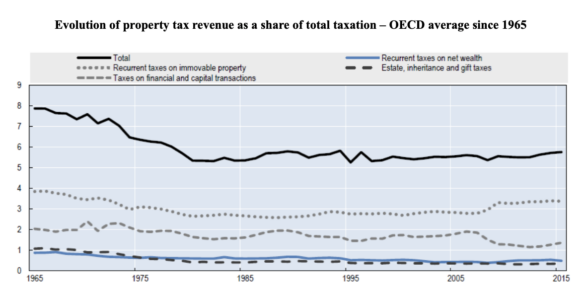 There is no doubt that wealth mirrors taxpayers’ ability to pay better than other measures such as income. There is also no doubt that private wealth is much more unequally distributed than income, and that the dispersion in the distribution of wealth has been increasing in recent decades. Hence, although property taxes still account for just a little share of governments’ revenues in OECD countries, pressure for a new tax strategy is mounting.

Some facts about property taxes in OECD countries 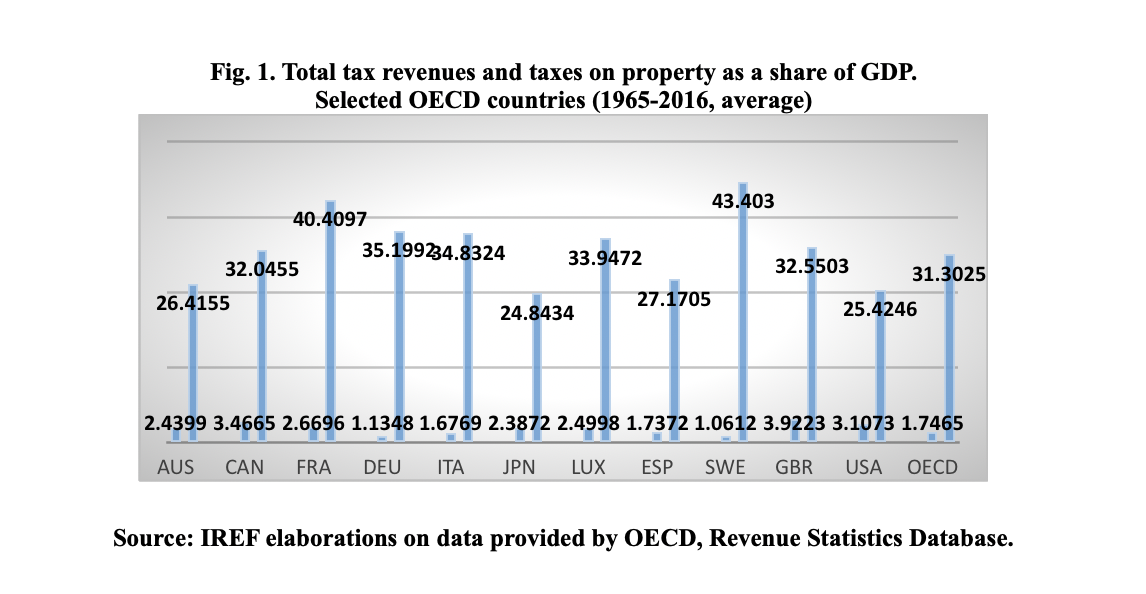 Indeed by considering the evolution of property tax revenues as a share of total taxation in OECD countries (Fig. 2), one easily realises that there has been a slow but persistent decline between 1965 and 1985. Since then (mid ’80s), property tax revenues have remained constant, accounting for about 5.5% of total taxation, although their composition has, to some extent, changed. 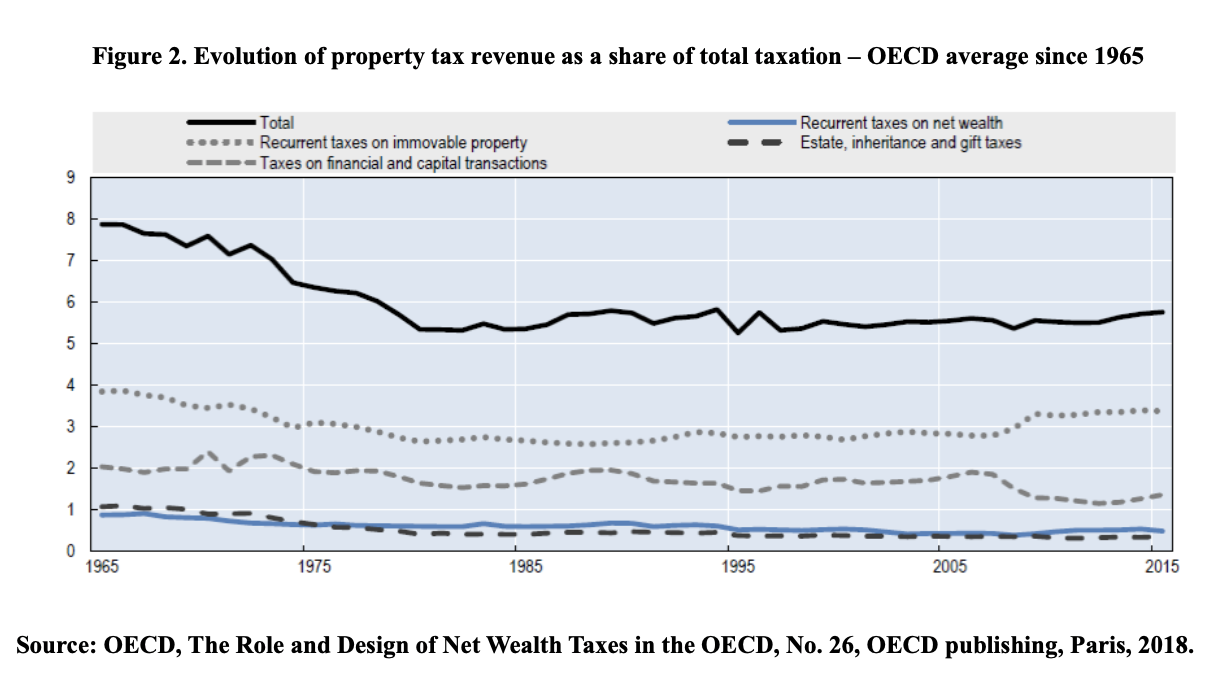 In particular, at the time of the latest financial crash (2007-2008) the revenues from taxes on financial and capital transactions dropped. However, this drop was more than offset by an increase in recurrent taxes on immovable properties. 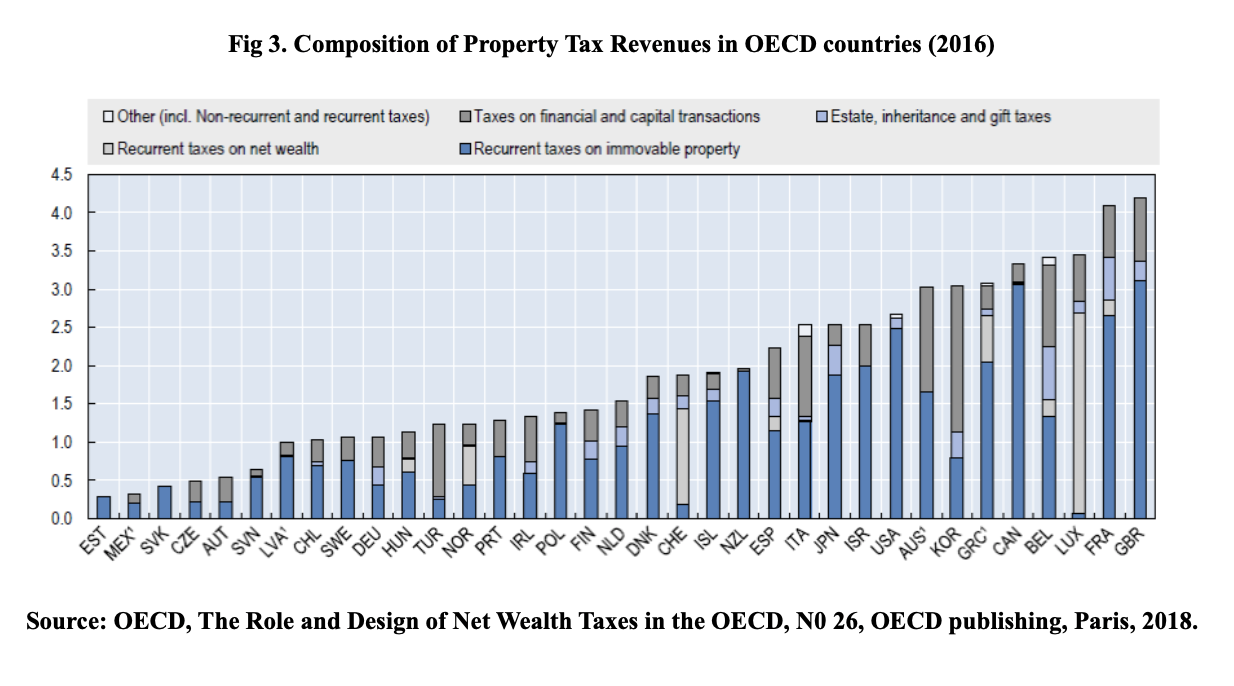 Yet, there are also other reasons why taxes on immovable property are so popular among the OECD bloc. First, the tax base is very large, as housing is the main form of wealth across households in advanced countries. Second, recurrent taxes on immovable property may be tolerated more easily if they are levied locally, and justified by the provision of services by the local authorities.

The Role and Design of Net Wealth Taxes – a report recently published by the OECD – argues that the authorities should resort to taxation in order to address the rising of wealth inequality, and makes a case for raising taxes on total net wealth. In particular, the OECD perhaps believes that there may be a stronger justification for levying a net wealth tax especially in countries where a dual income tax system is in force, i.e. capital income is taxed at flat rates or capital gains and inheritances are not at all taxed; or in countries featuring high levels of wealth inequality, provided that the purpose of the policymaker consists in narrowing the wealth gaps.

A poll recently conducted by the New York Times has indeed shown that a majority of people support Democratic proposals to raise taxes on the wealthiest Americans. Taxing wealth is the key idea Sen. Elisabeth Warren has embraced in her presidential campaign, an idea echoing the proposal of influential economists such as Emmanuel Saez and Gabriel Zucman, both at the University of California, Berkeley. Actually, support for taxing the rich cuts across party lines: a majority of Republicans also support proposals to tax the wealthiest Americans on their net worth.

Beyond the technical difficulties that a tax on net wealth could present, one wonders whether this would be a viable way to distribute the tax burden more appropriately. From a classical-liberal perspective, the taxation of wealth is not necessarily to be viewed with disfavour, and could actually be preferable to taxing income. Rather, the key point is whether the proceedings of a tax on net wealth will be used to rebalance the tax burden and the opportunities individuals enjoy, or whether the introduction of such a tax will simply increase the amount of resources available for politicians’ rents. As the OECD itself remarks, efficiency and equity do not justify a net wealth tax in addition to broad-based personal capital income taxes and well-designed inheritance and gift taxes. Instead, taxation on net wealth should replace the current wealth taxes. 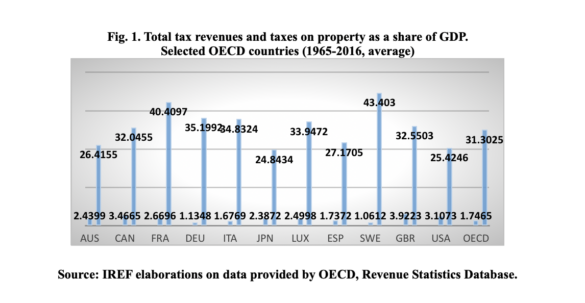 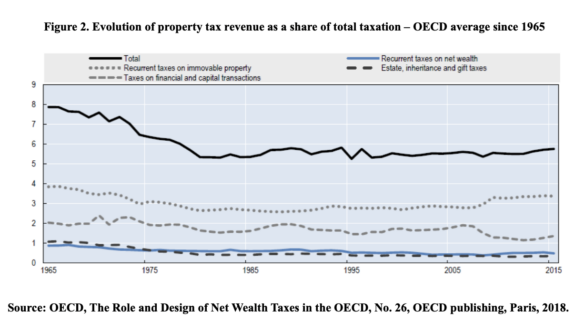 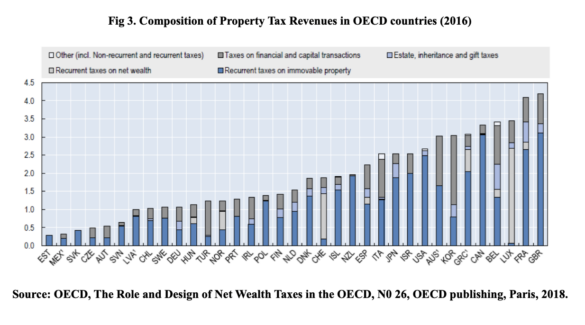