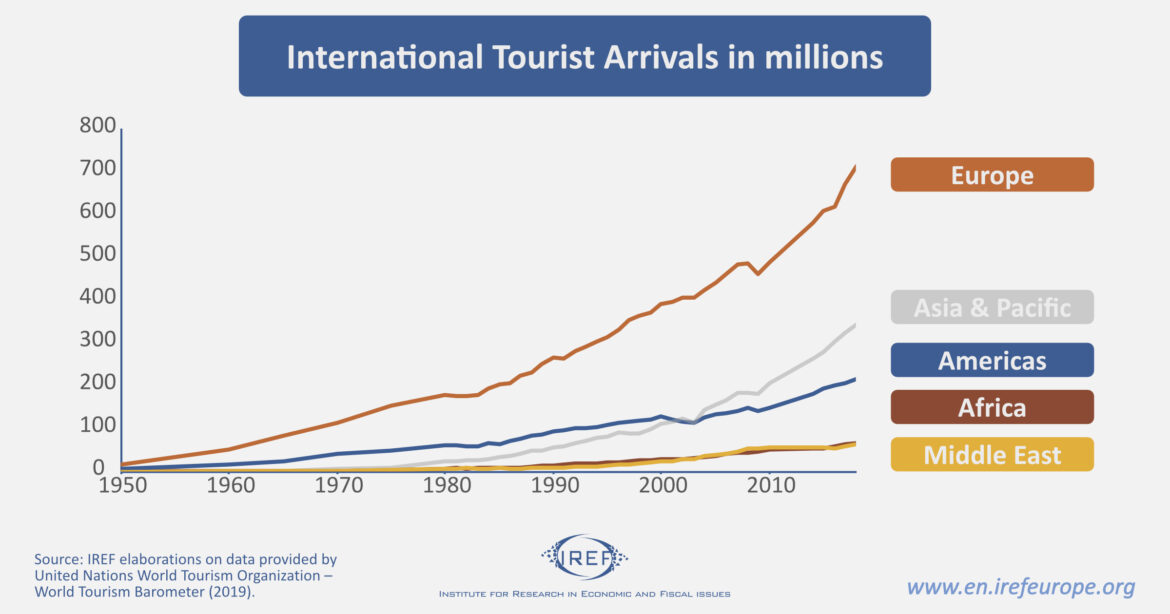 Tourism positively affects the balance of payments, attracts new foreign direct investment and is key to stimulating economic development and cultural change in many countries. Its contribution to alleviating poverty is also significant. For every job directly created in the sector, about 1.5 additional jobs are created. In 2019, approximately 330 million workers were employed in the tourism industry worldwide. This amounts to about 10.3% of total global employment (6.9% in OECD countries).

The Covid-19 Pandemics has dramatically shaken this sector, and changed the economic and psychological affect consumers’ behaviour. The former are mainly associated with the reduction of households’ income worldwide following unemployment or cuts in working hours. As far as the tourism industry is concerned, the European Commission has estimated that since June 2020, 6.6 and 11.7 million jobs have been – and will be — lost. This is a large figure, which clearly depends on the fact that tourism is a labour intensive sector characterised by small or medium-sized companies with fewer than 50 employees. Certainly, size makes them more vulnerable to crises. Of course, the dynamics of tourism affects other sectors of the economy such as transport and travel agencies. For example, Airbnb cut employment by 25%.

Psychological factors are also important. In a recent paper, a group of researchers from the University of Naples surveyed how fear of COVID-19 contagion affected the consumption patterns of 3,000 Italian households. The findings suggest that such fears have limited the effectiveness of policies aimed at stimulating consumption during the pandemic.

The tourism industry before the pandemics

Before the Covid-19 outbreak, tourism was growing fast. Fig. 1 illustrates the dynamics of tourist arrivals by world regions since the end of WWII, which was enhanced by two components. One was the spectacular surge in per-capita income registered in North America, Europe and Asia & Pacific. The second is better and cheaper transportation. 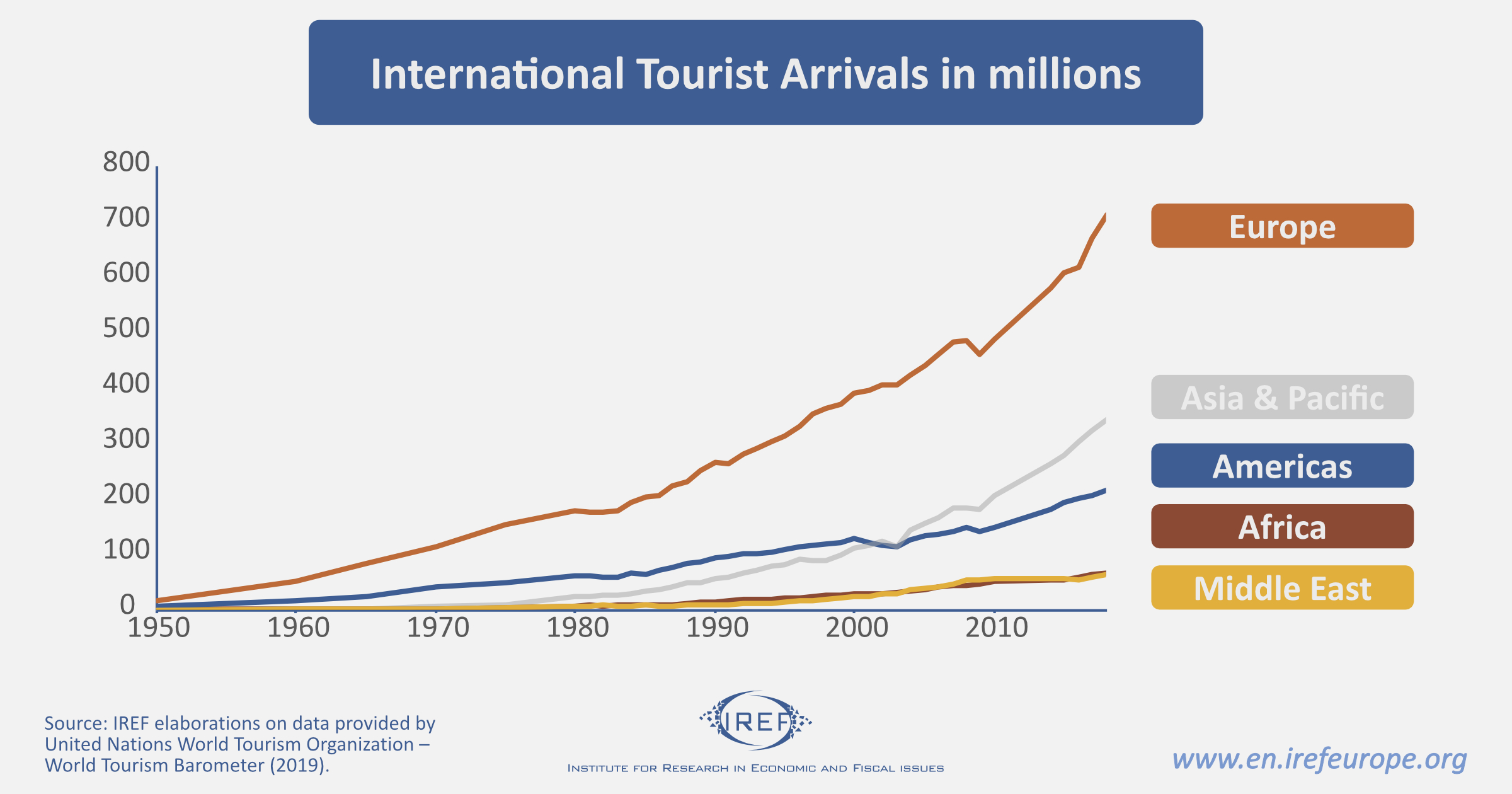 In recent years, the trend shown in Fig 1 was also affected by the development of information and communication technologies. The digitization of many steps in the tourism supply chain, the so-called e-tourism, has allowed suppliers to meet demand more easily through the worldwide web. The reduction in costs and prices that has followed has further boosted demand.

In brief, the tourism industry seemed more prosperous than ever in recent years, with excellent growth prospects despite slow economic growth in many advanced economies. Moreover, larger and larger portions of the population in newly industrialized countries have reached income levels that allow them to devote more resources to leisure and holiday making. Similar comments apply to the old age pensioners in the rich countries, whose income is fed by generous insurance schemes and have plenty of spare time.

Governments all over the world have adopted measures to subsidise the tourism industry. New lending facilities have been made available, lower interest rates and extended guarantees on existing credit lines have also been introduced. According to the International Labour Organization additional measures have targeted the labour market: subsidized paid leave for workers employed in companies that had to shut down; financial support to firms that refrained from laying off employees; tax moratoriums and extended deadlines for social security contributions, wage subsidies, loans and guarantees for workers.

All this paraphernalia must not obscure some simple facts, however. First, all supports to the tourism industry must be temporary. Governments cannot keep subsidizing forever an industry that in many countries generates over 10 per cent of GDP. If the crisis caused by the Covid-19 outbreak lasted beyond 2021, the tourism industry will (at least temporarily) shrink. In fact, the response to the crisis must also come from within the industry. The new digital and green solutions and business models offer interesting opportunities that in some cases have already been explored. According to the Italian Startup Tourism Association, two firms out of three have developed at least a new product or service during the emergency. For example, some firms have implemented interactive gamification services (i.e., services that make use of game-design elements in non-game contexts: website, online communities and so on), distance learning and innovative online contents (including storytelling) for museums and cultural activities; others have converted shuttle buses and offered safe transportation for tourists and employees to new destinations. Airbnb has created Airbnb Rural Bootcamp, a training programme designed to help rural communities and entrepreneurs to familiarise with the new technologies. In general, about one-third of the startups internally revised their value proposition. In other words, a crisis is not only a time of misery and scarcity, but also an opportunity to redesign the future. 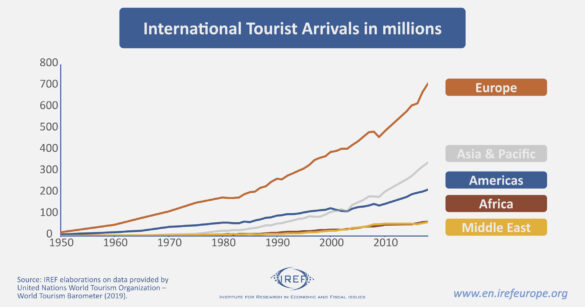