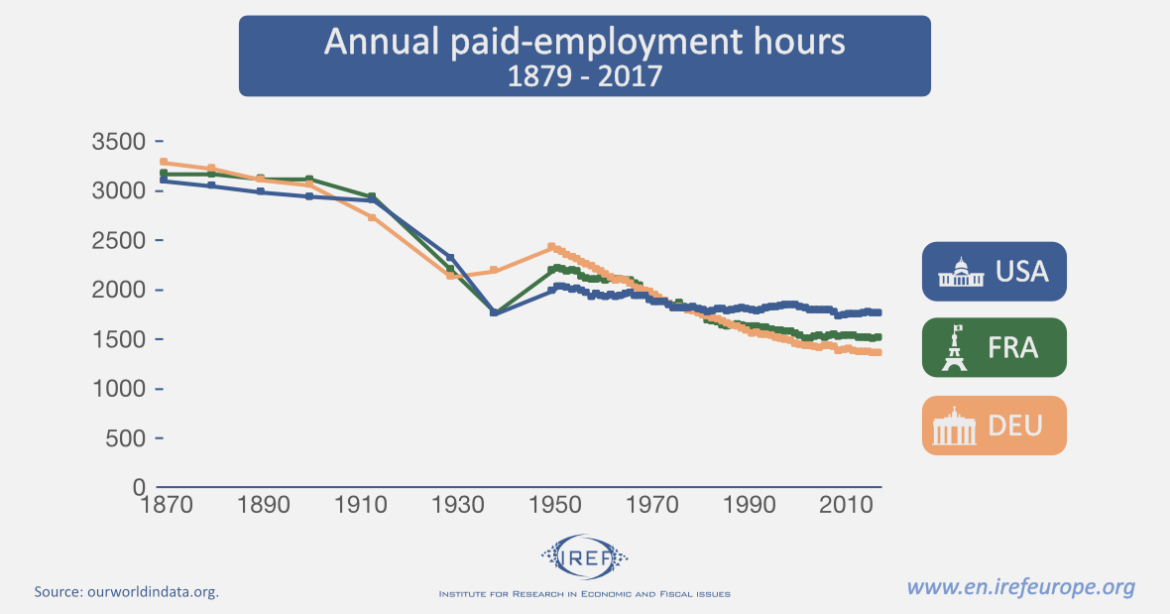 A four-day workweek or Universal Basic Income (UBI) straight away? Demands for shorter labour time, preferably complemented with compensatory wage increases, are a must-have for any electoral campaign. But do we really work more, at the expense of time spent with the family or leisurely activities? Do we really need new regulation to cut our working hours? While some workers do work long hours, generalisations are dangerous, as documented by the statistics on how we spend our time. Germany offers an interesting case study.

A closer look at Germany

After the fall of the Berlin Wall, in 1990/1991 and 2012/2013 the Federal Statistical Office conducted two surveys on how Germans spend their time.

In 1990/91, every German worked on average 3 hours and 14 minutes a day. The relatively low average number of hours worked results from considering not only the full-time working population in the average but also part-time employees and those who are without a job such as pensioners or students. In 2012/13, this figure decreased by 16% to 2 hours and 43 minutes. In 1990/91, men spent 4 hours and 25 minutes working; in 2012/13, they worked 25% less (3 hours and 19 minutes a day).

Compared to men, the average time women spend working has remained almost the same, with a slight decrease of 2 minutes to 2 hours and 9 minutes. One reason for this could be that the female labor force participation rate has increased considerably more than men since 1991. Despite the increased labor force participation among women, a trend toward less working time per day can be observed for the population as a whole.

But how do we spend our time when we do not work? In fact, (paid) work absorbs only a small fraction of the Germans’ day and comes fourth on the list of their activities. Most of the time they sleep (8.5 hours a day, on average). The second-largest amount of time is de-voted to household chores and the family. In 2012/2013, Germans spent on average 3 hours and 7 minutes per day on household activities, which is half an hour less than in 1990/91. Playing around with the social media absorbed about 3 hours per day, half an hour more than in 1990/91.

The time spent on sports, hobbies, and playing games decreased slightly from 1 hour and 8 minutes to 59 minutes, which can be explained by more intensive media consumption through mobile phones, tablets and computers. Time spent on educational activities re-mained stable at about half an hour per day. To summarise, we spend more time on pleas-ant activities such as hobbies or social life, and less on paid work and housekeeping.

Working time at a historical low – not just in Germany

Let’s take a wider look. Apparently, the trend towards less time spent on paid work outside one’s own household is not a recent phenomenon. Actually, the daily working hours of full-time German employees decreased by almost 60% since 1870. A similar development char-acterised other countries, too. In France, hours spent on paid work annually decreased by over 50% since 1870. In contrast with Germany, however, the French figure has remained constant since 2000. In the US, there has been a decrease of over 40% since 1870. All three countries are now at a historical low with regard to working time, while since 1870 real GDP per capita increased fifteen-fold in Germany, twelve-fold in France, and eleven-fold in the US.

The decrease of annual hours spent on paid employment has not only been accompanied by a decrease in weekly hours but also by an increase in days entirely free from paid employment, such as annual leave or bank holidays. The number of days off increased especially in Germany and France. For example, while the average German full-time employee had on average 13 days off in 1870, this figure rose to 43 in 2000.

Employment – the centre of our daily lives?

Despite the prevailing view that employed work dominates an increasing portion of our daily life, it takes up less of our time than in the distant and proximate past. We work less and have more days off.

At the same time, material wealth has increased significantly. This justifies expectations about future wealth increases with fewer working hours. The upshot is that we hardly need regulatory intervention to stop an alleged trend towards increasingly longer labour time. 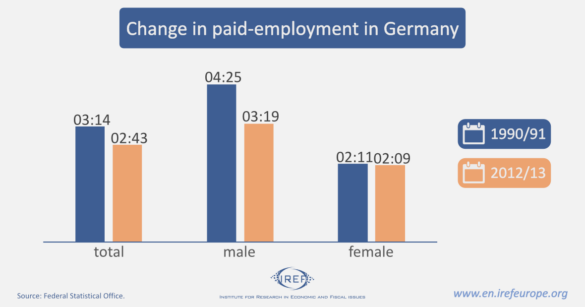 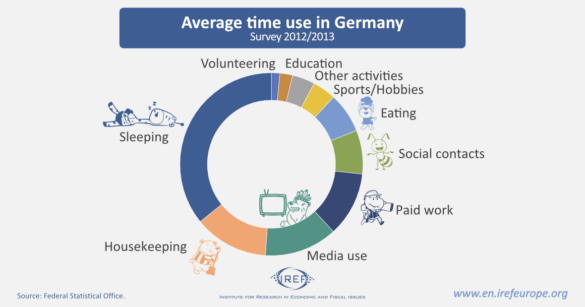 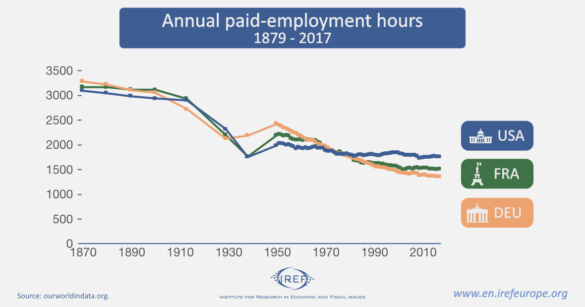