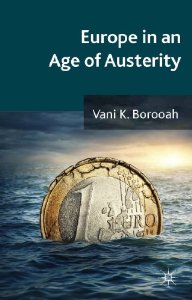 Two years ago, prof. Vani K. Borooah published a working paper for the IREF with the warning title “When the Lights Go Out“. We are pleased to announce that the working paper has been since extended into a fully fledged book, now published by Palgrage Macmillan.

The book is now available from Amazon.

Europe in an Age of Austerity provides an in-depth discussion and analysis of the broad issues that have underpinned the current European economic crisis. It also offers detailed analysis of the experiences of three countries – Greece, Ireland, and Portugal – that had to be bailed out by the “Troika”. It examines four elements of “crisis” which have dominated the debate about recessionary Europe: the housing crisis, the banking crisis, the sovereign debt crisis, and the austerity crisis.

The book challenges the popular view that today’s economic crisis in Europe is a sovereign debt crisis. The author argues that today’s economic crisis is a derivative of private sector overspending which existed long before the present recession began in 2008. This overspending went unnoticed as the European Monetary Union’s single currency regime had no automatic signals for warning in the event of private sector overspending. A major fault of the Euro is revealed, showing an economic system which lacks the adjustment mechanisms that countries with sovereign currencies take for granted.

While there is much literature available on the problems of the US economy, there is relatively little focus on the Europe’ economic crisis. This book aims to fill this gap, as it offers insight into Europe’s current economic problems.

Vani Borooah, who was born in India, is Emeritus Professor of Applied Economics at the University of Ulster, Northern Ireland; Adjunct Professor at the Indian Institute of Dalit Studies, India; and Honorary Professor of Economics at the University of Queensland, Australia. He is also Member and Secretary of the Royal Irish Academy. He has been President of the European Public Choice Society and of the Irish Economic Association.