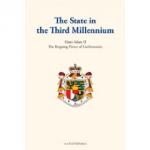 Prince Hans-Adam of Liechtenstein is able to look at the modern nation-state from many different angles: as a head of state; as a politician, who had to win popular votes in a direct democracy; as a businessman active in different continents; and as an historian who has studied the influence of military technology, transportation and the economy on the workings of the state.The State in the Third Millenniumanalyzes the forces that have shaped human history in the past and are likely to do so for the foreseeable future. These include religions, ideologies, military technology and economics.

Prince Hans-Adam explores ways to make the traditional democratic constitutional state both more democratic and more efficient. He also discusses strategies on how to realise worldwide the modern democratic constitutional state in the third millennium. He observes that citizens should no longer be viewed as servants of the state, but rather that states be converted into benevolent service companies which serve the people as their customers.This is an elegant, original and lucidly argued work which will attract all students and observers of modern statecraft.

Why Government Spending Does Not Stimulate Economic Growth: Answering the Critics

Taxes Around the World