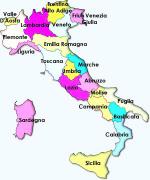 The free-market view is in general in favour of decentralization. By and large, the rationale behind this claim is that decentralized taxation and spending imply greater accountability for politicians and public officials. In turn, greater accountability generates less corruption and better services to the community. The authors of this paper suggest that this claim needs to be taken with caution, since the quality of the local institutions significantly affects the outcome of fiscal decentralization (spending performance).

In order to illustrate this point, they consider a set of 348 municipalities in a number of Southern Italian provinces. Fifty-nine of these municipalities have been identified as “institutionally weak”, since they have all featured strong interference by Mafia-type organizations. The behaviour of these weak municipalities following a change in fiscal legislation is then compared with that of the other 289 local administrations.

These results have important explanatory implications, in that they explain why in several countries featuring federal constitutional arrangements or multiple layers of government, decentralization has generated disappointing results. More in general, however, this work underscores the role of accountability and shows that decentralization is a necessary – but not sufficient – condition for better expenditure. When the local authorities are captured by local oligarchs, the world of politics ends up serving the interests of these coalitions, rather than of the public at large. Put differently, there may be situations in which sub-national decision-makers have an incentive to misbehave and engage in various forms of corruption, while the citizens’ participation to the political process remains weak. Under such circumstances, decentralization can actually make things worse.

Effects of taxation on European multi-nationals’ financing and...

Individual responsibility and social preferences for redistribution: an...

Fiscal Rules vs. Political Culture as Determinants of...