What the Rich are Good For 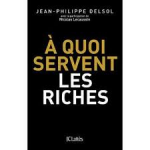 Advocates of redistribution often reckon that soaking the rich would eliminate poverty. Consider the following: the 10 largest fortunes in France amount to 14 per cent of GDP, or 272 billion euros. If we imagine a one-off redistribution of this wealth to the 8.2 officially poor, the sum awarded to each would be some 33,000 euros. Not bad, but certainly not enough to retire on.

Entrepreneurs are driven by profit, but they also produce wealth for others in terms of employment and innovation. The market also continually provides spontaneous redistribution (e.g. Bill Gates and Warren Buffett donating most of their wealth, far more than any amount spent by the United Nations on the same charitable causes). Moreover, a third of the largest 500 fortunes in France have been created by self-made entrepreneurs unheard of 10 or 15 years ago. The wealth gap is closing: the poor everywhere are a lot better off today than a decade or two ago.

The rich serve another important purpose, namely financing the brunt of government spending. The 10 per cent earning the highest incomes pay almost three quarters of the income tax (in a country where practically one household out of two pays none at all); this figure has been stable for the past decade. This has not stopped the government from implementing 22 new taxes or tax hikes on high-income earners in the past five years. The 30 per cent wealthiest households pay 87 per cent of the total income tax revenues. And the 1 per cent richest households represent a third of net government revenues on income. Therefore, taxing the rich even further may reap a few short-term electoral gains; but big pains beyond the next election. And the hens that lay the golden eggs fly fast these days.

Before dreaming up new ways of punishing wealth acquired in the market place, we would do well to look at politicians and civil servants who thrive on taxpayers’ money. Their pay and benefits often by far exceed those of the entrepreneurs. Whereas the latter earn on average 3,000 euros a month, a French senator gets 7,000 euros and substantial perks besides. A member of the European Parliament may earn up to 28,000 euros a month for a few days’ work. Similarly, average wages in the French public sector are now higher than in the private sector.

Implementing the flat tax as suggested by the authors would be a vastly more effective way of creating transparency and fiscal justice, making taxation neutral and putting a price on public services. Getting rid of the myriad of tax exemptions, or privileges, would also bring in substantial revenues (69,1 billion euros). As shown by the numerous flat tax experiences (United States, Central and Eastern Europe) this would be beneficial for economic growth and tax revenues alike.

IREF launches a petition against a new European treaty

IREF’s Bestseller: “Why I am Going To Leave...

IREF Yearbook on Taxation in Europe 2012