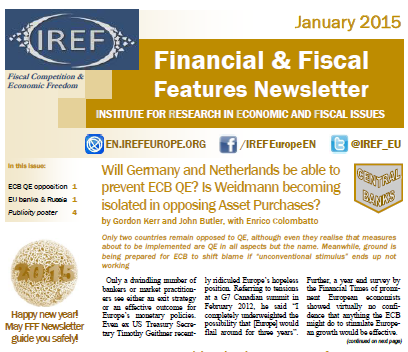 Only two countries remain opposed to QE, although even they realise that measures about to be implemented are QE in all aspects but the name. Meanwhile, ground is being prepared for ECB to shift blame if “unconventional stimulus” ends up not working.
— – Russian sanctions work. Or so we are led to believe. However, it would be a mistake to underestimate the preparedness of EU banks (and bankers) to sidestep official sanctions and participate on the market. After all, Russia’s collateral may be sounder than that of EU governments…

iref_fffn_15-01_january_2.pdf “Financial and Fiscal Features” Newsletter is a monthly publication by the IREF. It brings latest inside information from the world of central banks and financial markets, both of which are increasingly intertwined with fiscal issues. You can find the latest issue in the .PDF file. It can be either read on your screen/e-reader or printed out. You can print it out either on normal A4 sheets or on a single double-sided A3 which can be folded to make a simple “newspaper”. The last page has been specially formatted so that it can be printed separately on a self-standing single sheet and pinned to a public notice-board at your place of work or learning, if you think it is appropriate and if you think others would also benefit from what we have to say.