The European Banking Can Nears the End of the Road

The Credibility of Central Banks is Irreparably Damaged. Critics of Policy Grow as More Evidence Emerges that European Banks have not Recapitalised.

The ECB has lost control of Europe’s financial crisis and the euro project is unworkable in its present guise, according to Otmar Issing, the first chief economist of the ECB[[http://uk.businessinsider.com/otmar-issing-analysis-on-future-of-euro-ecb-house-of-cards-will-collapse-2016-10]]:

“One day this house of cards will collapse… Realistically, it will be a case of muddling through, struggling from one crisis to the next. It is difficult to forecast how long this will continue for, but it cannot go on endlessly.”

Before turning to Europe’s beleaguered banks, it is worth noting that the credibility of not only central banks, but also of supranational institutions such as the IMF, the OECD and the World Bank, has been seriously damaged by the now apparent collusion to mislead the UK public with a series of pre-referendum scary predictions about the immediate aftermath of a June vote for Brexit. The pseudo-science of their elaborate models, the often condescending manner of the warnings and the complete lack of contrition or apology for such transparently political behaviour has attracted strong media ire[[http://www.telegraph.co.uk/business/2016/10/29/invoke-article-50-quickly-and-make-a-clean-break/]].

This may be the most significant consequence of the Brexit vote, exposing central banks as merchants of spin, willing to say anything to please their political masters. Commentators and the general public are starting to suspect this. Until recently, central banks’ unconventional policies have been generally accepted on the grounds that they prevented a banking collapse AND helped banks recapitalise, even if the side effect was to encourage governments to gorge on debt. With the EuroSTOXX bank share index down 30%, and no end in sight to the problems of every Italian and some German banks, mainstream media are beginning to realise that they have been led a merry dance by the ECB and Bank of England’s stories about bank recapitalisation.

We have always argued that the bank bailouts since 2007, without any reform of the perverse incentives, were a mistake. Consequently, there has been no material systemic recapitalisation. Multiple large banks remain insolvent, but of course it is in central banks’ and policymakers’ interests to pretend they are recovering. Nine years ago, the collapse of Britain’s Northern Rock bank should have been jumped upon by regulators as an indicator that conventional measures of bank health were unreliable. Central banks then knew that banks, thirsting for growth, had become far too large and were using far too much debt. But instead, central bank chiefs yielded to the temptation to support the bogus industrywide ‘recovery’ story, and nowadays the authorities recommend further consolidations to enable troubled banks to be absorbed by supposedly safe ones, an example being rumours about Unicredit and Société Générale.

The European Banking Authority recently admitted it has bent the rules to flatter Deutsche Bank’s stress test results, including an asset sale which did not take place until after the reporting deadline . We maintain such actions are the norm, rather than the exception. On a system wide basis, central banks have been determined to help banks present themselves as healthier than they are. Most bank related “reforms” fall into either of two categories of rules and policy: each of which had to be boosted in order to mask bank insolvencies:

a) Stress tests have replaced published accounts, given widespread realisation that IFRS accounts obscure insolvencies[[http://uk.businessinsider.com/deutsche-bank-special-treatment-ecb-stress-tests-2016-10]]. But the stress tests suffer from regulator bias[[file:///C:/Users/Gordon/Downloads/LAPFF%20Sorry%20Wrong%20Number%20press%20release%20-for%20LAPFF%20website.pdf]].
b) Central bank liquidity. Classically this should be provided only to solvent banks against high quality collateral at a penal rate of interest. The ECB has applied opposite policies on all three counts.

What is the ECB likely to do next? They have little choice but to double down on their present path and look for opportunities to blame policymakers for failing to enact structural reforms. The ECB’s specific problem is that banks have recently turned against the very policies introduced to save them. Banks are blaming low interest rates for lack of profits, when the reality is that all participants in the derivatives business will have been booking exponential profits as the yield curve has flattened. Today’s profit (or loss) on a derivatives book is determined by calculating the net present value of future expected revenues, and comparing it with yesterday’s. With term interest rates moving downwards and now close to zero, there will have been a steady stream of recorded profits from this “mark to market” exercise, exclusively due to the fall in term interest rates. But of course, these points are not well understood and the media have swallowed the story that the modest degree of net interest margin suppression is a major cause of banks’ difficulties.

However, recent events from Italy, perhaps indicate that the ECB is deeply worried about losing further German support. Last month, we reported general concerns about a securitisation of non-performing loans for a small Italian bank. As we explain in the next section, further concerns about the artificiality of the transaction are emerging. Indeed, we now understand that the ECB will not allow the senior bonds to be used as eligible collateral for ECB Repo facilities and qualify for freshly printed central bank money. Who does the ECB think it is? Having established rules specifying that investment grade notes will be eligible, upon what basis does it now seek to discriminate against bonds guaranteed by non-performing loans (NPLs)? Does it not trust the rating agency methodologies?

MPS and Unicredit to follow in the footsteps of little Bari. 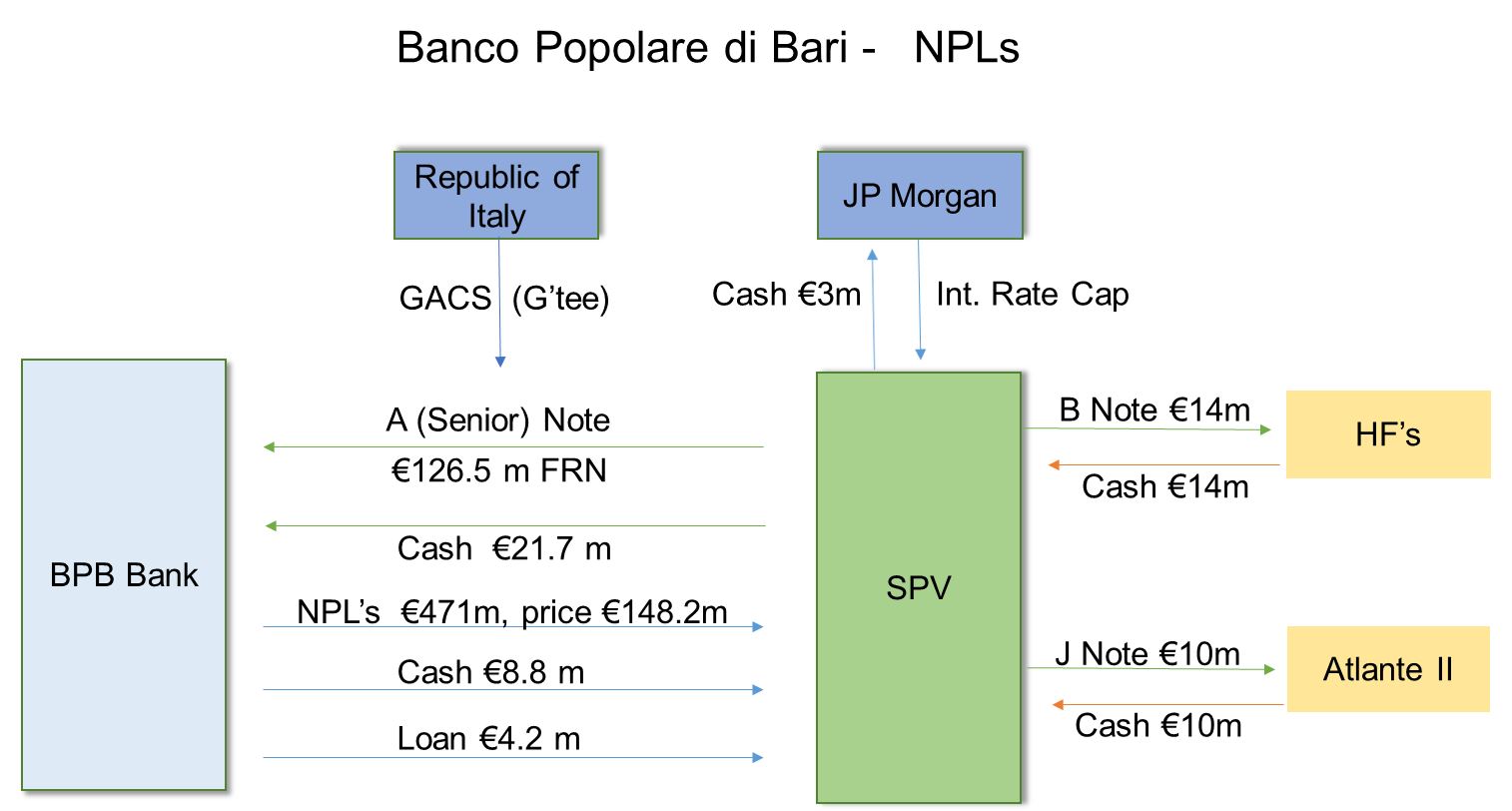 As the diagram shows, the Bari transaction is a self-securitisation in all but name. Euros 139m of the Special Purpose Vehicle’s 148.2m purchase price, or 94%, are funded by the bank itself through a combination of loans, cash transfers and the purchase of the senior note. Only the subordinated tranche – 14m of funding, or 10% of the price – could be described as a market transaction. There is very little risk transfer, and Bari itself has provided a first loss buffer of cash equity amounting to about 5.4% of the price.

Why has a seriously troubled bank such as Bari gone to such lengths and expense to attract only euros 14 million of market funding? Officially, the purpose is to create a secondary market in Italian NPLs. But if such investment appetite truly exists, why does Bari not simply sell into this market? What is the purpose of the ‘securitisation’? It seems that the overriding purpose is to remove the NPLs from Bari’s books and in a way that boosts its reported capital levels. Accounting firm PriceWaterhouseCoooper has formally opined that under IFRS accounting rules, Bari should “deconsolidate” (ie remove) the NPLs from its accounts.

For Basel risk weighted asset ratio purposes:
BEFORE securitisation, assuming that Italy operates a 12% capital regime, given that NPL’s probably attracted 100% risk weighting under the Basel rules, Bari would have been required to demonstrate sufficient capital (i.e. limitation to debt leverage) of 12% x 148.2m = euros 17.8m.

AFTER the transaction, BP Bari owns a bond guaranteed by Italy, therefore riskless under Basel rules. It has extended a small credit facility to the SPV, let us assume this requires capital of 0.5 m.

Therefore, Bari will be able to spend or release over 97% of the capital it previously had to demonstrate was allocated to these NPLs. This is decapitalisation, not recapitalisation, and will not please the Bundesbank who still sticks to the line, based on Basel measures, that banks are recapitalising. Andreas Dombret, Executive Board member of the Bundesbank stated on October 27th[[http://www.bis.org/review/r161028a.htm]]:

“The repercussions of the financial crisis and clean-up operations are still putting a strain on all parties involved. EU banks have since strengthened their capital positions, which now stand at more than 15%. Prior to the crisis in early 2008, the same ratio was 6 percentage points lower. As the phase-in of the new regulatory environment continues, difficult times still lie ahead. Let me add: This isn’t bad news. It is largely still part of the expected clean-up operations after the financial crisis.”

Banca Monte dei Paschi di Siena (MPS) plans a similar exercise, involving euros 28 billion of NPLs being ‘sold’ at 33% of face value. This is part of its new business plan which includes branch closures, redundancies, and the ‘mass digitisation’ of low value ordinary business. Interestingly they forecast a more than doubling of NPL recoveries from 3% to 8.5%, perhaps having learned about rating agency expectations for the Bari deal. The plan openly explains how an NPL transaction will boost reported capital ratios. Investors are unconvinced. In the last week of October MPS’ share price was volatile, even being temporarily suspended after an intra day 23% fall, and remain 75% down from the start of 2016. It is only a matter of time before Unicredit and other banks follow. We believe the rating agency forecasts are too optimistic. Italy’s GDP has suffered a 10% fall since 2007 and it is estimated that 20% of industrial capacity has been lost. Italy would be better off closing failed banks than supporting these sham securitisations.

For now it appears the ECB will continue to try to tread the fine line between pleasing the governments of Italy and Germany. Ironically, Deutsche Bank itself has been charged by the Italian authorities for its role in falsifying MPS’ books in 2008 and another large misconduct fine is expected. We expect the governments of both countries to take an increasingly close interest in events, and prepare individual national contingency plans if they lose further confidence in the ECB. 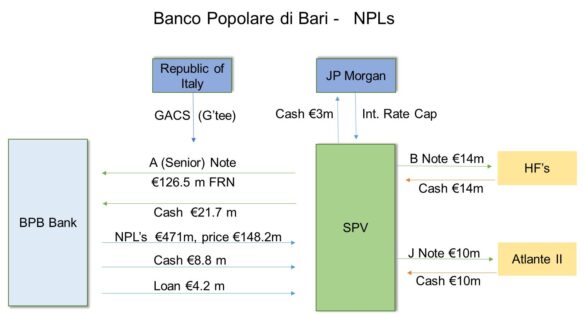 Speculation: Beneficial to the Market Economy