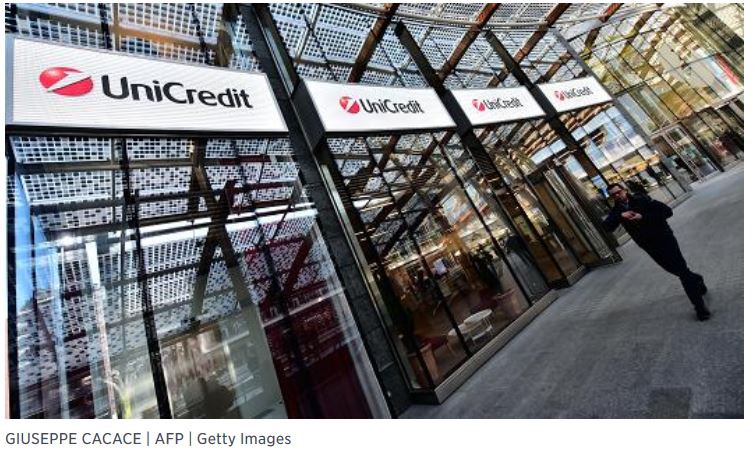 Unicredit’s well-publicised rights issue was reported by the press as a resounding success. Underwritten by Morgan Stanley and UBS, the €13bn issue, priced at a 38% discount to the bank’s theoretical value before the rights, closed early. Some big Italian investors publicly declared their intentions early; Fondazione Cariverona pledged to subscribe for 73% of its 2.23% stake, and Fondazione Cassa di Risparmio di Torino pledged to inject €320 million, the rights attached to its 2.5% stake.

These and other investors appear to be impressed with the determined actions of the new chief executive, Jean Paul Mustier. Since his appointment in December, the ordinary shares have risen in value by 40%. The rights issue success appeared to underscore the remarkably fast turnaround story.

However, the prospectus for the rights issue (1,100 pages long) reveals some interesting accounting features:

i) The rights issue has an odd structure; 13 new shares are offered for every 5 held. Usually such issues are the other way round, typically 1 new share for every 4 held. On its face, a company looks in deep trouble if it needs so much new cash compared to the capital upon which its business has been based for many years;
ii) The 2015 Unicredit accounts stated (page 34)[[https://www.unicreditgroup.eu/content/dam/unicreditgroup-eu/documents/en/investors/financial-reports/2015/4Q15/UniCredit-SpA-2015-Reports-and-Accounts.pdf]] that its shares ‘have no par value.’ Yet the accounts accompanying the prospectus refer to 670 million existing shares with a par value of €20.8 billion (€33.73 per share). The new rights issue shares are assigned a value of €8.09, of which €0.01 is described as the Share Capital value, and the balance of €8.08 recorded as share premium. How can two parcels of supposedly fungible shares bear different capital values?
iii) The Prospectus provides copious financial information on the condition of the bank as at 31/12/2015, 30/9/16 and at 3/3/17, the last date upon which investors could choose to subscribe to the rights issue. Why not present information as at the standard 31/12/2016 year-end?
iv) Unicredit’s reserves are shown as €12.1 billion as at 30/9/16. Elsewhere buried in the prospectus is a reference to a write-down of reserves in recognition of bad and doubtful debts, in the amount of €12.2 billion, such write-down being booked after 30/9/2016 but before year end. The accounts to 30/12/16 have not yet been issued. Now we understand why. It would not have been a great selling point for the rights issue had investors realised that €12.2 of the €13 billion rights issue cash has already been written off.
v) Whilst Unicredit’s Italian loan book before this write-off was already poor (22% doubtful debts) even by Italian standards (average 17%), a further concern is that investors have no information on the quality of the loan books of its subsidiaries and joint ventures in other European countries. Unicredit does not fully consolidate its subsidiaries. If these subsidiaries are carrying losses anywhere near the levels that Unicredit the parent is, its capital post rights issue would be wiped out.

Why have investors enthusiastically injected two and a half times the capital that they otherwise stood to lose in a bank in such poor shape with so little information about the carrying value of problems in a range of other European countries? There are two possible reasons that occur to us:

a) Unicredit is Italy’s largest bank; were it to fail and not be bailed out then the country’s banking system (if not Europe’s) might collapse;
b) As we have explained the carefully constructed Italian plan to transfer the problem of its vast (€360 billion) non-performing loan burden onto all holders of cash euros via the ECB’s printing press (repurchase mechanism) looks likely to be about to incept.

This is likely to give the ECB a new problem. With inflation in Germany, a net exporting country, increasing to 1.9% per annum in January[[http://www.politico.eu/article/ecb-has-an-inflation-problem-called-germany/]], the ECB will soon be forced to choose either to let inflation soar or to change its repurchase rules, and face the consequences of overt systemic banking failure in Italy.