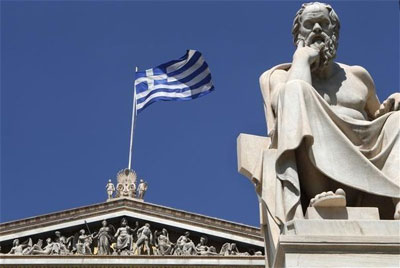 While Ireland may exit its bailout program at the end of this year, Greece is far from getting out of it. Around 10 to 11 billion euros ($13.1-14.4 billion) from the second half of 2014 will be needed to keep it going next year and in 2015. This will be the Third Act of the economic tragedy unfolding in Greece. Jeroen Dijsselbloem, Dutch Finance Minister, confirmed to the European Parliament that “as far as the potential need for a third program for Greece is concerned, it’s clear that despite recent progress, Greece’s troubles will not have been completely resolved by 2014”.

“It is realistic to assume that additional support will be needed beyond the program. In this context, the Eurogroup has indicated clearly that it is committed to providing adequate support to Greece during the current program and beyond until it has regained market access”, added Jeroen Dijsselbloem.

But, in front of euro zone governments’ reluctance for a third bailout, Dijsselbloem made things clear : “The Eurogroup agreed last year to consider additional measures if necessary, such as further reductions of the interest rates on Greek loan facilities… if Greece were to meet precise conditions”.

But it will not change the fact that taxpayers of other euro zone countries, such as Germany, are tired of bailing out other countries. It has been three years that these bailing out are going on and it seems endless.

Taxpayers are right to be tired. As pointed out in a previous article on this third Greek bailout, two important issues are still not answered:

– 1- On what legitimacy are the Euro Zone’s national Governments using their taxpayers’ money for a non-domestic issue?
– 2- Is bailing out working?

In other words, it is wondered what kind of legitimacy, if any, has the Eurogroup to use taxpayers’ money?

Jeroen Dijsselbloem did not say a word on that issue. But ignoring this issue may well transform this Greek tragedy into a European tragedy.

September’13 Newsletter: Have We Really Turned The Corner?