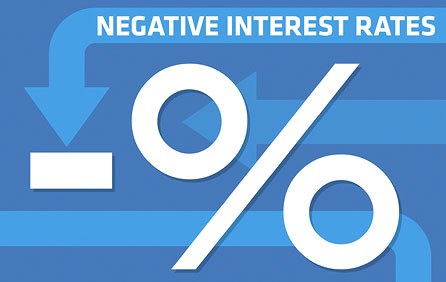 Negative interest rates here, there, everywhere. What used to be taught as “impossible” in textbook is now a reality throughout the EU. And for the first time it even affects corporate bonds, not just “safe” sovereign ones. Why would anyone lend more than they receive, when they can just hang on to cash? We explain.

There is something rotten in the state of Denmark’s financial market; or so it may appear. It was the first European country (in recent years) that started to witness something which wasn’t supposed be possible: negative interest rates. Since then, they have been spreading to other countries’ bonds and earlier this month they made history by affecting even a corporate bond (of Nestle). Why would anyone lend €100 to get back €90 (if at all), when they can just keep the €100 in their wallet?

We review the reasons for today’s low interest rates, and show that there are actually good reasons, under the circumstances, for lending at less-than-zero. However, albeit rational and legitimate, negative interest rates do suggest that there is something rotten. Only not in Denmark, but in the Eurozone.

How is a negative interest rate born

An interest rate is essentially a price. Price for making lenders willing to give up their cash for a while; the price of time. Just like any other price, it depends on the current balance between suppliers and demanders. When the supply grows, the price keeps dropping to attract the scarce borrower, and there is essentially no reason why the price should stop at 0.

Actually, Denmark has rich experience with negative prices for another product: energy. It has many wind power stations, and when the wind blows across the Jutland peninsula, there is more energy created than is wanted. Since it cannot easily be stored, Denmark pays its neighbours (through a negative price) to take away some of that energy from them (so that the grid does not collapse).

Lending is no different. When large supply of cash meets low demand for cash, the price of cash may go below zero, and you will essentially pay someone to hang onto your cash. Now let’s consider the reasons for the supply and demand situation.

Why is there big supply of cash?

• Flight from Eurozone. Notice the main countries experiencing negative interest rates recently: Denmark, Switzerland, Sweden… All outside the Eurozone. As the uncertainty over its future rises, investors try to pour their liquidity into alternatives, to hedge their bets. These countries face large sums of cash being supplied to them.

• Quantitative Easing. The ECB can increase the money supply (as part of its general “caretaking” for the currency) through various ways. Unfortunately, these are less effective at low interest rates, so now it has taken the unprecedented step of essentially printing new currency (Euro is fiat money). Specifically, it is trying to encourage banks to lend to businesses. The problem is, this is risky for the banks (especially during a slump) and not attractive when “safe” lending to governments is still yielding positive returns. To reduce this “competition”, the ECB buys sovereign bonds (with newly printed money), increasing their price and decreasing the interest rate (yield).

• Institutional investors. Pension funds, for example, are either regulated or self-regulated to park a proportion of their funds in “safe” hands. These prescriptive rules do not usually consider the interest rate of doing so. As a result, they “have to” supply the cash even at negative interest.

Why is there small demand for cash?

• No new bond issue. There is plenty of demand for cash by European governments – just not the ones that people want to lend to. Some governments (what used to be called PIGS, for example) do not have to fear that their interest rates fall to zero because risk premium is a part of the final nominal rate. But even these heavily indebted governments are currently demanding little cash as they are running against the constraints of the maximum permitted size of their deficits and debt. So they demand less borrowing.

• Death of some bonds. Some countries have even stopped net borrowing completely. Germany, often serving as a yard-stick for pricing European governments’ bonds, is running a budget surplus.

• Lacklustre private investment. The size of European debt is increasingly dominating the market for cash, but we must not forget the “traditional” demanders: private businesses who want to invest in new technology or general expansion. Except for some hot-spots in Germany and perhaps the UK, however, the lack of business confidence in the rest of Europe means that the demand for investment cash also remains low.

So far we have considered the reasons why market conditions lead to a negative interest rates. But for an actual loan to take place, it must make sense for the lender. How does it make sense?

• Safety. As far as we can tell, the earliest “banks” did actually charge a sort of negative interest rates. In the often lawless world of yore, you’d be willing to pay a specialist (with strong arms) for the service of guarding over your cash. In today’s uncertain world, it is beginning to make sense again to actually pay someone (with reasonable reputation) to save you the trouble of stuffing cash into a mattress.

• Exchange rate yield. People are buying up debt in certain currencies “no matter what” the interest rate is, because they are hoping to make money on future exchange rate changes. Take Switzerland, for example. Even when you pay CHF 100 today to get CHF 90 tomorrow, that CHF 90 may actually be worth more in your currency. A few years back, the Swiss Central Bank adopted a policy of artificially cheap Franc. Given the relative health of the Swiss and EU economies, it must have been clear to lenders that this policy is unlikely to be sustainable forever and the Franc will return to a float, much stronger (as we have just witnessed).Merely hanging onto CHF in cash for the period is not all that easy, or cheap, so some small nominal “loss” through a negative interest rate on a Nestlé bond is just an “admin” price for making that “deposit”.

• Obligation. If you are a bank and not an individual, it “makes sense” because you are obliged to “park” some of your cash with the central bank, who is then free to charge negative interest rate (and frequently does nowadays). The penalties for not fulfilling such “reserve ratios” are even worse than the interest you are losing.

Only future will tell how permanent is the world of negative interest rates. Perhaps it will disappear with European recovery, if and when it comes. There are worrying signs, however, that it may be here to stay, very arbitrarily.

a Cobden Partners fan…
I have been following Gordon Kerr for several years now…always a breath of fresh air compared to the wing nut hive minded Paul Krugmans' of the US establishment that dominate the prime time financial entertainment theatre on US state networks. Our heavy handed Demander and Chief is now in bed with Iran but I still believe central banks are our greatest risk to private law abiding citizens in every country that hold assets in fiat currency…I would love to read a Cobden article advising dual citizenship / asset protection / how to prepare for the coming credit / equity market collapse???