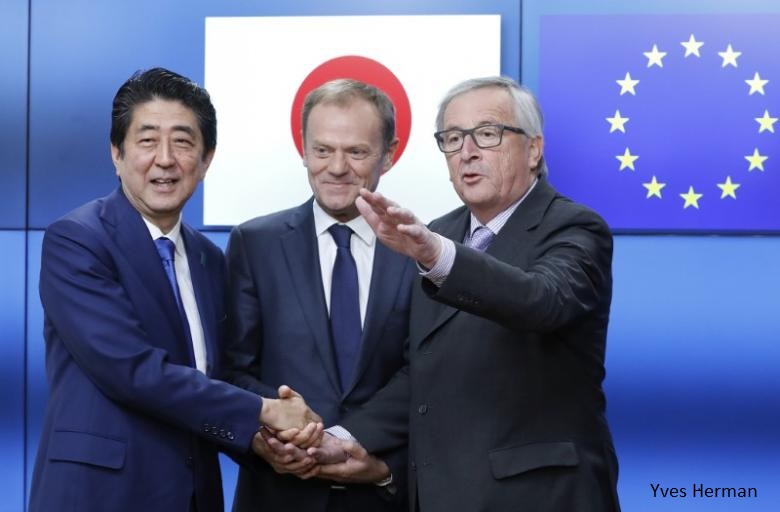 The recent EU-Japan free trade agreement will bring significant economic benefits to the EU. More importantly, the Agreement also indicates a change in the EU’s stance toward globalization and trade partnerships. While relationships with historic trade partners (the US and the UK) appear to be deteriorating, the EU seems to have acquired awareness of its essential role of free-trade leader and has now started to turn its interests towards Asia.

A step forward in favour of free trade

A year after the decision on the mixed nature of CETA, which risked undermining 5 years of negotiations with the Canadian Government, two events highlighted the important role played by the EU as a supporter of free trade. On the eve of the G20 held in Hamburg under German leadership, Angela Merkel met the Chinese leader Xi Jinping to lay the foundation of a trade agreement between the EU and Beijing, with a first phase focused on bilateral investments. A political understanding on a free trade agreement between Japan and the Union was also announced.

The EU and Japan- respectively disappointed by the US withdrawal from the negotiations on TTP and on TTIP – count for 30% of the global economy and already have close trade relationships. The EU represents the 3rd trade partner of Japan, which, in turn, is the 6th trade partner of the EU. As stressed in a joint statement following the 24th EU-Japan Summit on the 6th of July, “The highly ambitious and comprehensive Economic Partnership Agreement will bring our two economies closer by addressing issues related to market access for goods, services and investment.”, adding that the treaty “will constitute the basis for a strategic partnership for free and fair trade, against protectionism”.

The Agreement took 18 rounds of negotiations spread over 4 years. In brief, it should eliminate trade barriers between the EU and Japan and further enhance their economic relationship. In particular, the Agreement will provide:

1. the opening to EU companies of the services market (including finance and telecommunications) and public procurements (including the national railways and public services in 48 cities);
2. a high level of protection for more than 200 European geographic labels;
3. liberalisation in food and motor vehicles sectors.

The Agreement is clearly advantageous for the EU.
First, it implies a reduction of €1bn per year in tariffs paid by EU exporters to Japan. Additionally, according to estimates by the European Commission, the Agreement should lead to export growth of 34% for the EU (currently €58bn in terms of goods and €28bn of services) 29% for Japan. This will imply that the EU should benefit from an additional 0.79% growth in terms of GDP in the medium run. Currently about 600,000 European jobs depend on the export to Japan and Japanese companies based in the EU employ more than half a million people.

In this scenario, EU sectors that will particularly benefit from the Agreement are (i) processed food ; (ii) chemicals; (iii) electrical equipment.

An important change in the EU attitude toward free-trade partnerships

Leaving aside the extent of the economic benefits that the Agreement with Japan will bring to the EU, it is important to notice a change in the EU attitude toward free-trade partnerships. A year after the disappointment of Brexit and the growing populism that brought back protectionism to the EU political and economic debate, the resolute and proactive attitude of Brussels toward free trade and globalization is very important.

A key role has been played by Germany. This is not surprising, considering how trade is strategic for Berlin. But it is not just all about Germany. The Agreement witnesses to the fact the EU’s free-trade drive is alive and that the EU is aware that trade partners are all over the globe. In addition, the Agreement with Japan is particularly meaningful if we consider that in the past significant Japanese investments were directed to the UK. This new agreement may represent another heavy cost of Brexit for the UK.

Indeed, it is as if the combined effect of Brexit and the protectionist stance of the Trump Administration have given the Union the necessary awareness of its role as a global actor and, in particular, as an advocate of free-trade. It appears that what should have been a blow to the European free-trade project is becoming a source of cohesion, inducing the Union to look away from the Atlantic and toward Asian economies as key partners for the future.

The economic and political message to the USA and the UK is clear. The EU may have found the necessary cohesion and determination to take up the role of global trade leader for the future. If the Union continues on this path, new partners will come forward accordingly.