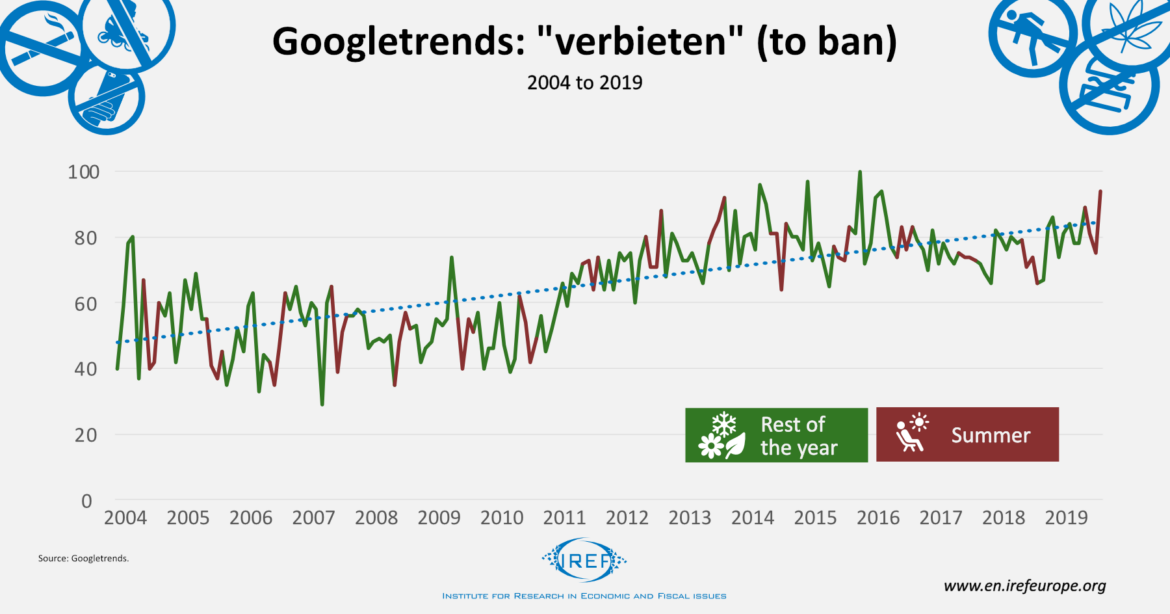 Summer is not only the season of swimming trunks and barbecues, but also of vociferous politicians. One of the warhorses of this year’s silly season are bans. Whether it is plastic cutlery, oil heating or domestic flights, calls for bans are becoming louder across the political spectrum. Bans, however, are usually not the best way to deal with negative externalities. Politicians can find calling for bans attractive regardless, provided the requested prohibitions match the preferences of their voters, or signal serious engagement. Moreover, by resorting to extreme positions policymakers try to expand their power and authority. Yet, although the demand for bans is frequently used as an instrument to gain votes, we maintain that the state should actually use them only on rare occasions.

Banning as a trend

Google is always well informed about what people want. When we notice the first symptoms of a flu, we ask the internet for advice. Hence, an increase in search requests is often a first indicator of a flu epidemic. According to Google search requests on ‘banning’, public interest in the issue is on the rise. This is not only the case during the silly season in summer and early autumn. An evaluation of minutes from the German Bundestag shows that ‘banning’ has also become fashionable in political debates. Compared to the first 20 years of the German Federal Republic, the word ‘banning’ has doubled its presence in parliamentary debates (see the figure below). 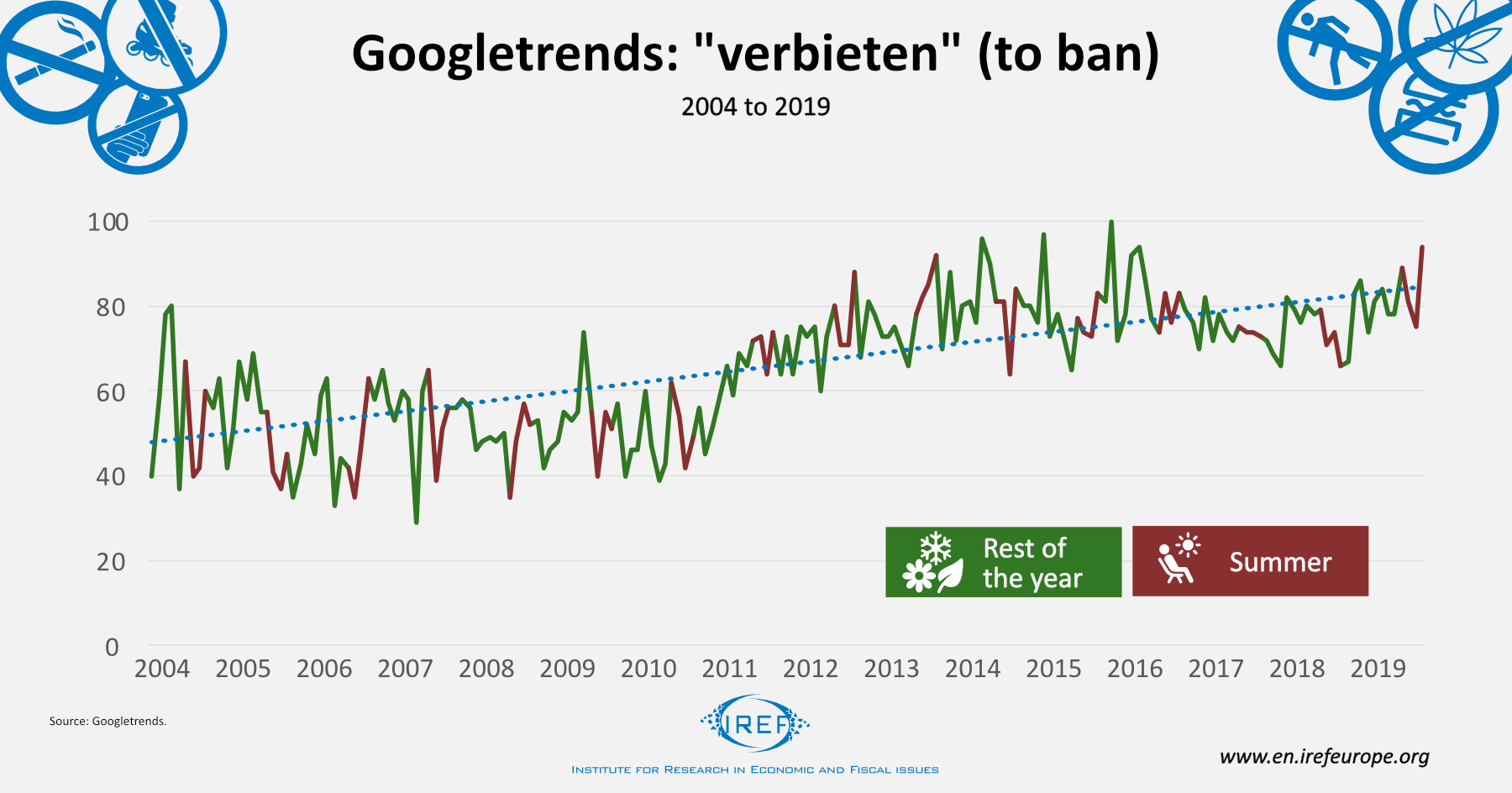 No alternatives to bans?

Bans are particularly popular in environmental debates: SUVs, domestic flights, combustion engines, and much more. One could get the impression that bans are an attractive instrument for climate policy and environmental protection. Yet, bans should be the last resort in the political toolbox to counter negative externalities, including environmental damage.

Externalities denote costs that are created by an individual/company and borne by third parties. For example, this happens when a person uses a car, but other people suffer from the consequences of air pollution. In general, the cost of reducing an externality rises with the size of the externality. While small portions of damage be eliminated without much effort, cutting more and more externalities involves increasing cost. This explains why it is often desirable to not completely eliminate an externality. Banning an economic activity can make it worse, as banning would eliminate the benefits of that activity.

To achieve the desired reduction of negative externalities, it is usually only necessary that their originator carries the full costs of his actions. In order to protect the climate, therefore, it would be sensible to burden polluters with the cost they are currently ignoring, for example via carbon emissions taxes or emission licenses. Private individuals and companies would then choose whether to pollute and pay the tax, or avoid polluting altogether. Undesirable effects on income distribution can be avoided if the revenue generated is not added to the state’s general budget but distributed evenly among all citizens. A pre-requisite for this, however, is the presence of enough political willpower to prevent the authorities from using the additional revenues to expand government expenditure.

There is always a good reason for a ban

If bans are not an effective instrument to solve environmental problems, why are they frequently demanded? Calling for bans can be beneficial to politicians for a variety of reasons.

Firstly, politicians can respond to their voters’ preferences by calling for bans. If their potential supporters object to what some other people do, calling for a ban can be politically effective even if the ban is not the appropriate thing to do. The distinction between real externalities and simple disapproval is difficult, as noted by economist Kenneth Arrow. The source of pollution is irrelevant for a ‘real’ externality. The emissions of vehicles are just as harmful as the emissions of domestic gas heating. If only one specific source of an externality is prohibited, then it is likely that external effects are just a pretext to justify a ban. The actual aim of the policy is to cater towards preferences of potential voters.

Secondly, politicians can call for bans to signal their own commitment and resolve. Politicians might actually go this way even when they are aware of the existence of better options. The only thing that matters in this case is that potential voters reward extreme positions during elections. If the requested ban is eventually rejected, politicians will still brag about their efforts to introduce them.

Thirdly, bans can be part of a political strategy, similar to a car salesman who goes into negotiations proposing an excessively high price. If politicians want to introduce stricter regulation, they can begin with very high demands in order to broaden the range of issues open for negotiations, and then strike a deal. For example, if a politician aims for higher taxation of domestic flights, he could publicly demand a ban on such flights, and then accept higher taxation as a compromise solution.

Unfortunately, bans appear to be fashionable. As mentioned earlier, many reasons encourage politicians to favour them. As voters, we should be careful before we support bans and reward ban calls during elections – even if we disapprove of the actions in question. Whenever externalities are light, we should be tolerant and recognise that the preferences of others often differ significantly from ours. When externalities are relevant, a ban should be the last resort; internalising the effects by means of pricing are usually preferable. 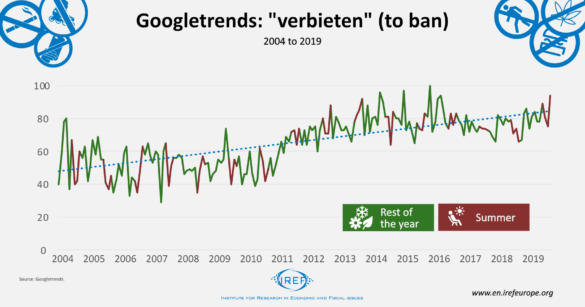