Copyright 2022 IREF Europe
Home » Are half of all jobs bullshit? Bullshit!
Online Articles 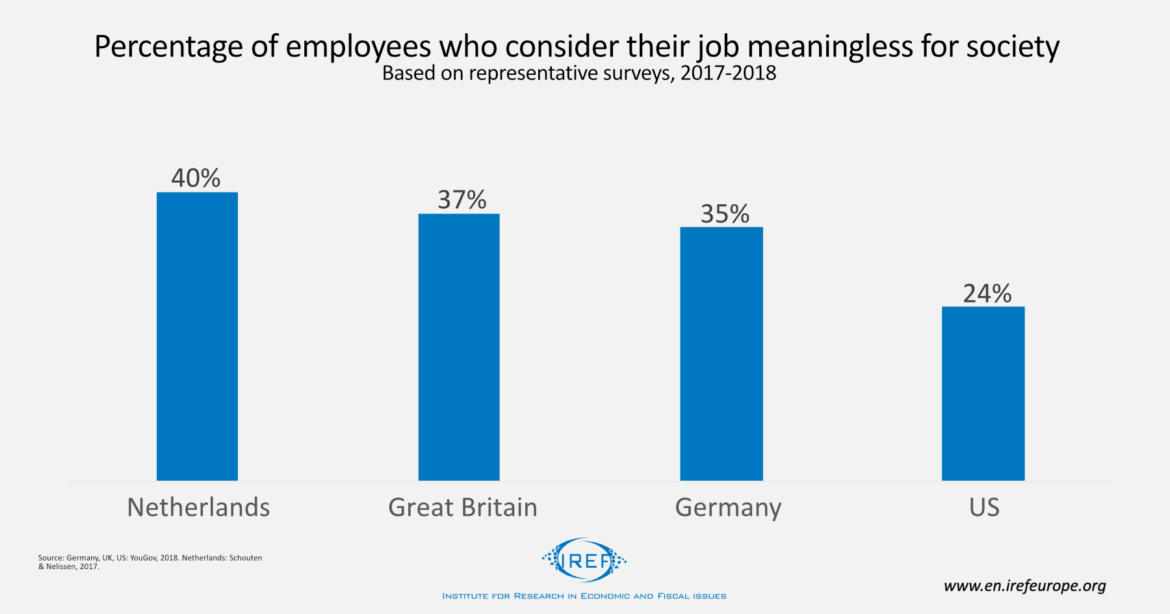 In the 2000s, a short book by philosopher Harry Frankfurt made the term ‘bullshit’ socially acceptable. In 2018, anthropologist David Graeber published his bestseller, in which he argued that roughly half of the employment relations in the Western economies are ‘bullshit jobs’: they provide no benefits to society and their purpose remains unclear even to those employed. Graeber’s hypothesis received much praise. After all, it addresses widely spread stereotypes about the alleged uselessness of well-payed jobs in the service sector, for example in marketing, management or consulting.

In a market economy based on voluntary cooperation, however, the idea that 50% of employees are permanently engaged in unproductive occupations sounds unconvincing. The high labour costs of inefficient companies would be reflected in high prices for their products. Consumers would have an incentive to switch to more efficient competitors, featuring fewer “bullshit employees” and lower prices. This does not mean that ‘bullshit jobs’ do not exist at all. Yet, they are presumably rare, and likely to be found in industries that do not let consumers punish inefficient suppliers, and force them out of the market.

Graeber defines ‘bullshit jobs’ not on the basis of objective criteria but by using the employees’ self-evaluation of how useful their activities are. He mentions surveys according to which roughly 40% of the employees involved in Britain and the Netherlands believe that their occupation “ does not meaningfully contribute to the world”. 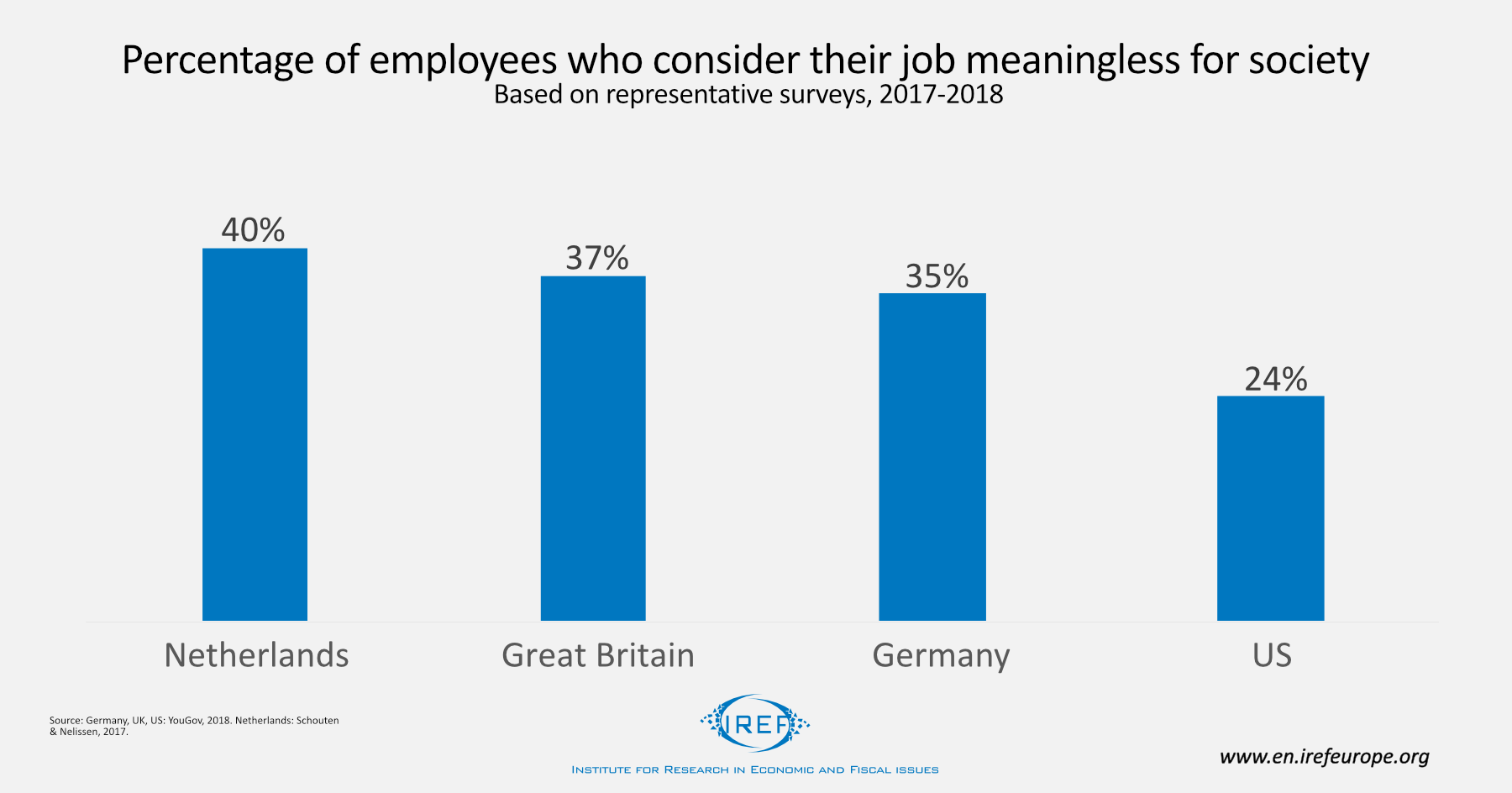 According to Graeber, the extent of unproductive labour is actually greater, since some allegedly useful activities merely support other, pointless jobs. Examples for this phenomenon would be sushi delivery drivers to law firms, security personnel in administrative buildings, or taxi drivers servicing lobbyists. Moreover, many really useful jobs are increasingly characterised by useless activities – for instance, doctors spend 50% of their time dealing with pointless paperwork. This explains why Graeber claims that about 50% of the employment relations in Western market economies are unproductive, i.e. useless ‘bullshit’.

Graeber cynically concludes that John Maynard Keynes’ prediction from 1930 – that the average employee of the future would only have to work for 15 hours a week – has indeed come true, and adds that these 15 productive hours are supplemented by 15 unproductive hours. While Keynes had faith in the efficiency of the market economies, Graeber fears an increase in unproductive occupations. He offers three possible explanations:

First, there appears to be “managerial feudalism” within many firms. Put differently, the surplus is not entirely translated into profits and investment. Rather, it flows into building a “court” of unproductive “footmen”, to enhance power and prestige.

Second, ‘bullshit jobs’ may serve those in positions of political power by accommodating and maintaining social tranquillity. People who work in a comfortable office do not question the economic order, even if their occupation is fundamentally useless.

Third, a deeply rooted work ethic leads employees to find more dignity in useless regular jobs than in being unemployed.

The question as to how unproductive employment relations on such scale can permanently exist in a competitive economic system remains unanswered. Companies which are less successful at fulfilling consumers’ demands at low costs will eventually disappear from the market.

Managers of selected companies might indeed desire to develop their own “court”, but it is implausible that business owners or consumers are willing to fund their managers’ aspirations via lower profits or higher prices. Similarly, it is unlikely that shareholders would be able to build cartels involved in useless production.

There is certainly room for waste and inefficiency in competitively organised economic systems, for instance due to principal-agent problems, information asymmetries, or competition for status. It is however unrealistic to imagine that this would lead to unproductive employment relations close to 50% of the total.

Specialisation does not mean pointlessness

Graeber’s theoretical arguments may be unconvincing. Yet, the fact that 40% of the employees consider their jobs useless is indeed problematic. Or is it not?
Probably not. In contrast with Graeber’s vision, employees are unlikely to be in a position to estimate how useful their activities are. Today’s labour markets feature highly specific occupations, which are only a small part of the complex production process typical of many goods and services. A traditional cobbler, who uses instruments and materials to produce a shoe from start to finish, can intuitively make sense of his work. A marketing employee of a large shoemaking business might have a harder time to recognise the contribution of his labour in the value chain.

In a society based on cooperation, in fact, the decisive criterion to measure the usefulness of a job is not an employee’s self-evaluation, but the willingness of others to pay. Consumers do not assess the contribution of every individual engaged in the value chain. Rather, they choose between different bundles of contributions as offered by competing suppliers. If consumers believe that the contribution of a marketing employee in one shoe company is useless, they will prefer shoes by companies that do not pay for ‘bullshit’ activities in their production process and can therefore offer their shoes at better value for money.

To summarise, markets and industries open to competition are unlikely to be burdened by ‘bullshit jobs’. Such jobs are more likely to prevail in areas in which consumers have little or no possibility to lower their willingness to pay, and thereby to send feedback to producers, who would then experience lower returns and increasing losses.

This is the case, for example, when privileged funding, harsh regulation or monopolies shield certain businesses from competition, and put them in a position where they can pass the costs of unproductive ‘bullshit’ on to consumers. The antidote is to open these industries up to competition. 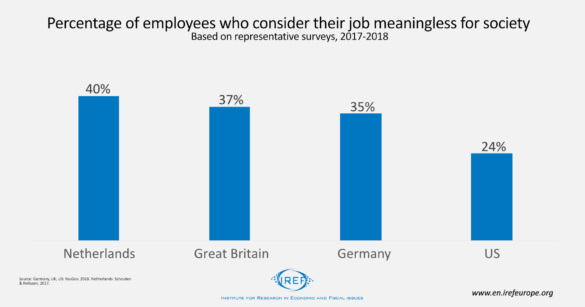