Are Members of European Parliament Smart or Dumb? 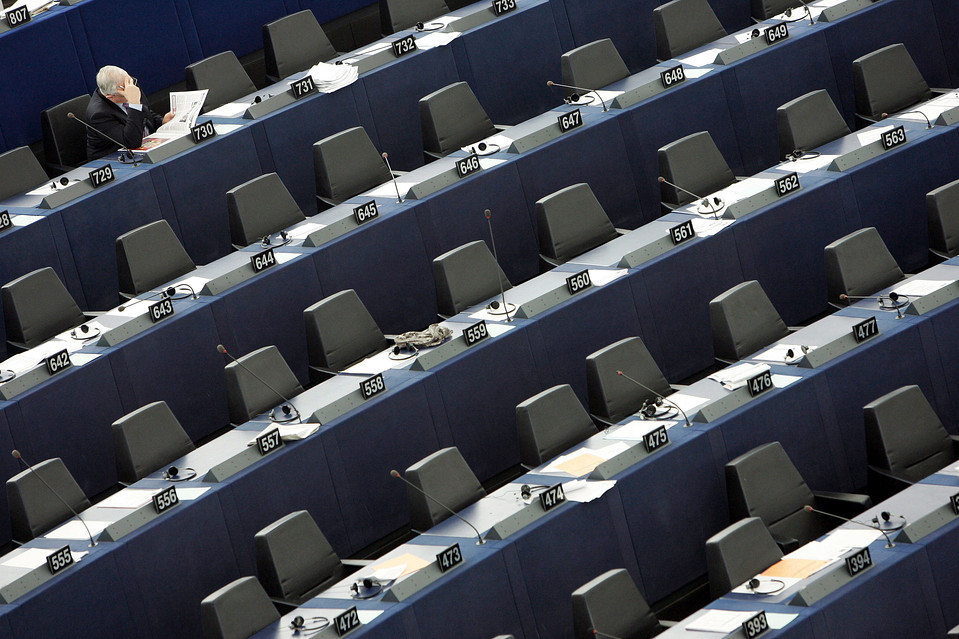 There seems to be a paradox at the heart of contemporary public policies in most European states towards employment. Although in principle both carrot and stick approaches are available in any situation, they tend to be applied selectively:

– Smart people have to be “rewarded” to make them work harder (by paying them huge bonuses, even in the public sector)

– Dumb people have to be “punished” to make them work harder (by removing from them any welfare benefits; of course we are not suggesting that people on benefits are dumb, but it is usually politely implied in public debate)

There is, of course, also a third category of people. These people are in paid employment even if they don’t show up, and when they do show up at work, they get paid even more. Let’s call such people, for lack of a more imaginative alternative, Members of European Parliament (MEPs).
One month remains until voters all across Europe elect a new batch of MEPs in European Parliament elections (May 22-25, in case you haven’t heard). Many televised public debates are scheduled among the presidential candidates, as if Europeans were electing a President (and as if there were an actual presidential post in anything more than name). The electorate – as responsible employers of their paid servants – should know, whether MEPs are smart or dumb, according to economic research and the above taxonomy.

Everyone knows that there is no point in asking people how they are going to behave in a certain situation or whether they will turn up to work. Since talk is cheap, House Theorem applies: Everybody lies. During an election campaign, this motto is on steroids (or at least on Vicodin). Economists know that they have to look at how people actually behave in the real world. But simple observation is fraught with difficulties called “selection bias” and “endogeneity bias”. Suppose that you, as a boss, set up a particular remuneration structure for your employees. Here are some useful considerations:

– You don’t want to tie all pay to performance: Things happen in life beyond control of your workers and why should they bear the risk and be punished or rewarded for them?
– Nor should you pay everyone a flat fee: Who would bother turning up to the Monday morning meeting, let alone think of something clever?

Whatever mix you choose, you will never know whether it is optimal. Perhaps only those for whom such structure is convenient apply for the job (selection bias), or they restructure their work to attain certain rewards with minimum effort (endogeneity bias). Either way, you will not know how they respond to carrot and stick and therefore whether they behave as if they were smart or dumb. What you need is a “natural experiment”.
Experimenting on people, in spite of its horribly sounding name, is actually good. (It can give you more productive workforce and you can share the fruits with them.) But experimenting in a lab in made-up situations that are designed to mimic the real world will give you only a biased picture: Only a certain kind of people will consent to be experimented upon (selection bias) and in spite of their best intentions they will behave strangely in a lab (even if you sensibly drop the white lab coat). Hence the “natural” nature required of a good “experiment”: let some random event change the rules and see how people respond.
This is precisely the approach taken by Messrs Mocan and Altindag when they analyse the relationship between salaries and work effort of EU parliamentarians. (Please note that there is no European endogeneity bias in their research agenda: they are at Louisiana State and Auburn universities, respectively.
Of course, under any normal system, when money is given to someone in return for no labour, service or thing, such money is not called “wage” or “employment contract” but “alms” or “beggar’s money”. But even beggars behave according to economic laws. (Please also note that in spite of its seemingly apt title, the paper “Estimating the yield of begging in Brussels” did not provide any inspiration for the present text.) In line with the best advice about labour contract design we have given above, MEPs have both fixed and variable components, and since we – as their employers – cannot effectively fire them for the duration, Mocan and Altindag sensibly classify the salary portion (for which no attendance at any session is required of MEPs) as “unearned income”, and the infamous per diem remunerations received when an MEP physically signs the register in the building are classified as the actual work-related wages.

Before 2009, MEPs were paid by their countries the same “unearned income” as their domestic colleague parliamentarians. This produced drastic inequalities among MEPs – a Bulgarian would be paid about € 10,000 per year whilst an Italian almost € 143,000, more than a thousand percent premium over a Bulgarian. In July 2009 salaries started to be paid by the EU budget and were unified at the highly scientifically determined of 38.5% of the salary of a European Court Judge, no matter where they came from. In reality, though, because of price differences across Europe, MEPs are still earning different real salaries, calculated on purchasing power parity, for example. Whilst for most MEPs their salaries in the summer of 2009, MEPs from Austria, Ireland and Italy saw their salaries cut as a result of the new rules. The relative salary changes are illustrated in the top left graph in the figure below. (Note that salaries are shown on PPP basis so they are not uniform across the EU even after 2009, though at least their variance has naturally decreased).
The top right graph then shows what happened to daily attendance at parliamentary sessions by those three countries’ MEPs, compared again with the rest. It increased sharply exactly around the time of the salary change. (Furthermore, this is unlikely to have been caused by change in composition of the population of MEPs in the post-change parliament. Most MEPs are re-elected, and the researchers found no relationship between how much MEPs stood to gain from the salary change and their voting record on this question.) 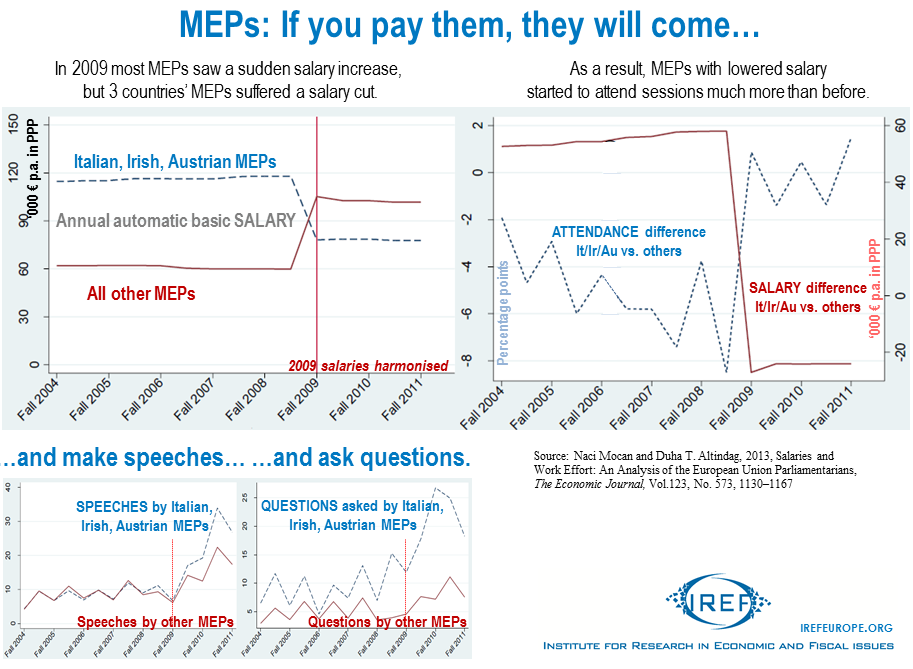 The graph can also be read in the opposite direction: if you don’t want MEPs to miss their parliamentary duties, don’t increase their salaries. For an idea of the scale of this effect, consider that increasing an MEP’s salary from €76,000 to €92,000 (which was the case of French MEPs, for example) results in approximately one additional day missed every year. There are some other factors determining attendance. It reaches its maximum around the age of 52 and is greater for longer serving MEPs and those from richer countries
But perhaps attending a session is not such a big deal. The costs associated with it are relatively low, at least, that is, if you happen to be signing your name in the register on a day when no journalists are present, otherwise some bad publicity costs must be reckoned with. Making speeches and asking questions on the floor of the House takes real effort, and here the researchers duly also find increased work effort resulting from salary cut, as the bottom two graphs in the figure show. (It should be noted, however, that no significant impact of the pay change was recorded on reports filed or acting as Opinion Rapporteur.)

We have only been able to consider an indirect link between pay, human capital and labour effort: Do MEPs behave like people with low or high human capital? There is almost universal agreement in empirical literature that people with low productivity tend to work more after you increase their salaries, or remove some of their non-labour income. Top performers, on the other hand, will tend to convert extra salary into an extra hour of golf. Of course we are not saying that MEPs are dumb. But evidence suggests that when deciding how much to work, they behave just like low productivity people.
Voters in the European parliamentary election in a month’s time need not despair, however. It does not matter that MEP’s behave like low-productivity workers. The important thing is that they behave economically, they respond to incentives. Therefore there exists a method of disciplining them into diligent attendance. Economists the only have to discover the direction of the relationship between reward and behaviour; discover whether MEPs yield to carrot or to stick. In this particular case, stick seems to work much better than carrot: pay cut increases our servants’ effort.
This is bad news for the European Common Agricultural Policy – subsidies for carrots would suddenly be justified for the first time in their history. But it’s good news for all sticklers for the truth. We can have hard working MEPs and save money at the same time. There may be such thing as a free lunch, after all. 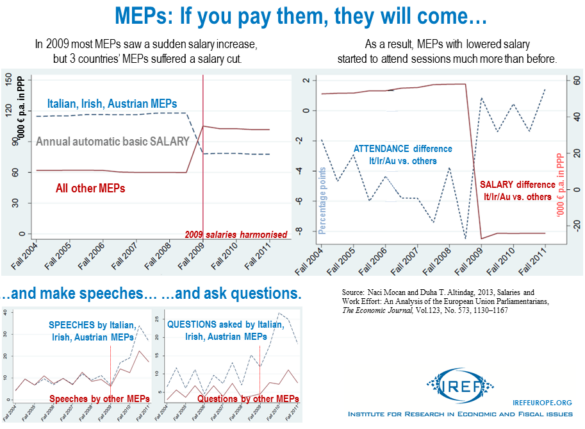 April ’14 Newsletter: Is the Recovery Sustainable?

Woes of Wolf of Wallstreet