Basic income is not so basic after all

Nobody likes poverty. But how do we end it? Suppose we give everyone some money. This will automatically include the poor, we don’t have to identify them, problem solved. Is it doable? Will anyone still work, create new ideas, write poetry, love?

The answer depends largely on how basic the basic income is, as we show.

When will the state give way under its own weight of regulation and bureaucratic malaise? When will people start relating to each other as members of the same species, not as those who pay taxes to the same government and therefore xenophobically hate those who pay their taxes to someone else?

We have known the answer to this question of Life, the Universe, and Everything, for almost a hundred years now: “The state will be able to wither away completely when society adopts the rule ‘to each according to his needs‘.“ This is a prophecy from one thinker close to anarchist circles by the name of Ulyanov. His first name was Vladimir and some readers may know him by his nom de plume taken after the easternmost great Siberian river “Lena”.

Of course his writings will forever be filed under the label “Utopia”, but that never prevented some people from actually trying to carry it out. Arguably the farthest progress was made in his last months by the communist dictator Ceau?escu of Romania. Romanian was a strange kind of communism. It was the only Soviet satellite that refused to invade Czechoslovakia in 1968 and to the bitter end it was desperately trying to be debt-free. While other “goulash communisms” (such as in Hungary) were happy to rack up huge international debts – which were after ’89 either forgiven or inflated away –, Romania stuck to its guns, at the cost of impoverishing its people.

The shadow of this experience must evidently be a long one. Why else would these days all the other governments within the European Union, Romania’s new home, be so fearful of actually living within their means? Or at least trying to live within their means? Or at least pretending to be trying? Clearly, they must think that not having debts makes you poor like Romania, and by absence of logic, that you can become wealthy by running up debts.

To these days one can see in Romania skeletons of unfinished huge concrete silos which were supposed to be great “granaries” for the people from which each would get food (and later also other goods) for free, according to their needs. For most other communist dictators of the ‘70s and ‘80s, achieving the communist motto was merely an allegory, only Ceau?escu took it literally. We’ll never know how long such programme could have lasted; the dictatorship fell before the first distribution centres were completed.

Fast forward a quarter of a century. Another dome is being built 2000km due West of Bucharest. This time it’s not made of concrete but of modern alloy metal, as 8 million 5 –centime coins are piled from a dump-truck outside the dome of the Swiss Parliament in Berne. This time round it was not aimed for public distribution, only a publicity stunt for campaigners for “basic income” who were submitting to the Parliament a box containing over 130 thousand signatures, enough to force a referendum on their proposition. (The Parliament now has a year to produce a report and a referendum is expected within two years.) Specifically, the proposition is to augment the confederate constitution with a new Article 110a which would read [German]:

1. The confederation guarantees that basic income scheme is established
2. The basic income should guarantee a dignified existence to the whole population and enable it participation in public life.
3. A law will specify the level of, and the source of financing for, such living wage. [translation IREF]

The campaigners want that every Swiss citizen receive every month 2,500 CHF (just over 2000 Euros) from other Swiss citizens. That would cover their basic needs (Switzerland can be an expensive country to live in – because so many people want to do that) and allow them to concentrate on “more important” things such as working for any extras they may want or simply enjoying life without the strife. As the campaigners’ materials proclaim: 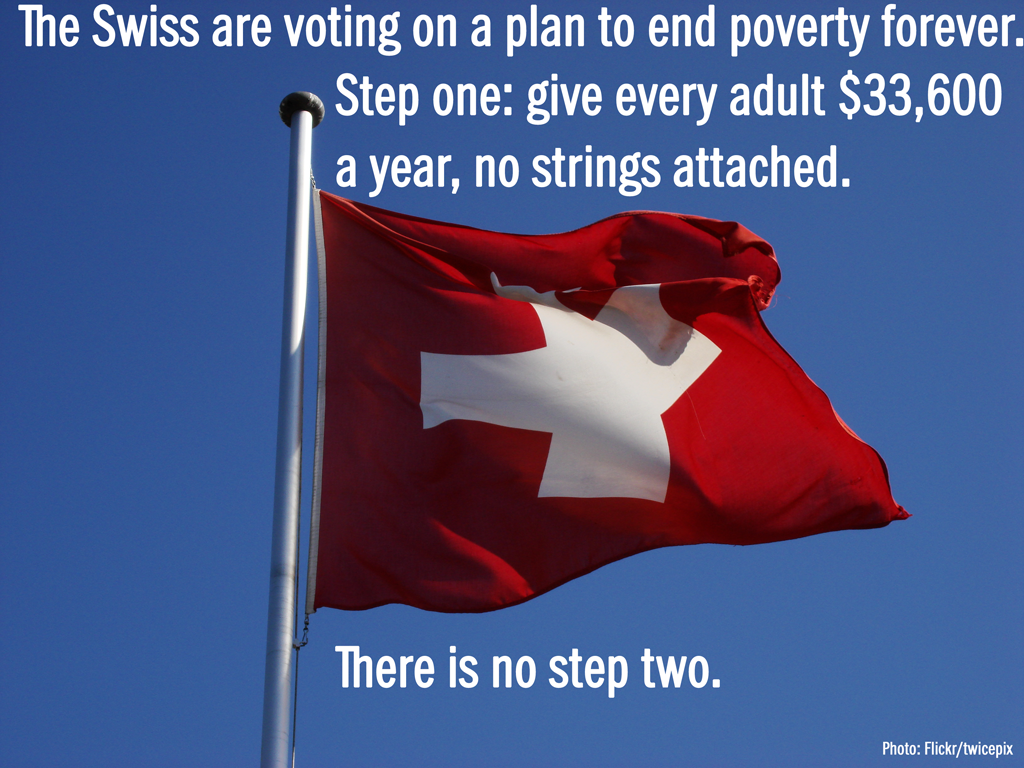 The Swiss are by no means the first to institute for this on the agenda, only the most democratic of European nations so there is a mechanism how to force such idea onto the unwilling politicians. But it is a part of a much larger wave emanating from around 2004 when originally European roots started to aim also at the rest of the world. (The idea itself is much older, naturally, and the term “basic income” was already used for example by Martin Luther King in his final book from 1967.)

The answer to the question “Would it work?” depends on the answer to a closely related question “Would people work?”. Clearly, until we get all our stuff from Star Trek-like replicators (and until replicators can replicate replicators), a lot of work is still needed from human beings. Proponents claim that basic income scheme will encourage work, while opponents claim that it will discourage work. In a wonderful twist, they are both right. How? They are both talking about different people. Not people with different preferences – anything, however bizarre, can be “explained” by assuming strange enough preferences. Preferences are the same and “normal”, involving standard assumptions that people want more stuff as well as more free time, unburdened with work. The difference lies in looking at different places on the spectrum of income those people command.

Who will work more under basic income? Imagine a person on very low wage, say the minimum wage legislated in that particular country. In the majority of European countries, the monthly income such wage generates (through a standard 8hour working day) still entitles the worker to receiving additional benefits from other taxpayers, which are means-tested, meaning that the person has to prove to the authorities that (s)he is poor enough. Naturally, at some point they are taken away as the person’s income increases – otherwise they wouldn’t be means-tested. But this removal of benefits as people work more (or get better paid jobs) acts as an effective tax on additional work. In many countries for many benefits such tax will easily exceed a 100% rate: earning 100 Euros a month more does not pay since 110 Euros are taken away from you as a result (20 through income tax and 90 through lost benefits). If basic income replaces all means-tested benefits, such horrid implicit tax is removed and you will increase your motivation to work since you’ll get to keep at least some of your earned income (sans income tax, naturally). So who will work more under basic income? People who are currently welfare recipients just around the level where it is being removed.

Who will work less under basic income? In effect, everybody else, i.e. everyone who is not a welfare-recipient-just-around-the-level-where-it-is-being-removed. Say your optimal mix of work hours and income is 176 hours a month for 2000 Euros. Now you get a thousand Euros for “free”. (Let’s assume, for simplicity, that such money is “created” out of thin air, by the government increasing its debt; a reasonably safe assumption in the European context). That means you are getting 3000 Euros for 176 hours of work, but you used to be happy with only 2000 Euros for those hours. You will want to enjoy some of the windfall in the form of free time, so you’ll converge to some happy middle, say work only 150 hours for grand total of 1000+1704=2700 Euros, at the same wage rate. Or you’ll take an “easier” job (where you can shirk more easily) for a lower wage. Either way, you’ll work less under basic income.

It is quite paradoxical that today the idea of basic income is associated with European socialists and communists. A form of the idea has always appealed to people distrusting state bureaucracies who saw in it a substitute for the administrative quagmire of checking on people’s private lives to seek out those truly needy – and then punishing them if they get better. Indeed, one of the greatest proponents of the idea of some basic income was none other than Milton Friedman who called it “negative income tax”.

Under his scheme, anyone earning more than what we may call “basic income” would be taxed (proportionally, i.e. with a flat-rate tax), those earning just the basic income would owe no tax, and those earning less than basic income would automatically receive a portion of their shortfall from the government, no further questions asked. (This portion should be less than 100% in order to still incentivise taking up some extra work when opportunity arises, but in principle can be very close to the 100%, fully-fledged basic income scheme.)
The crucial difference between Friedman-style basic income and current proposals has to be in the level. While Friedman (and others) were talking relatively low levels of support, both affordable and not disincentivising, current propositions (and not just the Swiss one) are well into the middle income territory. And that is their problem. As previous section has shown, for incomes above current welfare eligibilities, the programme will mean people will work less – and thus less general wealth will be generated to finance the programme. The programme can only work if the amount stays close to those on whom it can have a positive effect, removing the punishment for initiative that current European means-testing welfare systems provide.

In the European Union, step-wise adoption of basic income by individual states is completely unthinkable, it would automatically be torn to pieces by a wave of immigration from other parts of the union. This danger was appreciated already by F.A. Hayek when he was considering in 1979 “The Political Order of a Free People”:

“To confine to the citizens of particular countries provisions for a minimum standard higher than that universally applied makes it a privilege and necessitates certain limitations on the free movement of men across frontiers… we must face the fact that we here encounter a limit to the universal application of those liberal principles of policy which the existing facts of the present world make unavoidable.” 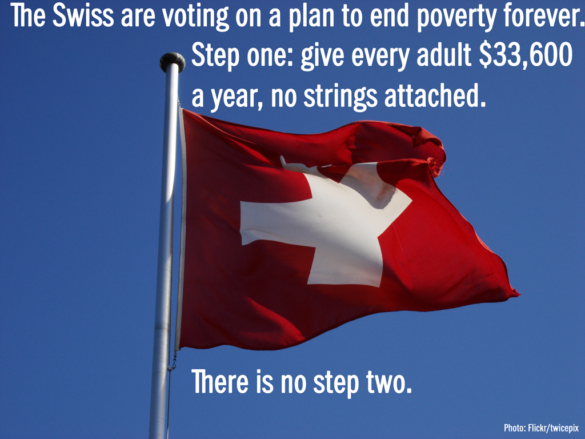 Woes of Wolf of Wallstreet