Can governments really save money by creating disasters abroad?

A new study from a German economics institute claims that the German state has already made €100bn from the Greek crisis as lenders flee from Greece into the safe haven of German government bonds, reducing their interest rate and saving the German government money on debt interest payments. Since German taxpayer’s exposure in Greece allegedly stands at no more than €90bn, the study concludes that even without Greek repayment of a single eurocent, Germany has already made at least €100bn – €90bn = €10bn profit out of the Greek crisis. Media quickly pointed to the implied injustice of EU’s Greek policy, generally still portrayed as “German” in design..

If this were true, it would have rather horrific policy implications. Governments could finance their disastrously increased spending by “creating” or supporting even greater disasters abroad, hoping that they would suddenly appear in a comparatively better light, appreciated by investors.

Fortunately, closer scrutiny of the study reveals that we can keep a cool head. Foreign disasters do not generally pay.

What the study calculates

The authors trace out “bad news events” in Greece (such as increased uncertainty about Greek government policy stance) between October 2014 and July 2015 and measure how these events affected the yield on German “bunds”. Overall the Greek bad news are said to have led to a decline of ten-year bund yields of more than 1.5 percentage points as investors executed a “flight to safety”. 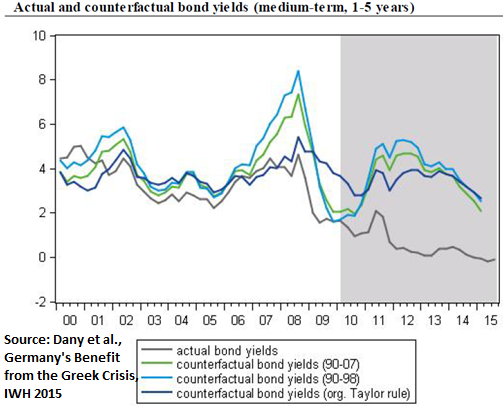 They then calculate how large the yields would have been between 2010 and 2015 under two scenarios –
1) if they had just continued at pre-2007 levels (green and light blue lines), or

2) if central bank’s interest policy had reacted to the dynamic of inflation and output, following a “Taylor rule” (dark blue line). If Germany in recent couple of years had to issue new bunds at the calculated higher interest rates than the actual ones (grey line), it would have cost her the extra €100bn, say the authors..

Why we don’t have to fear

Yet, there are some serious problems, both with the study’s estimation method and with its underlying view of the world.

1) Identifying the cause. The authors claim that Germany has made money specifically from Greece. It is true that capital flight from Greece to Germany “for safety” can realistically be pinpointed to the shaded area used by the authors for their calculation. However, the calculated theoretical and real interest rates start to diverge already around the start of the financial turmoil in 2007. Those had probably a lot more to do with American rather than Greek risks. The point is, if there are more agents causing the stir (as there clearly have been), it is not entirely kosher to suggest that Germany has been making money on Greece. On general uncertainty – yes. 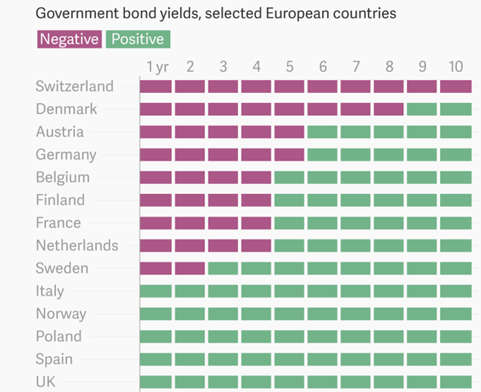 2) There are many safe havens other than the Bunds. Just as there are many sources of bad weather, there are also many safe harbours: not just some other governments’ bonds (as indicated by their even lower interest rates indicated by the chart) but also corporate bonds (some of which have even been earning negative interest as well). As a result, the desirability of German bunds (and the drop in their yields) is not determined only by Greece (even if it were the only source of turmoil), but also by relative desirabilities of other safe havens. So once again it is difficult to claim that Greece has lowered German yields when the behaviour of other safe havens has also contributed.

3) “Bad news” is the default for Greece. Although we have just shown there are more sources of turmoil and safe targets than to make the simplification “Greece caused Germany” credible, let’s go along with it. Let’s assume there is only the dangerous Greece and the safe Germany. Authors assume that the “pre-2007” Bund yields represent their “normal” relationship, against which the current “flight to Germany” can be calculated. 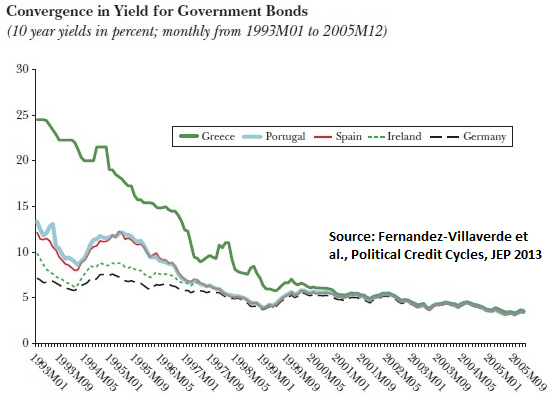 What if, however, the “flight from Greece” is the norm, and the period before 2007 represented an aberration when investors fled to Greece, pursuing the mirage of a Euro-disciplined Greece? Indeed, Greek instability traditionally used to fetch high levels of interest (above 20%), prior to the “Euro announcement” in early 1990s. Thereupon it enjoyed substantial influx as capital flew “away from Germany”, converging Greek yields down to German levels. Then it would be more fitting to say that on the contrary, “Germany paid to Greece through higher-than-otherwise German debt interest before 2007”. Perhaps it was that flight to Greece that should be considered unnatural, as is being confirmed now by rule-breaking bailouts by the EU..

4) German government does make money on Greece, but through the Euro, not the bund yields. The traditionally lower productivity growth in Greece used to be “taken care of” by changes in the Drachma-DM exchange rate. Now that the two are bound together through a single currency (and because relative productivities haven’t changed), Greek Euros make German Euros artificially cheap because of stickiness of Greek prices. This implicit undervaluation helps German exports (and harms Greek ones) very much since otherwise a strengthening DM would dampen them. Thus Greece (through its drag on the Euro) increases German economic activity and thus also the German tax revenue.

5) Policy design relying on financial markets is usually a bad idea. Even if the authors’ analysis were true, it cannot be a good guide for policy, even if we forget the “moral” side of stoking trouble abroad. Financial markets have an irreplaceable role in disciplining populist governments. But relying on them to flee to our bond market from foreign troubles could not work even in theory: they are good at learning and they will have priced in any such attempted policy long before politicians could realise.

There are many ways in which the Greek-German debt relationship can be analysed, but this particular one does not seem to be all that fruitful. Money can be made on the market, but markets are bad at handling government-created crises.