The relationship between populism and market economy is problematic. Despite some important exceptions (e.g. President Donald Trump), populist parties (and candidates) quite often place themselves much closer to the pro-State extreme than to the pro-Market one. It is often argued that populist leaders promote the interest of common citizens against the elites; pander to people’s fear and enthusiasm; and promote policies regardless of the consequences for the country. This latter point nicely illustrates the tension between sound market-based policies and the (economic) recklessness of several economic policies proposed by populist leaders in search of easy consensus acquired through redistribution, oblivious to the consequences in terms of inflation, public debt or growth. In other words, one could expect that when populist parties are in power, they move against the market.

From a theoretical point of view, however, the relationship between populist parties and the market economy could also run in the opposite direction. Countries characterized by strong pro-market ideas could be a tough nut to crack for a populist party. The reason is that in such countries citizens, voters and elites alike could be particularly “opposed” to the populists’ economic messages: they experience the advantages of a pro-market environment — stronger economy growth, efficient protection of property rights, limited role of the public sector — in their daily life, and don’t want to lose what they have.

In order to investigate in depth this aspect of the connection between populism and economy, I made use of two different datasets. I used the “Global Populism Database” recently developed by The Guardian. It measures the populist discourse of presidents and prime ministers from 40 countries (both democratic and non-democratic ones) around the globe between 2000 and 2018. Data points consists of a single, average score for each term of the executive. The highest the score of POPULISM RHETORIC, the more a government appears to use a language featuring populist messages and rhetoric. I focus here on the most recent presidents and prime ministers, who came to power since 2012 (e.g., President Donald Trump in 2016 for the United States; Prime Ministers Theresa May in 2017 for UK or Giuseppe Conte in 2018 for Italy; and so on). Figure 1 illustrates the distribution of POPULISM RHETORIC across countries.

Furthermore, I selected the 2012 Index of Economic Freedom developed by Heritage Foundation and Wall Street Journal to measure the degree of economic freedom in the world. The highest the score of the index, the more a country enjoys economic freedom. Figure 2 gives a visual representation across countries.

As a result of my selection, I can compare the degree of economic freedom in a given country in 2012 with the degree of populist rhetoric employed by the government (either the president or the prime minister) in that same country following that year. According to the argument advanced above, I should expect a negative relationship between the two scores (POPULIST RHETORIC and ECONOMIC FREEDOM).

Figure 3 (left panel) confirms our expectation: the higher (lower) the index of economic freedom in 2012, the less (more) friendly the country appears to be towards populist messages and rhetoric in the following years. Note that this negative correlation holds also when focusing on subsets of countries. For instance, this is true when one considers democracies and, therefore, ignores countries such as Venezuela, well known for the low level of economic freedom and the extremely high level of populist rhetoric of its government. This is of course reassuring in terms of robustness. 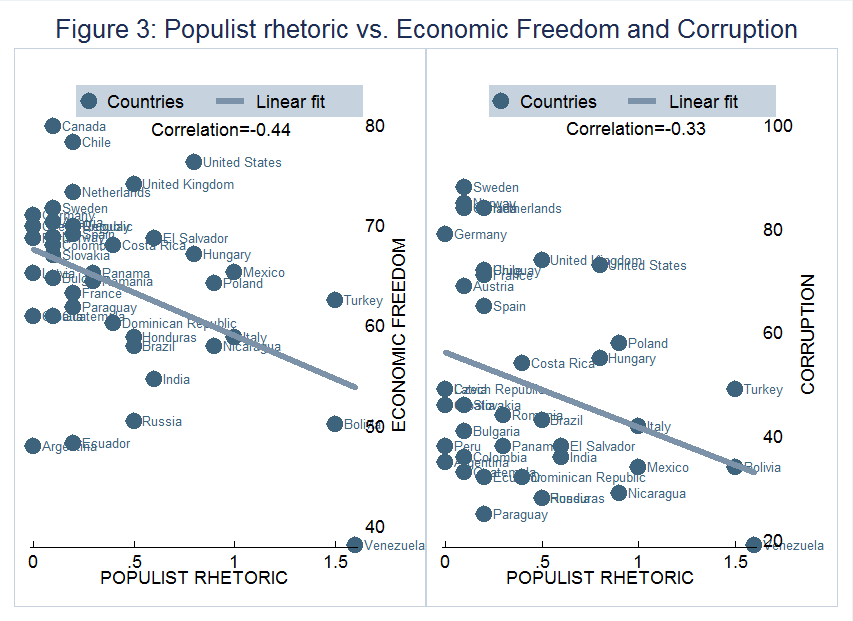 In a nutshell, although the popular press (and not only there…) links so-called neoliberal policies to populism, the results reported above appears to suggest a possibly different narrative: more (not less) pro-market policies could be the best answer against the diffusion of populist messages and rhetoric in a given country. The (sad) paradox is, of course, that neoliberalism has never been as unpopular among parties (and the public) than it is today. 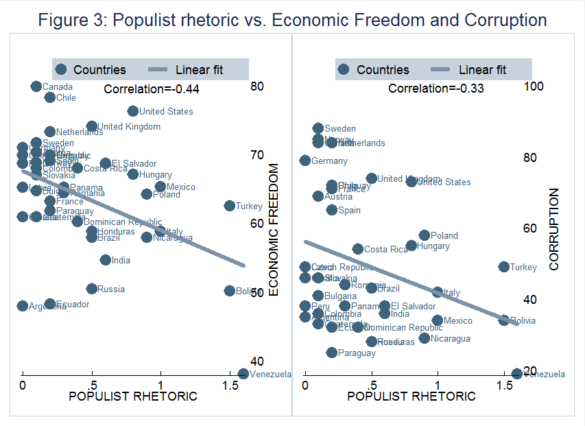