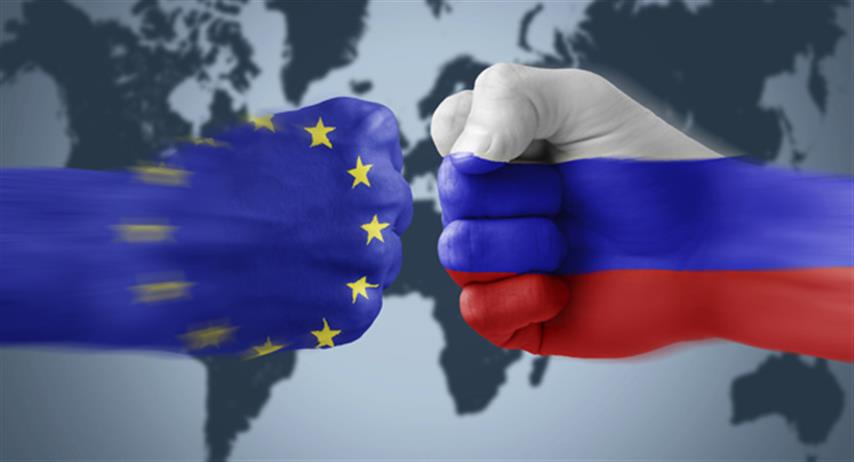 After many Occidental countries imposed sanctions on some Russian businesses, Russia has retaliated by restrictions on some Occidental ones. Trade wars rarely work. However, a new fiscal phenomenon has appeared: affected EU companies seek compensation from the state for loss of markets. Should they get it?

The “West” (mostly EU and USA) does not want to engage militarily in the Ukraine, so it has at least tried to put pressure on the Russian president through selective economic sanctions. Russia is now responding with a selective embargo.

Absence of a mutually beneficial trade was one of the most salient features of the Cold War. There was hardly any trade between the two belligerents; the East was only willing to sell to the West that which would not “help” the West, and only in order to get the hard currency to buy things it could not produce, such as advanced medical equipment. Now that trade is selective again, Cold War comes to life again. 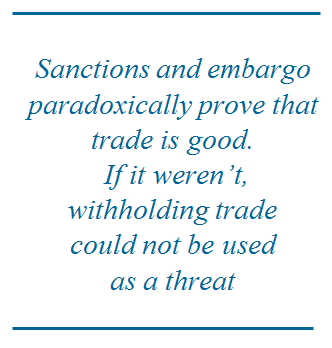 Though different in nature, they paradoxically prove that trade is good. If it weren’t, withholding trade could not be used as a threat. QED.

Per se, the trade embargo is unlikely to have a major fiscal impact on European economies. Prices of food and produce are expected to fall in Europe as a result (due to increased quantity from unsold export) and therefore VAT receipts may be slightly lower. The cost of government borrowing may rise in countries that export a lot of agricultural output to Russia and consequently their economic prospects worsen – there is already a talk that Finland, one of the last EU countries with an AAA rating (as we described here), may lose it soon.

But the elephant in the room are the growing claims for compensation for the “loss of markets”. These take place on two levels.
• Individual companies claim money from their governments, arguing it was their foreign policy that deprived them of business.
• Individual countries claim money from the EU, arguing it was the EU coordination that forced them into imposing sanctions on Russia which led to the Russian embargo.

Interestingly, nobody seems to have yet filed a claim against the Russian government for closing the market. And yet while the Russian action was a direct cause of the loss of business sale, the EU sanctions are only claimed to have led to the Russian embargo. Who knows if it would not have happened anyway?

Nevertheless, calls for compensation for “lost markets” now proliferate in virtually all European countries, not just the most connected ones such as Finland, Latvia, Lithuania or Poland where the embargo started.

The case of Estonia and compensations is especially interesting. Only earlier this year, more than 2 decades after gaining independence, did it finalize border treaty with Russia and gave up on its demands for – yes, compensation – for years of Soviet rule, by claiming a chunk of Siberia.

Can producers demand compensation whenever they feel harmed by their government’s foreign policy?

Loss of a market is an unfortunate thing, but it is a feature of our open world. Just because we are no longer (generally) eaten by lions when we go about our daily lives, it does not mean that all risks have gone away. Things happen, the world around us is changing, and we need to be able to find out what works and what doesn’t. 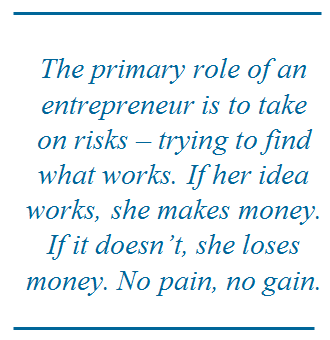 That’s what entrepreneurs do. The primary role of an entrepreneur is to take on risks – trying to find what works. If her idea works, she makes money. If it doesn’t, she loses money. The average between those two instances (over some time) is her reward for taking the risk and – crucially – for finding out. No pain, no gain. We all benefit from such information as we don’t have to repeat the evolutionary dead-end.

The potential loss of money is at least as important as the profit. If we “compensate” the entrepreneurial loss back to zero, we’ll not learn. 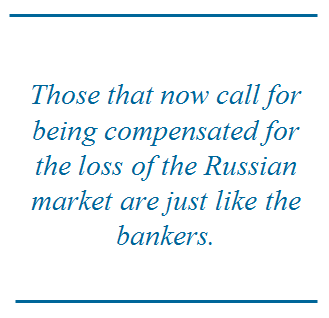 Consider the banks, for example. When things were working out, banks got their reward. When they didn’t – governments bailed them out. Natural caution has been killed, and is now having to be artificially recreated through complicated Euro- banking rules. Those that now call for being compensated for the loss of the Russian market are just like the bankers.

Of course it matters whether the market has been lost naturally because a better competitor has appeared, or whether it was killed off by government dictate. But even a dictate does not create a natural right for compensation.

From the point of view of an entrepreneur, such dictates of foreign governments closing their markets determine a “country risk”. Businesspeople don’t even have to be global political experts to quantify such risk: There are various rankings of countries’ stability available on the market that can guide their decision making. After all, it was indeed the foreign government that prevented them from trading, not their own.

Of course, those entrepreneurs who built the French warships for Russia and who may now be precluded from making the deal by the French government are in a different situation. But the market for warships is one already fraught with government risks from all sides, so they must be used to it.
What if, however, it is indeed the case that the entrepreneurs’ own governments may have precipitated the foreign government’s embargo?

The advantage of a “country risk” index is that it allows the entrepreneur to collapse all this history into “one manageable package”. If you still go in and get burned – caveat venditor, seller beware. 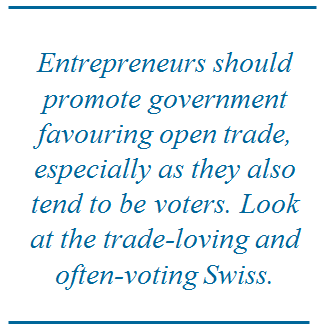 Secondly, a good government will naturally always seek to promote open trading. Entrepreneurs should promote such government, especially as they also tend to be voters. Look at the trade-loving and often-voting Swiss: Though they are helping out the EU in implementing EU sanctions, Switzerland has not imposed their own sanctions on Russia and therefore has not lost access to its market. Estonia’s president has even attacked Switzerland for not engaging in the trade war (and no doubt will seek a “compensation”)!

When will they ever learn?

It is still possible, though, that the country risk has been grossly underestimated – perhaps even rationally: One may expect modern enlightened governments of 21st century to learn from history that trade wars do not work. Gary Hufbauer considered with his colleagues 174 historic cases of trade wars and found only about a third of them successfully achieving their political goal. When the eminent political scientist Robert Pape examined their evidence, he concluded that in fact only 4% of those trade wars were actually successful.

So governments act irrationally. Who knew?