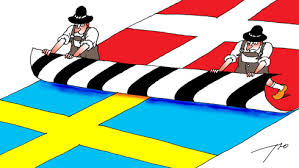 It is not forbidden to former socialist countries to reduce the weight of the state and drastically reduce taxes, especially on businesses. This was done in Sweden and Denmark, where unemployment is lower than in France .

They were symbols of welfare State in the 1970’s and 1980’s. Yet Nordic countries became models for achieving real State reforms in the 1990’s. Today, at the beginning of this decade, we can give examples for successful and dramatic tax cuts.

Sweden first. As we know, Sweden has privatized everything, drastically decreased or eliminated housing subsidies and other public subsidies, and introduced “vouchers” in the school system. Similarly, health is open to the private sector with insurance companies competing. Last year, the center-right government led by Fredrik Reinfeld decreased the rate of corporate tax from 26.3 % to 22 % (as a reminder, France rate reached 37 %). Parts of the income tax steadily declined since 2006, exceeding 4 billion euros concerning the active population as well as pensioners. A new series of 1.7 billion euros decreases are planned for 2014.

Sweden is not alone. Thus, Denmark, European champion of compulsory contributions, understood that it is not very good for the economy… On his election in 2011, Prime Minister Helle Thorning-Schmidt has promised to “tax the rich”. Three years later, it is rather the opposite was done. Early retirement were decreased while increasing the retirement age. The unemployment benefits were cut (the length was also reduced from 4 to 2 years maximum). Taxation has also decreased. The richest are not taxed more, on the contrary they were given the opportunity to invest their money in companies or foundations. The rate of corporation tax will go from 25 % to 22% by 2016. The unemployment rate in Denmark is 6.7 % of the labor force, one of the lowest in Europe .

Sweden and Denmark, two countries where the State could bring salvation finally understood they had to get rid of it to save their economy.