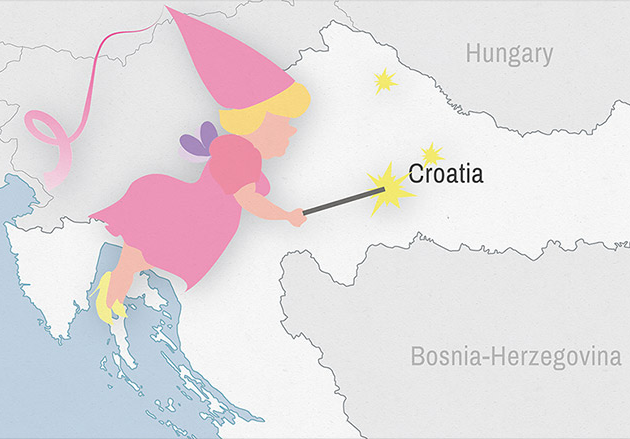 The poorest poor in Croatia are having their debts wiped out by the government. The motivation may be noble, but the apportioning of the costs is despicable. Once again, government’s power and reach grows, yet it keeps this fact under the carpet. Who’s next?

This article discusses whether such policy is good in principle and in the specific Croatian form.

There are two effects of cancelling a debt: on the creditor and on the debtor.

Effects on the creditor: Debt “cancellation” is a misnomer, the debt cannot just vanish in a thin air. Somebody will have to “pay” the debt instead of the debtor, usually the creditor or the tax-payer. As long as the debt was entered into under free will by both parties, the contract should be honoured and promises kept. However, a proper debt contract should involve at least some pooling of unforeseen risks. A contract that forces the debtor to repay under each and every state of the world that may materialize is a bad (and unfair?) contract. The creditor should bear some risk that the debtor is not going to (be able to) pay back (in full). After all, the interest (s)he is getting is a reward for both the time and the risk involved. In short, debt contracts should not be cancelled (though they may be renegotiated, like any contract), but debt itself may be cancelled, as per conditions stipulated in the original contract.

Effects on the debtor: The usual rationale given for cancelling a debt is to release the debtor from a spiral which never realistically allows him to repay it. Chasing debt repayments with further debts is not a sustainable policy. Of course it matters what caused such situation, but if the circumstances were generally outside of the creditor’s influence, an argument for debt cancellation can be made even on efficiency grounds: bringing back the indebted party into normal economic activity will end up generating more overall wealth (for everyone else’s enjoyment) than keeping him forever under. After all, both companies as well as individuals can generally declare themselves “bankrupt” at some point. This must not be cheap or encouraged, but an option it should remain.

“Releasing the potential” is indeed the avowed rationale for the proposed policy by the Croatian government. Around 317,000 Croatians (about 7% of population) have their bank accounts blocked because of their debts to the banks, utilities or the government. Under the new policy (declared in early February), these debts will be “wiped” (and bank account access restored) to anyone who
• Makes less than 1250 kuna (€162) per month (or qualifies for welfare on other grounds)
• Owes more than 35,000 kuna (€4,500)
• Does not have any other substantial assets or savings.

This should affect around 60,000 people (about one fifth of those with blocked bank accounts) and wipe out about €272 million of debt, according to Reuters. (Please note that this sum is unlikely to be correct since it seems to have been arrived at by cross-multiplying 60,000 people by 35,000 kuna; most eligible debtors will presumably owe much more than the threshold 35,000, and all their debt is to be wiped.)

The details of the provisions will have the following effects on indebted Croatians:

• As a “stimulation package” for an economy in recession for the last 6 years, this may work; somewhat. The “aid” is targeted at the very poorest members of the society who tend to have a very high “propensity to consume”, i.e. little of an extra kuna earned is saved as nearly all is spent in the economy. Furthermore, legal (and taxable?) income-generating activity is now re-encouraged as the poor Croatians stop trying to be paid cash, outside the standard banking sector.

• Just like any other government programme with “sharply defined edges”, some disincentives are introduced. If you owe 34,999 kuna, you get nothing. If you make 1251 kuna, you get nothing. This unnecessarily encourages cheating (“Can I owe you 1 more kuna, please?”) and discourages earning (“Please, don’t pay me more, I want to get rid of my debt.”)

Unfortunately, the effects on creditors are much more nefarious.

At first blush one would assume that the government has decided to finance the scheme out of general government spending. This would naturally hurt all taxpayers somewhat; however, compared to the multitude of “silly” and even destructive government programmes, this one may not score that badly and perhaps even pay for itself over time, if the stimulus works. However, the money will not come out of government spending.

Instead, the Croatian government has “worked out a deal” with Croatian banks, telecom operators, local municipalities and utilities, that “they will absorb the debt”. They will simply cancel it, without any reimbursement. One can only imagine how the “negotiation” to work out the “deal” looked. But let’s consider the creditors in turn.

• Local authorities are effectively under the power of the central government; Croatia is no Switzerland with truly independent local government. Fair enough, the government can “dictate”, since any debt cancelled here will eventually show up in government’s books.

• Local utilities will generally fall into similar category. Although officially they usually stand as independent companies, they are almost always intrinsically interconnected with local government’s budget. Any losses thus incurred will eventually also show up in the government’s books.

• Banks and telecoms: All three major mobile phone operators in Croatia are private companies (run by German, Austrian and Swedish telecoms respectively). The dominant landline operator is also owned by Deutsche Telekom. The majority of banks are also private companies, although the government does hold some stake in smaller local ones. When a government takes money from a company, it is usually called a “tax”, not a “deal”. This deal was probably not very voluntary on their part, but they knew that the government could punish them with extra regulation. In the world of banking and telecoms, new regulation would be nothing new.

As a result, the “public good” of a slightly increased chance of economic recovery is being funded not by the beneficiaries (all members of the economy), but by a very small sub-section. Since the companies are mostly foreign-owned, it’s essentially the foreign shareholders who are forced to pay for the government’s popularity. Yes, popularity, the PM was not ashamed of self-congratulating proclamations: “This is the first time that any Croatian government tries to solve this difficult problem and we are proud of it”, he said.

Extorting money from those who are owed is a bad policy. But doing it all in a way that avoids the taxed sums actually appearing in official tax revenues is even dangerous. Government’s size and power has just grown in Croatia, yet no standard official statistics will have recorded it. That must not become a precedent.