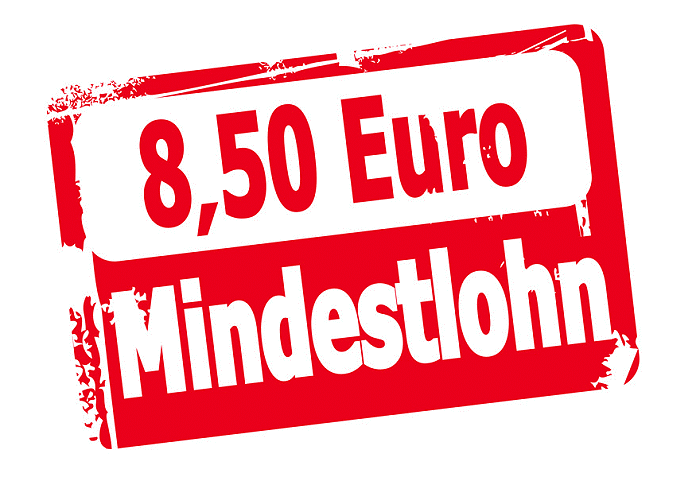 Germany’s minimum wage has been created at a pretty high level, higher than its equivalents in the UK or the US. Increasing the price and reducing the quantity of an economic activity it acts as a tax. A pretty unsocial one as it destroys jobs for the poor and punishes those who create them. That the poorer Eastern Germany should be hit the hardest is saddest of all.

Centralisation has advanced another leap over the summer. Germany has traditionally been one of prime examples of economic federalism not only in Europe, but also in the world. Its Länder may not have created such a jungle of state-only legal definitions and rules that characterise the USA kind of federalism, but many economic matters were still pretty non-central. This included the setting of wages in low-pay industries. They were usually negotiated at a tripartite round table of the government, employers (and their organisations) and employees (and their trade unions).

That changed at the beginning of July this year, as the conservative Chancellor Merkel made a significant concession to the social democrats (with whom she had established a “Grand Coalition”, something not unheard of in German politics). For the first time in its post war history, it will have a nation-wide minimum wage.

From 1st January 2015 the minimum wage will be at 8.50 euro, relatively high even by European standards. The government insists that no employment will be lost as a result. Economic research supports this prediction only weakly. There are a minority of studies that indeed find no or negligible effect of minimum wages on employment, although the majority of studies do find a negative effect.

This more pessimistic conclusion seems to be borne out also by some early observation of the German labour market. And that’s in spite of the fact that the minimum wage is still another quarter away, that there are provisions that enable collectively bargained wage tariffs to remain below the minimum for another two years, and that there are further exclusions from the minimum wage obligation for the young, trainees or long-term unemployed back on the labour market. German labour market is quite regulated and it takes time to reduce workforce, so companies do have to start acting early.

The company printing advertisements for the retail giant Kaufland, for example, will shed 55,000 jobs from November. Henceforth sales flyer delivery will be subcontracted out. This is a classic consequence of minimum wage legislation. Because of usual legal provisions, minimum wages apply much more to employees than to self-employed or agency workers. Even though the actual jobs continue more or less unchanged, with minimum wage legislation these jobs tend to be converted from employment contracts to the much less secure “temp” work or self-employment.

A similar switch may befall taxi drivers. Their lobbying group came out with a press release that since currently they receive wages of around 6.50/hr, and in some Eastern states even as low as 3.50/hr, they will not be able to cope with the coming high minimum wage and they will have to fire 200,000 employees. Even if they actually do that, however, it is unlikely to result in 200,000 fewer taxi-drivers in Germany. Because of other employment legislation, the job of a taxi driver is all over Europe also getting converted from an employment contract to a self-employed entrepreneur. And Uber (the taxi-mimicking mobile app) is not always to blame. The problem is that social security and health insurance taxes tend to be higher for employees than for the self-employed, as the latter enjoy “special treatment” to allegedly encourage entrepreneurship.

The actual impact of a minimum wage on employment will depend a lot, of course, on how high it is set. A mere comparison of hourly wage rates denominated in Euro across the EU would offer little insight. Taxation differs, costs of living differ, holiday time differs. And that’s just from the employee’s point of view, to account for willingness to work. For the employers it is even more difficult to tell whether they can “afford to pay higher wages”, as politicians like to say, because other costs and labour productivity differ perhaps even more across the EU.

What one could do, however, is to compare how close the minimum wage is to the median wage (with one half of workers being paid more and one half less). Obviously, the closer is the mandated minimum to the median, the more pronounced effect it is likely to have on the labour market, in terms of potential jobs lost. Such comparison for the new German minimum wage was done by researchers at Munich’s Center for Economic Studies. They ask: suppose we wanted to set the new German minimum wage at exactly that proportion of the median wage as exists in the UK or in the US. How high would we set it and how would it compare to the 8.50 set by the government? 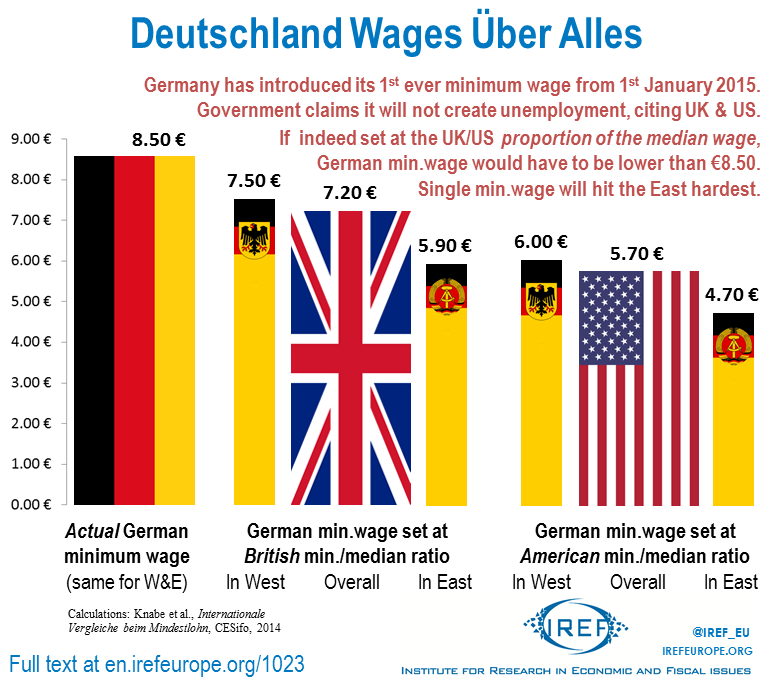 As the chart illustrates, if the German minimum wage were set proportionately to the UK labour market wage conditions, it would be about 1.30 euros lower. A US-style minimum wage would dictate a lower still rate for Germany; at 5.70 euros it would be only 2/3 of the actually legislated level. When the average rather than median wage is used as a point of reference, the equivalent German minimum wages are even lower, roughly by another 1 percentage point!

So not only is the minimum wage absolutely higher in Germany than at least in these two major competitors on global markets, it also makes “illegal” a larger chunk of a potential wage distribution of different jobs, being set much closer to the median. That’s why the German minimum wage is radical not only by being new, but especially by how high it is set.

There is one more sense in which it is still even more radical. Wages differ not only across jobs, but also across geography. Costs of living can differ greatly, and therefore two people working on the country’s minimum wage would face very different circumstances; one may not be able to make ends meet whilst for the other one it would mean a pretty comfortable life. That is why countries such as the USA adjust their minimum wage rates regionally; by state, sometimes even with special provisions for expensive cities.

Germany is still a somewhat bifurcated economy. Even after a quarter of a century, a typical Munich of Frankfurt resident could not live on what someone is earning in East-German Magdeburg, or perhaps even Berlin. That used to be reflected in the old system of local wage negotiations. Even Bundes-wide industries (like the Post Office, for example) negotiated different standard wages for the West and for the East. Such system is much more efficient because it uses local information about relative prices.

The new one nation-wide minimum wage, however, does not adjust to local conditions, and therefore is likely to negatively hit more the already struggling Eastern Bundesländer. The differences are actually quite substantial. When we redo the exercise of calculating a UK- or US-style minimum wage separately for the West and East, the West does not rise all that much above the pooled calculated average, but the East drops substantially, as can also be seen on the chart. If East Germany adopted a US-style minimum wage, for example, it would not be about 2/3 of the set level but closer to 1/2!

Minimum wage as a tax

Whatever the rate of a minimum wage, it always effectively acts as a tax on the low-paid jobs. Harvard’s economist Gregory Mankiw, for example, takes up this point in his New York Times article about Obama’s plans for increasing the American minimum wage. Lucidly he explains that a minimum wage is a tax which is paid by employers of low-productivity workers. It may appear as a silly form of tax because the government is not raising any money from it – but if increased wage for some workers results in them making smaller claims on the social security system, the government can “make” (save) some money. However, this needs to be offset potentially by the greater social security claims of those who will lose their jobs as a result! So it may still turn out to be a curious tax which raises no money for the government AND punishes employers for actually giving jobs (rather than welfare) to those low-income households that the government is presumably trying to help all along!

That’s a pretty raw deal. Of course, being paid peanuts is also a raw deal, but what most commentators forget that the typical “burger flipping” minimum wage jobs are held by people only for a brief period, before they “sort out their life” (having gone through personal troubles, for example) and move on. The turnover of labour force is enormous, compared to other jobs. And 12 people being “sentenced” to minimum wage for a month does probably sound less drastic than 1 person being stuck there for the whole year.

The German experiment therefore is a very bold one, with potentially serious consequences. Fortunately, a 9-strong committee will regularly review the level at which it is set. Revisions can go in either direction, so at least theoretical hope still lives for a reduction in this tax burden on German economy which punishes the poorer East the hardest. 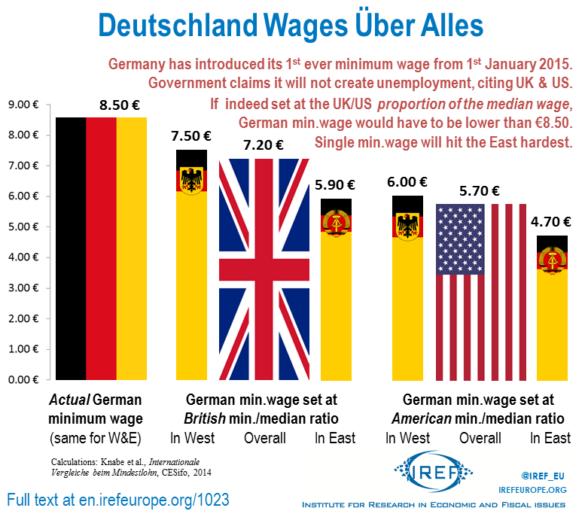