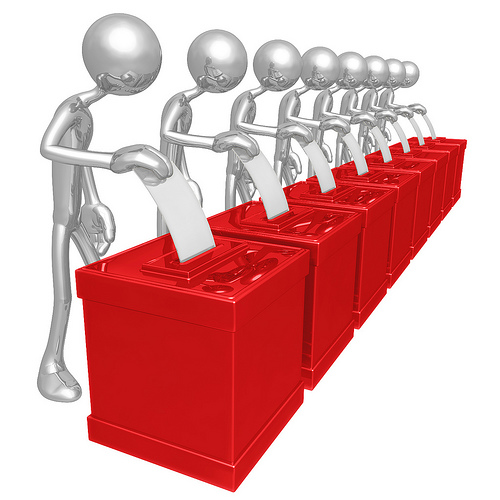 How economics – and the fiscal cycle – affect voter turnout is a richly studied question. But what about the other way? Can turnout – how many or few voters turn up to vote – affect the fiscal situation in the following period? IREF investigates and finds that people simply going and voting can be good for fiscal freedom. At least a little.

There is a lot of academic literature (especially in political sciences) on what determines whether many or few people will turn out at an election. Many factors generally play a role – the amount of campaigning, the weather, the day of the week, the economic cycle, the length of incumbency or even the amount of hair donned by the main candidates.

At the latest European election, some countries experienced increased, some decreased turnout compared to the last election 5 years ago.

However, we have also said that economic cycle can also influence turnout, and it is not difficult to imagine that voting left or right may also be influenced by the cycle. Therefore, at best we have a triangle with corners of turnout – cycle – fiscal policy, all of which can mutually determine each other, often in both directions. Even if we see a specific turnout leading to specific fiscal policy, it could in fact be the economic cycle acting and causing both of them.

Fiscal turnout: WHO gets in

To cut the Gordian triangle, economists use experiments created by fate. Suppose we arbitrarily reduce the cost of turnout to one half of otherwise similar voters. If both groups continue to experience the same economic cycle, but the one “treated” half produces a different turnout and then different fiscal policy, we will have distilled the “pure” (perhaps even “causal”) effect of turnout on fiscal policy.

Such happy arrangement happened in the 1970s when one group of Bothnian Gulf voters (call them Swedes) suddenly synchronised their local elections with national ones (thus reducing the cost of voting in them), whilst the other half (called Finns) hasn’t changed anything. Studying the results, the Uppsala University economist Linuz Aggeborn has found that high turnout alone, cleaned of other effects, leads to more leftist candidates being elected in local elections and subsequently to both higher municipal taxes and larger local public spending. Of the total tax changes after the election system change, turnout changes are responsible for around 7%. This is perhaps not astronomical, but neither is it insignificant. On the expenditure side, one percentage point increase in turnout (say from 60% to 61%) increases the spending by local governments in Sweden by about 7 million USD (in 2005 prices). Relatively speaking the effect is much higher than in the case of tax rates. More than a quarter of all increased public spending between 1967-77 is attributable to changes in turnout.

Still, however, the study does not distil the purest effect of turnout alone. It could only measure the effect of turnout on fiscal policy through its influence on leftist or rightist parties getting elected. That may work for the homogenous regions around the Gulf of Bothnia but may be difficult to transfer to wider Europe. We would have to assume, for example, that in all countries the “devoted voters” who turn up rain or shine are on the same side of the spectrum and to the same degree. In most post-communist countries, for example, political scientists analyse the left wing as having more devoted voters (especially through the communist and post-communist parties), so bigger turnout may generally favour the right wing. Incumbents are also from different wings in different parts of Europe, so the “protest vote” (a strong factor in turnout) will sometimes be against, sometimes for parties calling for a bigger government.

It is clear that we need a purer analysis of how turnout affects fiscal policies, one which does not rely on whether turnout tends to favour left or right wing parties.

Fiscal Turnout: HOW they get in

The aforementioned diversity of European experiences means that it is next to impossible to test anything sensibly on a sample of all-European data. But we still need lots of data to get credible results. We could look at few elections across many years, but given how rare they are, we would have to go back many decades to get sufficient data – and that is problematic: are we really to assume that say, elections from early 20th century work in the same way as in in the early 21st?

So it is much more sensible to look only at a few recent years, but we need lots of different elections. In the EU are some 27 countries usable for such purpose, but 27 national elections are still far too few. In the EU there are about 80 thousand municipalities. That’s a good number. But there are still vast differences across the continent as to what is understood by a municipality – and what fiscal powers it can have. So there is again too much noise. If only there were a homogenous country with sufficiently many of them…

Well, thanks to the year 1789, there is one. France today contains nearly a half of all EU’s municipalities, all equal, governed by the same national law. A perfect natural laboratory for studying the effect that election turnout per se has on fiscal freedom.

Economists Raphael Godefroy and Emeric Henry analyze rigorously the effect of turnout rates on the size of local governments on two recent municipal elections in France. Fiscal policy is measured respectively as municipal revenue and spending. They use all sorts of other variables in their model in order to distill the effect of turnout. Of course, it is always difficult to measure causation in economics, but their clever use of so called “instrumental variables” means that they get probably as close to identifying causation (and not just correlation) as economists can get.

Before considering the mechanism how turnout alone can influence fiscal policy, let us review Godefroy and Henry’s evidence.

They find that a turnout increase of 1% results in a decrease of the size of government by about 1.5%, as measured by municipal revenues.

Municipalities get their money in three main ways: they can tax, borrow, or get subsidized by Paris. When the authors study more closely which revenues decrease the most, they find something very interesting for the contemporary debt-laden EU.. Much of the decrease in the size of government comes from less borrowing as well as smaller subsidies. That borrowing is capable of adjusting is very good news. In sclerotic European fiscal systems any decrease in tax revenue would just be matched by increased borrowing (as we see) and/or compensating grants (from the EU).

Having such detailed data also allows for a precise calculation of the effect of a single vote. By coming to vote or not (regardless of who you vote for), you are changing the overall turnout, and therefore we can calculate the effect that your turning up will have on subsequent (local) fiscal policy. Just by turning up to vote in French municipal elections, you will reduce the municipal budget by about 2.3 Euros per year. In total over the 6 years of the election term this is a bit less than (6×2.3) Euros because money in future is less valuable. With standard discount rates the “net present value” is roughly 10 Euros. That may not sound like a lot, but remember that there are only about 1600 people in a municipality (and less than a half of them vote) and it has limited scope compared to the central government. 10 Euros, regardless of how you actually vote, is actually reasonably significant under the circumstances.

Moving from revenues to fiscal spending, the effect of high turnout is quite similar. In a way it has to be, we have already said that decreased revenue is not much offset by increased borrowing. Just as we have identified different sources of revenue, we can look at different kinds of spending. Turnout has the highest the effect on spending on “investment in equipment” which falls by around 3% as a result of 1% increase in turnout.

Personnel expenditure often falls insignificantly This has two possible interpretations. Either the municipalities are already employing the smallest number of employees necessary to run the local government – or they are inflexible in firing them according to the collective wishes of the electorate. In all likelihood, even if they wanted to fire them, they cannot because of labour market regulations. Unlike people, roads and sewers do not enjoy the same employment protection rights.

Unlike in the Scandinavian study, there seems to be no link here between turnout and which wing actually wins the election. So how does turnout achieve this if not through tending to elect big or small government parties?

It turns out that although turnout does not seem to affect whether left or right wing parties get elected, it does affect the majority with which any given party gets elected. Specifically, increased turnout decreases the strength of the incumbent majority. In other words, when many people turn up, current office holders are less certain of their posts.

The authors speculate that in any fiscally hierarchical system, an incumbent can credibly promise better access to “grants from above” and tends to be generally the “bigger government” candidate. We already know from political science that almost universally across the globe, the incumbent (of whatever party) tends to have an advantage in any subsequent election. Without increased turnout, (s)he would get re-elected and the bigger grants from above would be forthcoming. If increased turnout reduces empirically his/her chance for re-election (or the strength of his/her majority) and therefore grants are going to be less than what they would be otherwise – and certainly less than in places that did not enjoy increased turnout. Weaker (or no) majority makes for a weaker (or no) ability to deliver the promise of big government.

Could this explain the general post-war European trend of ever-growing fiscal policies and falling turnout rates? Perhaps, although a detailed study would be needed for that. And it is unlikely to be the mechanism to explain the growing EU budget falling EU election turnouts, since the mechanism relies heavily on promises of grants from above (for which incumbency advantage does exist), and there are no grants to the EU from above (so far).

A more likely culprit is a combination of a ratchet effect to explain the growing fiscal policy (going down is always harder than going up), and an increased value of alternative uses of time of the electorate than to go voting. Either way, having ever more money and being elected by ever fewer voters cannot be good for the governing elites.