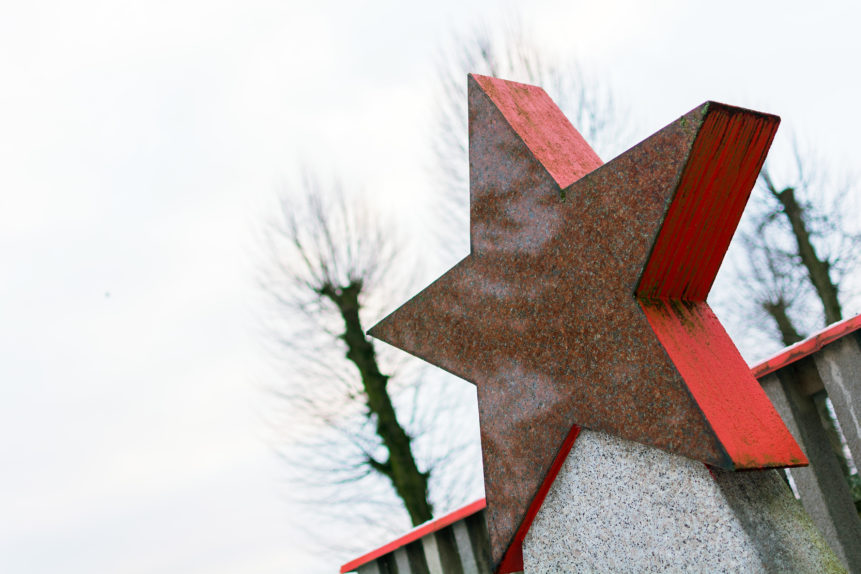 In 1989, revolutions began sweeping across Eastern Europe. Communism was counting down its final days and what would soon be the end of the Iron Curtain. Eastern European economies were on the verge of leaving socialism behind and welcoming a market economy. Thirty years later, public policies and political institutions of the former socialist economies do not equally support economic freedom, just as they do not observe the same level of international trade, foreign direct investment, and income. Some of these economies have become success stories of market liberalisation by way of decreasing barriers to international trade, lowering marginal tax rates, bringing about monetary stability, engaging in deregulation, and strengthening the legal system; others, in contrast, were less successful, finding it challenging to increase their levels of economic freedom.

The Fraser Institute’s Economic Freedom of the World (EFW) index provides a quantitative assessment of the degree of market liberalism in a country. Table 1 presents the levels of economic freedom in 26 former socialist economies between 1995 and 2016. In 2016, the most recent data available, the highest levels of economic freedom were in Georgia, Estonia, Lithuania, Romania, and Latvia, while the lowest levels were found in Ukraine, Belarus, Azerbaijan, Bosnia and Herzegovina, and Moldova. 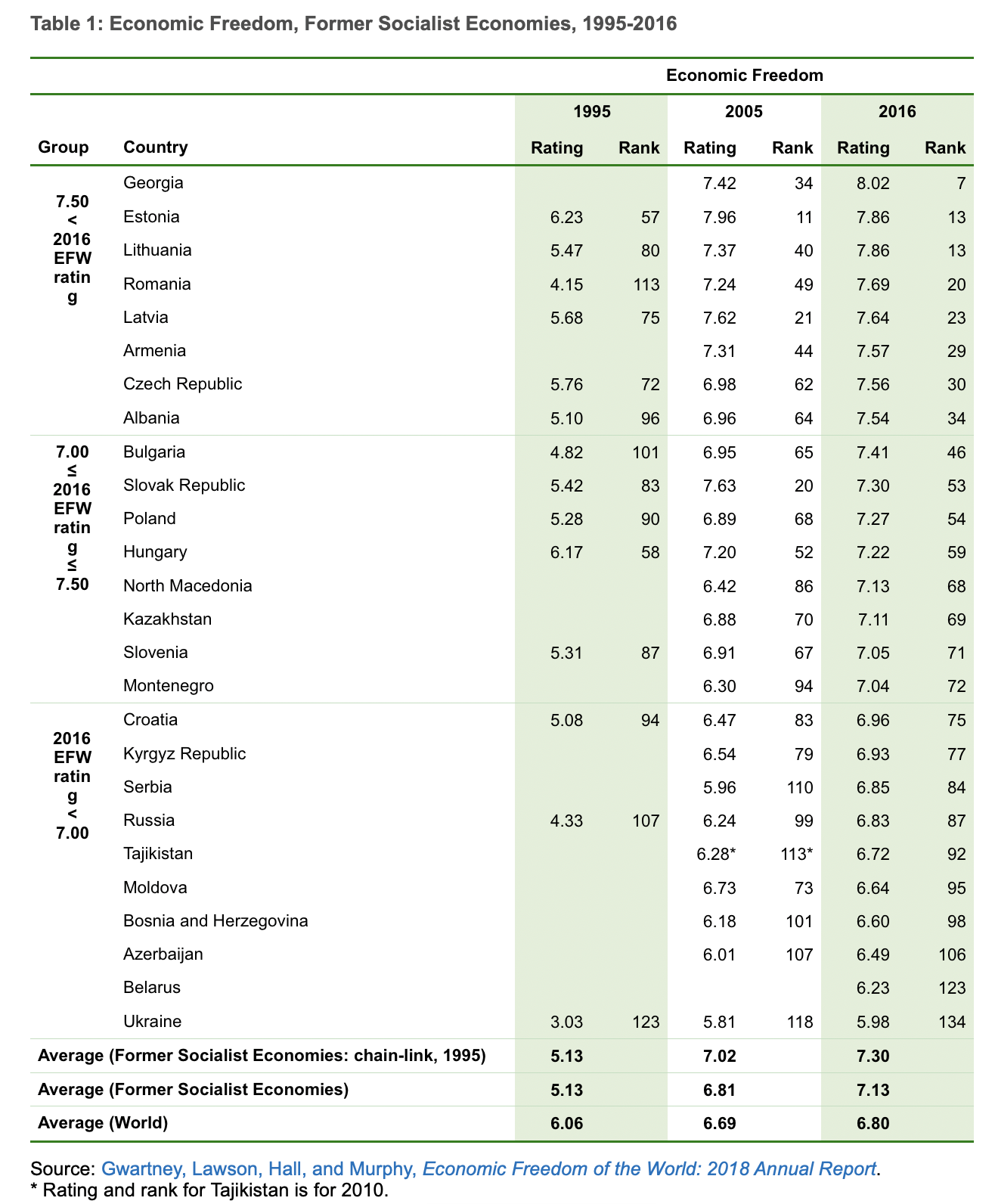 As the data shows, all of the former socialist economies have liberalised and strengthened their markets over the past two decades. Furthermore, economic liberalisation has spread across the former socialist region at a higher pace than in the rest of the world. In 1995, the average economic freedom rating for the former socialist economies was behind the world average by 0.93 points, while in 2005, it was ahead by 0.12 points and in 2016, by 0.33 points. The most significant improvement during the 1995-2016 period is observed in Romania, which improved its score by 3.54 points and climbed from the 113th to the 20th rank on the EFW index. By contrast, Slovakia, which was ranked only behind Estonia in the early years of transition, visibly decreased commitment to a market economy, dropping 33 ranks on the EFW index from 2005 to 2016.

Finally, as extensive empirical literature has revealed, economic freedom is positively associated with national income, economic growth, living standards, economic equality, and a variety of other desirable social and economic outcomes. Table 2 provides the results of four determinants of economic performance for the former socialist economies in the period 1995-2016: income growth, income per capita growth, foreign direct investment, and international trade. The average national income in the most economically free group increased by 4.40 percent annually, while growth of the average annual income of the other two groups was 3.25 and 3.76 percent, respectively. Importantly, as a group the former socialist economies grew noticeably faster (3.80 percent) in the period 1995-2016 than the OECD members (0.97 percent) as well as all countries of the world (0.83 percent). Moreover, all groups of former socialist countries have done well in terms of net foreign direct investment. Similar observations apply to international trade. 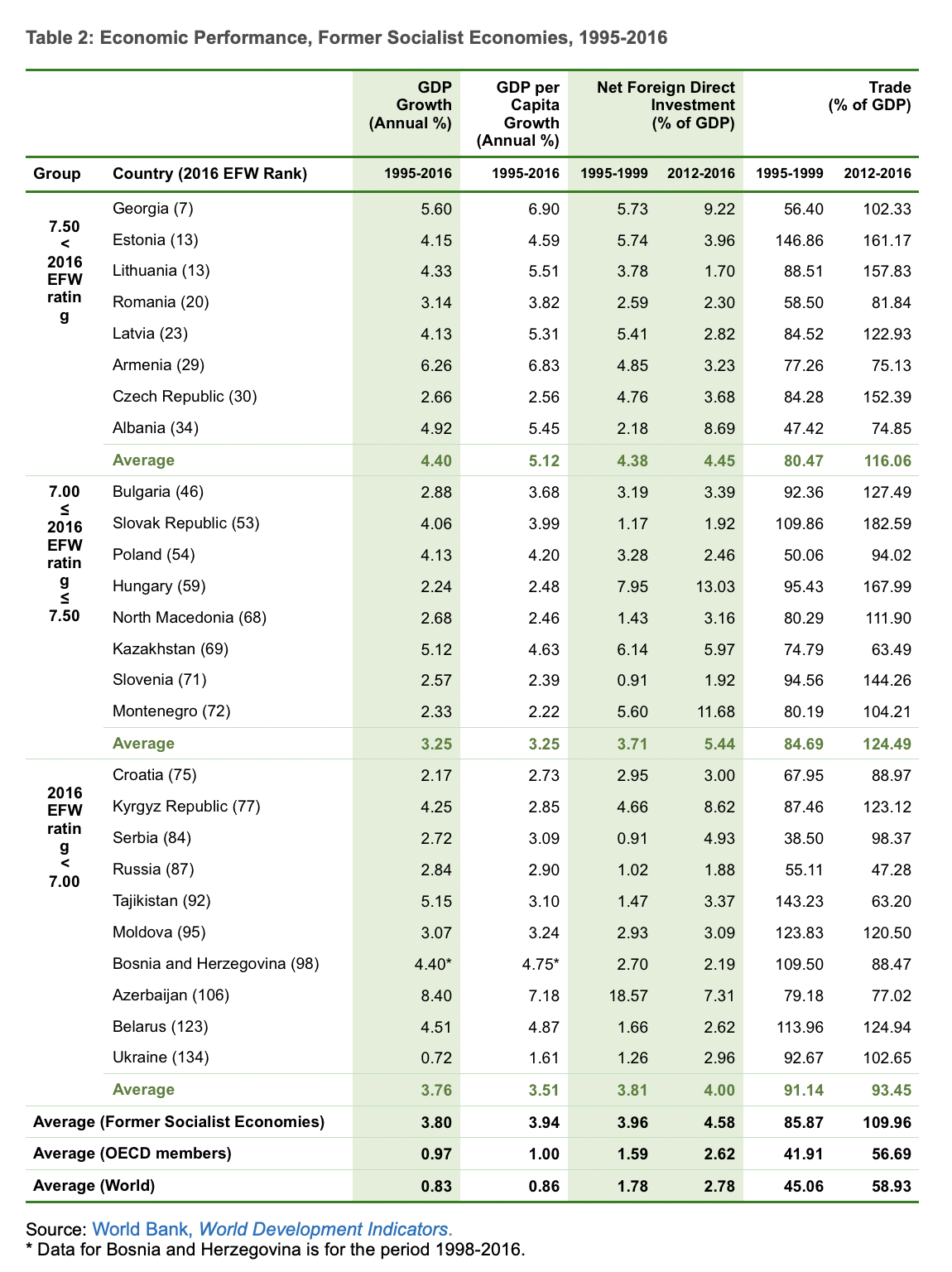 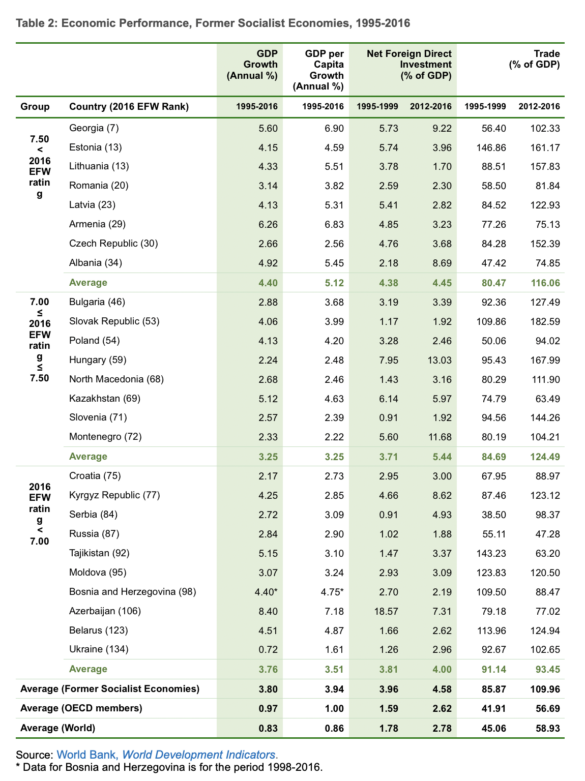