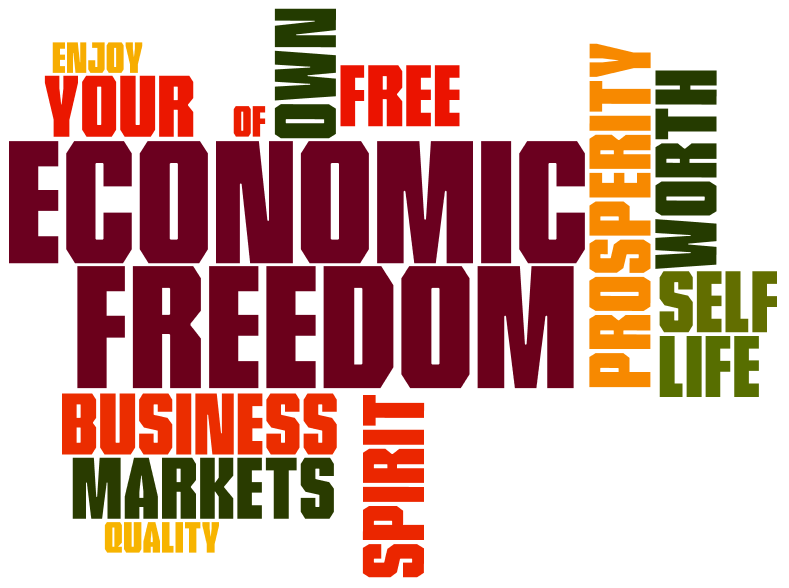 9 EU countries have not adopted the Euro, 19 have. Both groups include similar proportions of countries with high, medium and low levels of economic freedom. However, IREF’s investigation of what has been happening to economic freedom in the two groups reveals significant differences. While non-Euro countres moved towards more fiscally related freedom, in Eurozone it stagnated or declined.

On Tuesday, the Heritage Foundation in partnership with the Wall Street Journal published its annual Index of Economic Freedom. It tries to quantify, as much as one can, for every country on the planet, how free are citizens from governments dictating them what to do with the fruits of their labour and capital (including property). To create a composite index it combines 10 individual measures filed under four broad categories:

Why should we care about economic freedom? There is a strong link between economic freedom and growth in general prosperity and well-being. No index is perfect, of course, but the great advantage of this index is that it applies the same method to assessment of different countries, and is today able to provide this consistent data over a period of more than 20 years. Therefore, we can see not only how much economic freedom there is in a country now, but also whether it is increasing or decreasing over time.

The 2015 level of economic freedom (measured on a scale from 0 to 100) of EU countries is shown on the following graph for countries who have and have not adopted the Euro. 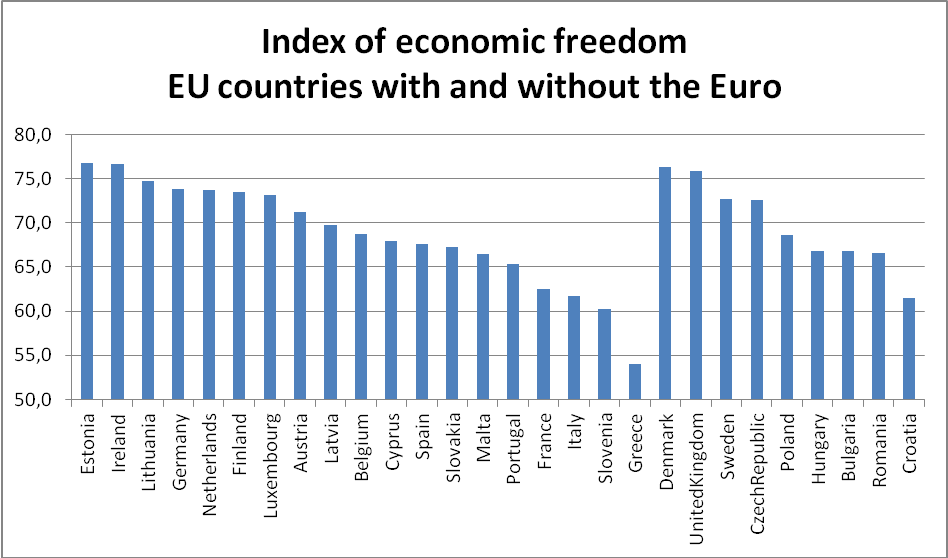 Economic freedom is similarly distributed in the two groups; both include high, medium and relatively low levels of economic freedom and magnitudes are similar Averages are almost identical – 68.7 vs. 69.7.

However, closer scrutiny of how economic freedom has changed over the past year since the 2014 index reveals important differences between the two groups.

Have EU countries over the past year climbed up or down in the world table of economic freedom? 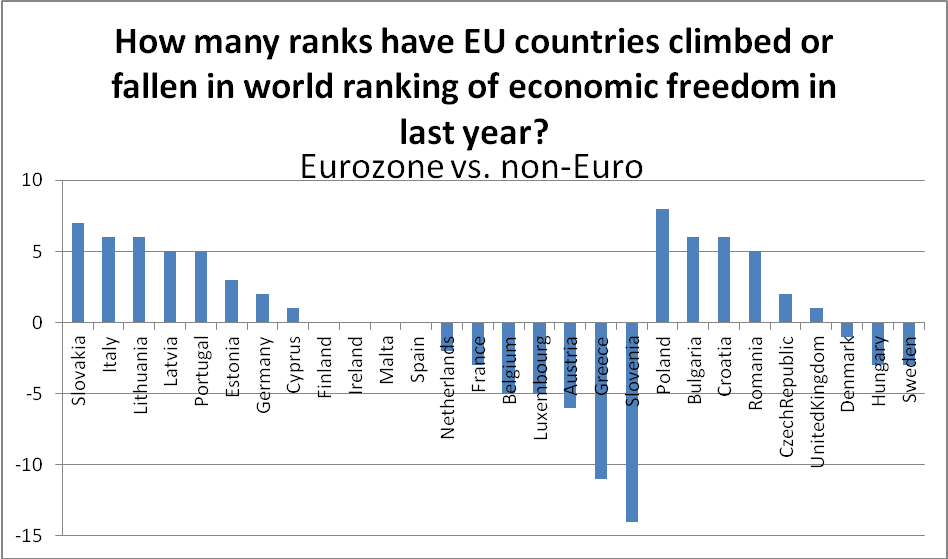 Eurozone countries have demonstrated more modest climbs and more pronounced falls in the ranking than non-Euro countries. Although Slovakia climbed up 7 ranks, its near-namesake Slovenia fell full 14 ranks. Among Euro-outsiders, Poland climbed up 8 ranks and falls, if any, were modest (Hungary and Sweden fell by 3 ranks). The averages tell a similar story. Eurozone countries fell one rank on average while non-Euro countries climbed two. Not having the Euro as currency seems to have meant greater success in the World-Wide economic freedom league over the past year.

This sub-index measures the country’s tax rates in a mutually comparable way, with attention on income and corporate taxes and the total fiscal burden. This freedom is then measured on a standard 0-100 scale. How has the fiscal freedom index changed in EU countries over the past year? 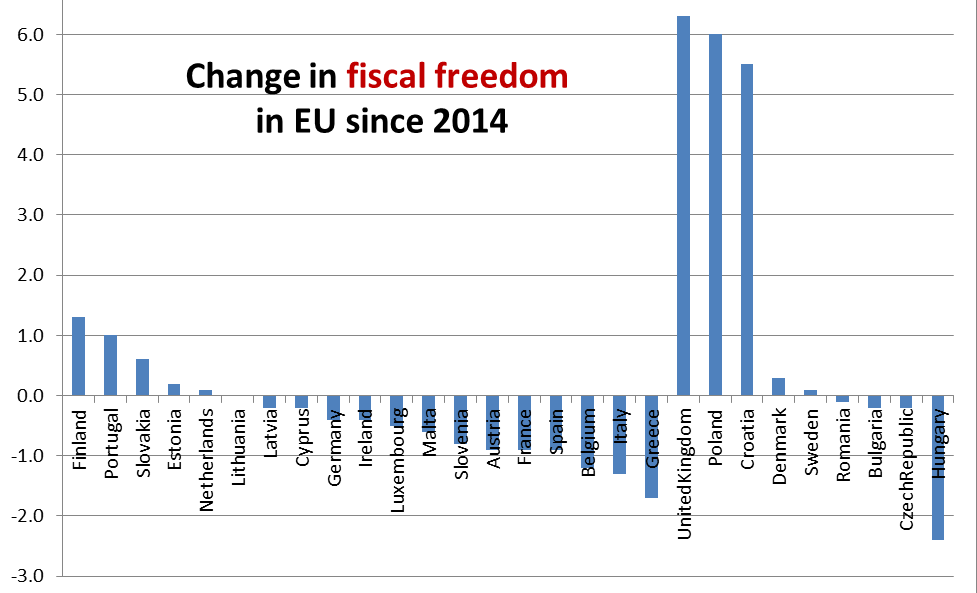 For most countries, the change was relatively modest, whether in the direction towards more or less freedom. The graph is, of course, completely dominated by what happened to only three countries. As such it might not seem like a fair comparison, being dominated by few big-change “outliers”. However, it is significant that all three have been in the direction of greater fiscal freedom, and especially that all three are in the non-Euro camp. 3 out of 9! That more than offsets the fact that the fiscal freedom worst performer Hungary (about whose tax regime we have written here) just outstrips even the basketcase that is Greece. The average Eurozone country lost 0.4 index points on fiscal freedom, the average non-Euro one gained 1.7 points. Once again, fiscal freedom gains have been larger in the non-Euro countries.

We are witnessing all around us that the amount of taxes collected has lost its ability to constrain government spending. Governments just borrow without an apparent constraint, encouraged also by the ECB’s low interest rate policy. As a result, a good index of economic freedom also measures the freedom from excessive government spending, for that too can enslave. If not today, then certainly the future generations as debts either have to be repaid or reneged upon (with all the consequences). How has the EU performed in this sub-index? 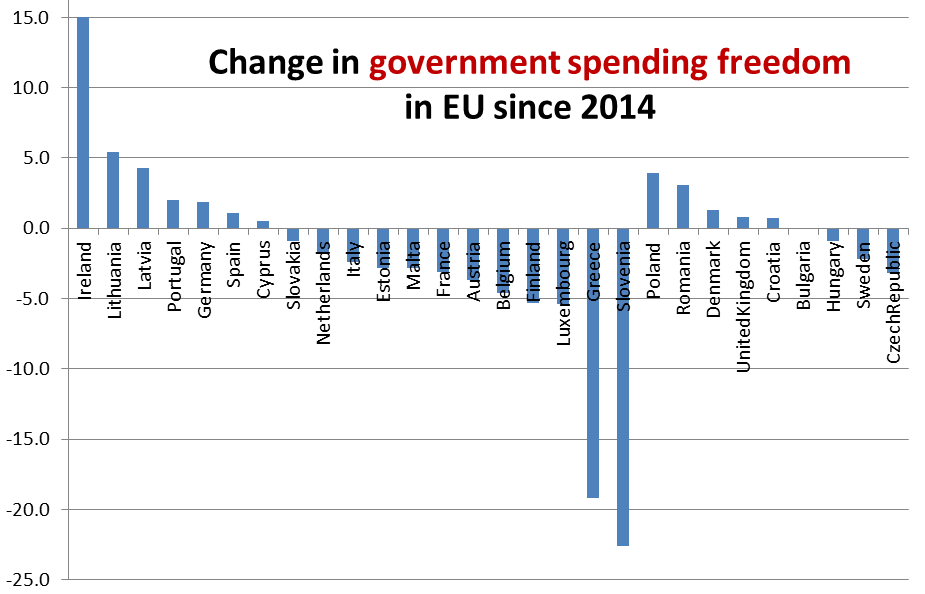 Once again the picture is dominated by three outliners. This time, however, they are all in the Eurozone camp, and although Ireland does well, having grown this particular freedom by 15 index points, it is more than offset by Greece and Slovenia whose government spending has increased greatly over the past year. The averages tell how dramatic this story is – Eurozone countries have lost 2.3 index points on average while the non-Euro countries have gained 0.4 points.

The picture is very similar in most other sub-indexes. Non-Euro countries have gained on average 2.8 points in freedom from corruption while Euro countries have gained only 0.3 on average. Other relative scores are 1.1 vs 0.5 in investment freedom, 2.8 vs 1.6 in monetary freedom, 1.0 vs 0.2 in labour freedom, etc. Only business freedom is bucking the trend. This freedom fell in both groups on average, but in the non-Euro group much more so (-2.9 vs -0.6).

Of course, one year does not make a trend. Equally, there remains hope that the Eurozone countries will be able to re-enter their path towards more, not less freedom, if not before then at least when (or if?) the stormy waters of the financial turmoil have calmed. Meanwhile, however, non-Eurozone countries are doing better job at improving their economic freedom, especially in its most fiscally related aspects. 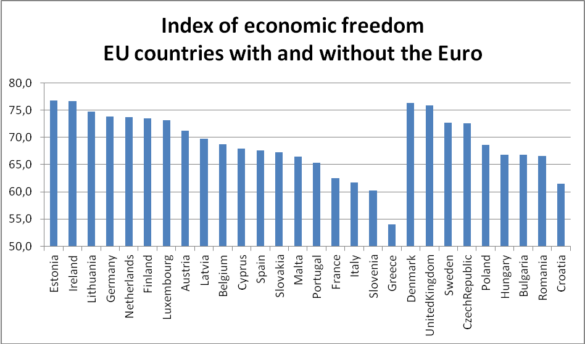 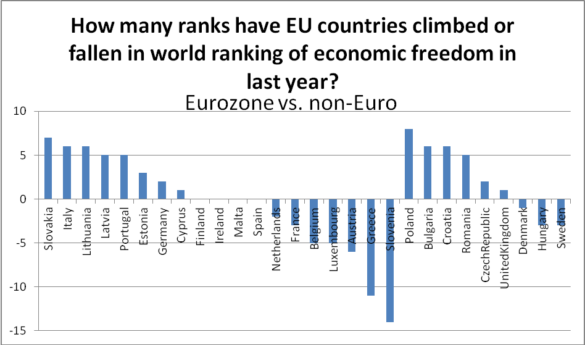 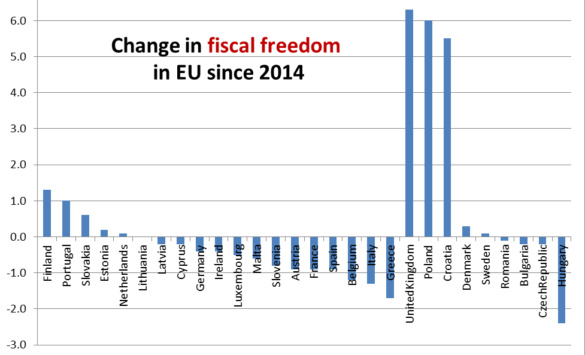 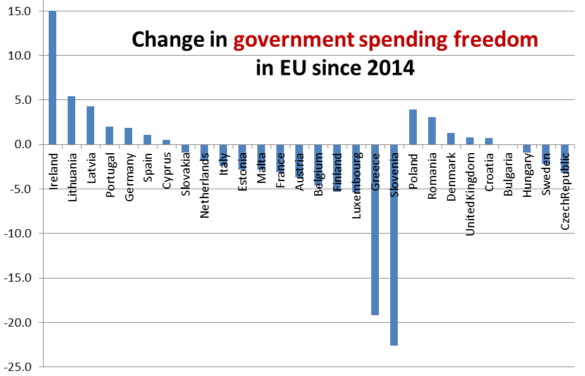 Greeks have the safest jobs in the euro area