Copyright 2022 IREF Europe
Home » EU has too much money: The Proof
Online Articles 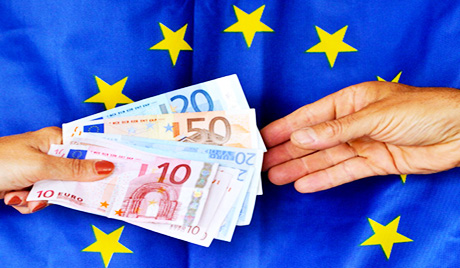 How do you know that any institution has too much money? When it does not manage, in spite of best intentions, to spend them all. Then there is room for scaling down the budget. The money will not disappear – it will be spent by the original “donors” instead. We show that the EU is, at least to some extent, such institution.

Subsidies are called “Growth”, in Eurospeak 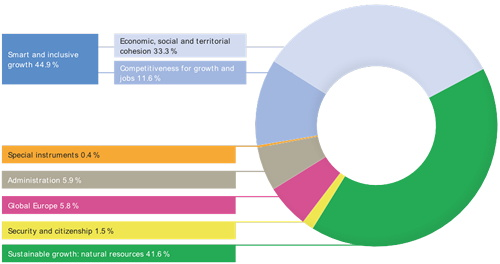 The European Union has a budget. It spends most of it on two things. Subsidies to agriculture, and subsidies to poorer regions. A rough idea of their relative sizes (in the 2014 budget) can be gained from this official EU Commission’s decomposition. Agricultural subsidies are euphemistically called “Sustainable growth” (green) and poor region subsidies are called “Smart and inclusive growth” (light + dark blue). Each of the two subsidies comprises over 40% of the budget. This amounts to about 120 Euros for each subsidy, every year, for every EU citizen, including infants.

Researchers are forever trying to calculate whether the money is spent “wisely” or efficiently. Their results, naturally, depend on what they consider as wise spending. Much less frequently is the total level of spending in each programme questioned.

And yet it should be. A government programme which does not even manage to spend all its money is surely bigger than it needs to be. And that is precisely what is happening, year after year, in one of the two main EU programmes. This text traces this “unspent money” which can be safely returned to the EU citizens. They will do a better job of spending it.

How EU allocates the money to countries

Given that they are supposed to equalise the differences, one would expect that the poorer a region or country is, the proportionally more money will be spent because there is a bigger “gap” to fill. The funds are allocated to member states in 7-year plans. Allocation of the total of 174 billion EUR over the last period (2007-13) looked like this: 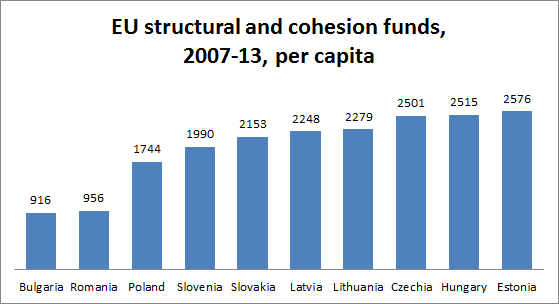 The chart reveals that the poorest countries of Bulgaria and Romania are receiving the smallest amount per capita. Overall there does not seem to be a clear relationship. Rich countries are both among the low receivers (Slovenia) as well as among the high receivers (Czechia). The main reason why Poland gets a sub-par payment is probably the very large size of its population: at-par payment would be really large in total, and thus politically less acceptable.

We can answer the question whether countries with a larger wealth gap actually do receive greater support with the following chart of the fund’s generosity relative to the country’s wealth. 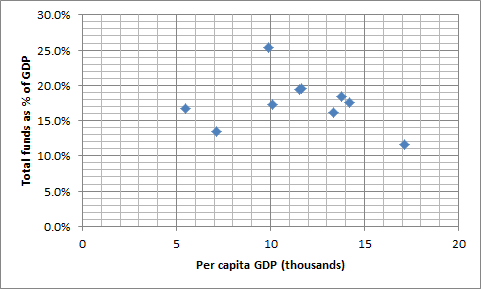 There does not seem to be an overall relationship between the level of support and how rich the country is. Only if we declare Bulgaria and Romania, the two leftmost dots, to be special cases, the remainder of countries do start to follow the rule of decreasing support for those who have less of a gap to bridge.

In terms of intent, therefore, the centrally designed EU allocation of structural and cohesion funds does roughly follow the programme’s objectives (with Bulgaria and Romania as a separate category).

That, at least, is the intent of central EU authorities. Final spending picture can be quite different, since countries do not end up exhausting the whole allocated budget. Worse still, some did not even plan to.

How countries allocate the EU money

The way that countries spend this money is by accepting (or denying) applications by people (and/or companies and institutions) who want a specific sum for a specific project. As it can be reasonably expected that not all granted projects will actually materialise, it is quite acceptable if countries actually promise more money than is available: not everything will be actually claimed. And so Hungary and Bulgaria did approve projects totalling more than 100% of the sum allocated for them in the EU budget. 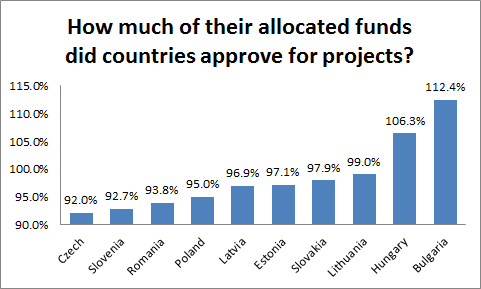 All countries, however, failed to even exhaust the budget even at the approval stage. Czech Republic was the worst, leaving 8% (over 2 billion Euros!) of its money unassigned to any project. There could be many reasons for this, but given that there were altogether 7 years over which to “find” eligible projects, clearly too much money was allocated to the Czech Republic and others, relative to what the country (and/or its administrators) were planning to use.

Not planning to spend its whole budget may be odd, but at least the shortfall is relatively small, less than 5% for most countries. This is nothing compared to the sums which, although approved, do not end up being actually spent.

How much of the money was actually used

Some projects approved for funding fail to materialise. Subsidised companies can go bankrupt, people originally interested in the project change their mind, co-payment funds fail to materialise. That is not surprising. What is surprising, however, is just how many of the projects in the structural and cohesion funds must have gone awry.
The following chart shows the actually used proportion of funds given by the EU to the countries. 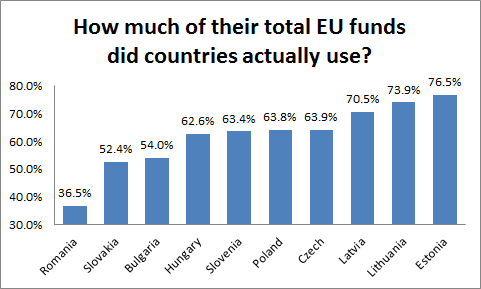 The numbers are staggering. Only one country (Estonia) managed to spend at least ¾ of EU funds over the 7 years. Romania managed just a little more than a third. In Poland alone, for example, almost 25 billion Euros ended up being unused. Over the whole CEE region, almost 70 billion Eurosbudgeted for in the EU budget ended up not being spent.

Clearly, the EU budget is actually much bigger than it needs to be.

The “failure to spend” (itself a paradoxical term but much used) has created problems for EU administrators. They are now creating various committees and reports on how to increase the “absorption capacity” of member states. The language may be significant. When we talk about “absorbing”, we usually mean soaking up something bad, like wet dirt into a sponge. Is that the right language to use for talking about spending tax-collected money? Do we really have to seek which country should do more soaking up and absorbing this money? Would it not be easier just not try to spend the money in the first place, if countries have such trouble doing so?.

There are essentially two ways of increasing “absorption capacity”: one sensible, and one terrible.

– If countries increase the proportion of money actually spent by making sure that more projects are successful because they are properly prepared (and do not exist only because there is some money going), all will be well. Unsuccessful projects only mean waste of time (and money) of everyone involved.

– A more sinister – though perhaps more realistic – way of increasing the “success rate” is by bending the rules: Granting the money even to projects which clearly demonstrate some problems. Such option sounds sweet to national administrators since it “gets rid of the money” and thus avoids the scorn of central EU administrators for failing to use up the budget.

There is increasing evidence that national authorities are more and more lenient. If true, it would mean that the EU budget is not only much bigger than it needs to be, as we have shown earlier, but that it is also increasingly badly spent.

Greece cannot save itself by taxing exports