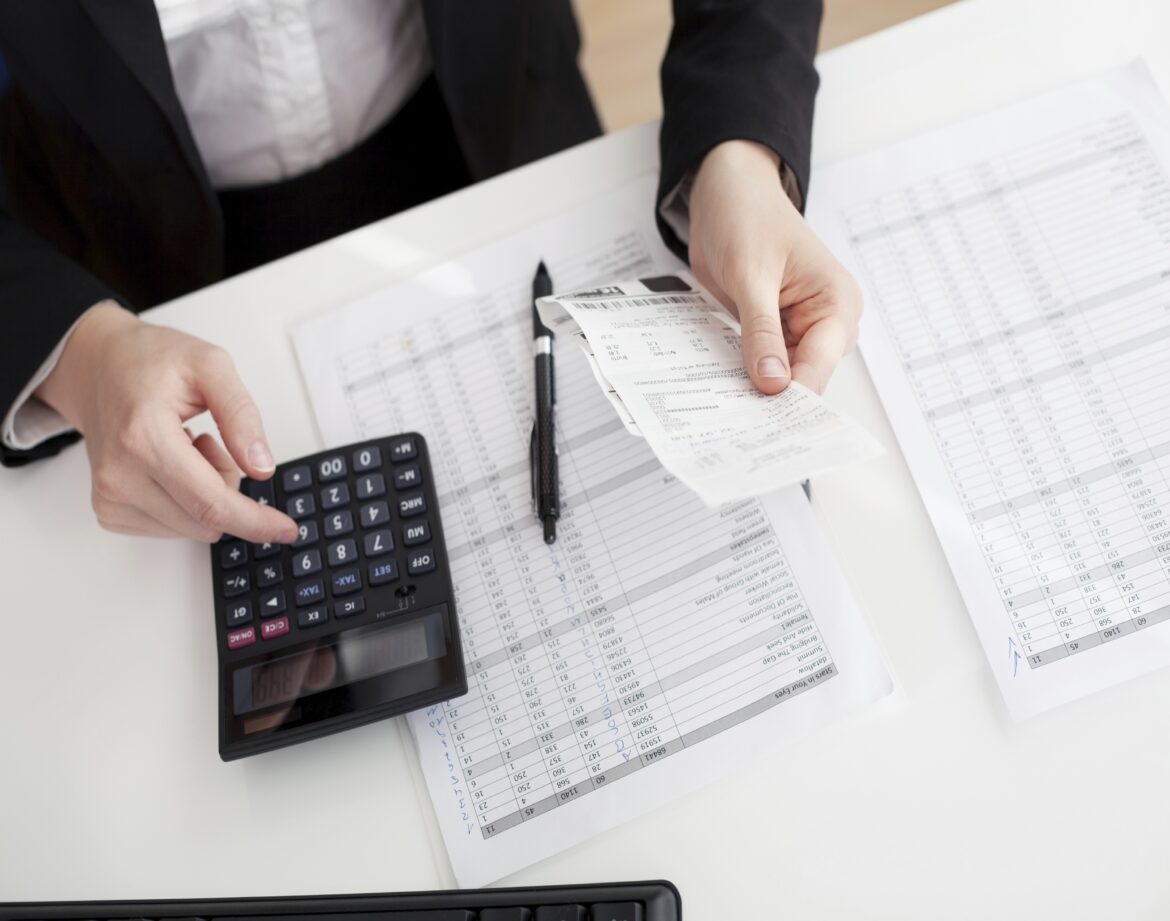 Businesses both pay taxes and collect them from others for the government. How administratively burdensome is this activity across the EU, North American and EFTA? We assess the evidence and identify, whether it is the frequency of filing or complicated tax returns that matter.

“Competition” appears frequently in the dictionary of the EU. Competition is declared good in everything – except for taxes. “Tax competition” is becoming a rude word, because it is believed to lead to a “race to the bottom”. The French MEP Lamassoure, chairman of the new EU Parliament tax rulings committee, notched this rhetoric up a bit when he said recently that “fiscal competition is harmful when it sparks a fiscal war between the different EU member states and leads to the fragmentation of the single market and the disintegration of the Union”. War and disintegration? Powerful stuff.

The most obvious way to assess the degree of tax competition is to consider tax rates. Corporations can change domicile relatively easily so tax differences do matter across the EU: the single market can be accessed equally well from any member state (at least in theory). Yet tax rates do not necessarily paint the full picture of how burdensome taxes are in different EU states, chiefly because of:

• Exceptions. Most modern tax codes are riddled with special provisions which make the effective tax rate different from the nominal
• Subsidies. Many companies receive them and it is not clear how they should be treated when assessing tax competition. To attract companies, states compete among themselves also on arbitrary investment incentives (negative taxes), for example.
• Filings. Specifics of the tax code create an extra burden in resources that a business must spend to file and pay a tax return, resources which are never collected by the government; etc.

All these will, of course, differ from business to business, depending on its size, sector or ownership structure. The first two defy easy comparison across countries (exceptions are difficult to match), but differences in administrative costs in compliance can be measured for a “typical company” for each country. For the last ten years or so, the World Bank has measured how long it would take to fill out the forms and pay taxes for a typical business with five domestic owners, capital of about 100 average person’s earnings, with some property, machines, vehicles, etc. (see full description).

The 2015 report has just been issued. The common method allows for a comparison not only within the EU, but also with North America and the EFTA countries (Iceland, Norway, Switzerland; and Liechtenstein (for which no data are provided, however)). The chief admin costs measured are frequency of filing and total hours spent on a task (in a year).

How many times does a business have to pay taxes?

Businesses do not administer only their corporate taxes. Governments oblige them also with administering many kinds of taxes on behalf of other payers, such as suppliers (VAT), workers (labour tax withholding), etc. In effect, companies are doing part of the tax authority’s administrative job.

This is not as trivial as may be suspected. Although accounting software does some part of the task “automatically”, governments generally want the money thus collected handed over as soon as possible. As a result, although individuals generally file their (income) taxes only once a year, businesses have to file and pay various taxes many times a year. Unlike the calculations, this filing and payment are in general not automated and may constitute an extra burden on busines in high frequency countries. 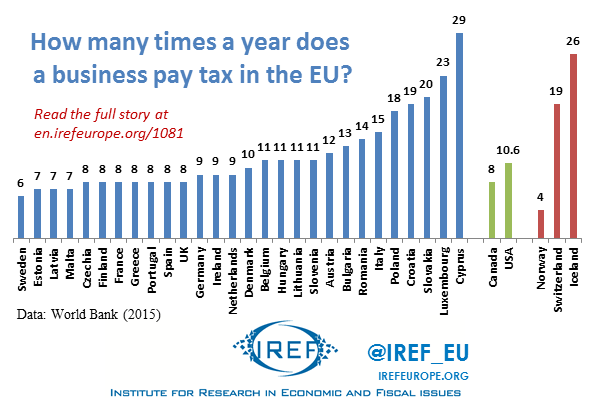 The experience across the EU is mixed and no obvious picture emerges. Northern countries do tend to be in the low-frequency camp. However, the “usual suspects” of Portugal, Spain, Greece or France have low frequencies, too. Prior connections are no guarantee of current similarities, as suggested by the Czech and Slovak Republics residing on opposite ends of the spectrum. Even the alleged tax haven of Luxembourg requires 23 filings. Of the large economies, Italy has the highest number (15). EFTA does not fare much better, Norway has only 4 but the other two have comparatively high number of filings. Much larger, certainly, than the two North American states.

How many hours are spent on tax administration?

If the tax forms were the same in each country, we would expect high frequency countries to also show a large overall time burden. However, the example of Luxembourg visibly demonstrates the opposite: With the second highest filing frequency it has the lowest total compliance cost in hours – only 12% of hours necessary in Bulgaria. This cannot really be explained by the fact that we are comparing EU’s richest and poorest country. Bulgarian businesses do not merely employ more accountants because their wages are cheaper. The burden is estimated directly from the complexity of the tax filings themselves. 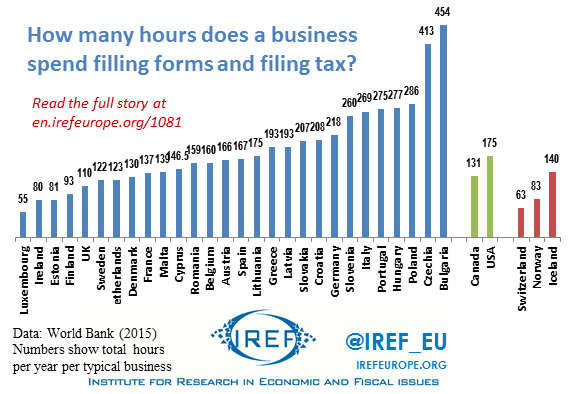 Eastern Europe retains its reputation of highly administration-heavy tax codes: except for Estonia and Romania, all post-communist countries are in the bottom half of EU countries. Both North America and EFTA enjoy much smaller burden by comparison.

So what creates these high costs? Two possibilities exist:

• Either the tax forms take long to fill out and file, so high frequency countries are those with high overall burden,
• Or tax code requires difficult information and monitoring in the high burden countries, and the frequency does not matter all that much.

To test this, we have calculated the overall hours cost per filing. If such ranking looks like the frequency ranking, filings are responsible. If the graph resembles the total cost story, the burden is driven by the complexity of forms.

How complicated are the tax forms?

It is quickly obvious that overall costs are closely associated with hours per filing, so additional filings do not add much to the burden. In fact, many high frequency states enjoy the lowest overall hours burden, so it is the complicated tax forms which are responsible. 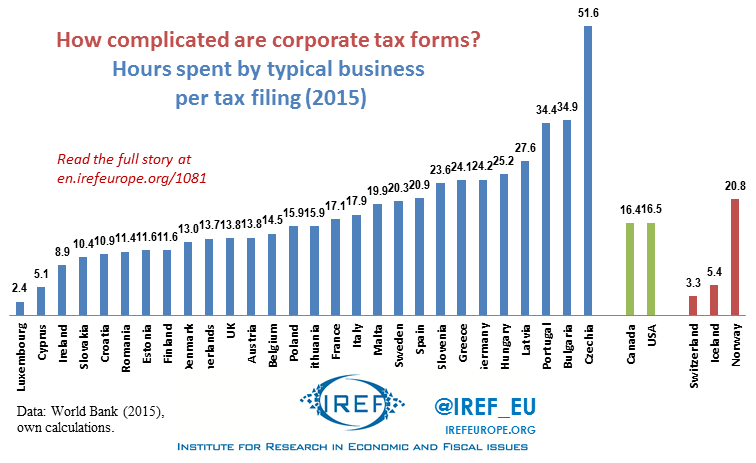 The table identifies the Czech Republic as the basket case of tax complications. Although Czech businesses file “only” 8 times a year, their hours per filings are more than 3x the EU median and 21x that of Luxembourg. EFTA countries also confirm the story that it is not the frequency of filing that creates the burden.

The policy prescription is obvious. Governments do not have to sacrifice “frequent access” to the tax revenue paid – or collected – by businesses. E-filing and repetition of the same form both mean that a typical business does not suffer greatly from frequent filings. It is the complicated information required that burdens them. To make matters worse, complicated tax forms open up more potential loopholes and even more “special treatment” so shunned by the top officials in the EU. If a “postcard tax return” is good enough for individual income tax, isn’t it time it be considered for other taxes, too? 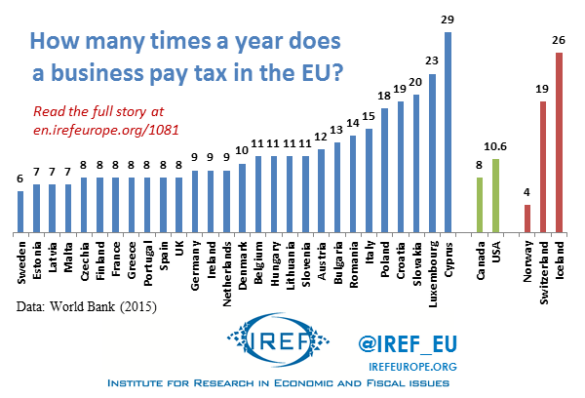 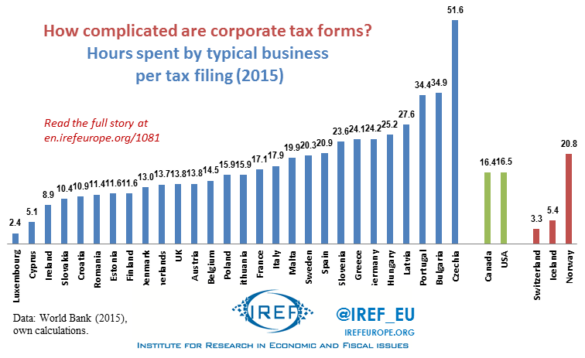