How do you make a credible list of countries whose tax policies you don’t agree with? Do you ask only half of your members, let them decide their own criteria, and have it approved by a few interest groups? If you are the EU, then yes.

A blacklist of 30 tax havens (see box) has just been published by the Commission and in early July the European Parliament will debate applying some sanctions to states on the list.
Other than the obvious problem that the EU is not the UN and monitoring foreign nations’ fiscal policies is not in its job description, the exercise suffers from two additional major flaws which render it pointless:
The list is based on a flawed method and a flawed objective: it confuses a problem with a symptom of a problem.

No synchronised criteria. Officially, the list contains countries non-compliant with “standards of tax good governance (transparency, exchange of information, and fair tax competition)“. EU Commissioner Pierre Moscovici goes even further and calls the countries “non-cooperative”, as if cooperation with the EU Commission were a world-wide standard of good governance.
– These criteria have never been explicitly specified or ratified. Each assessor is free to use his own definition of “tax good governance”. Paper-shifting continues: In December 2012 the Commission adopted an Action Plan to strengthen the fight against tax fraud and tax evasion. The group have met about three times a year ever since, and still have not produced any common criteria. On June 17, 2015, the Action Plan created a “Platform for Tax Good Governance” to promote the same – but not in the EU but in third countries. The tax haven list is the Platform’s first output.

Incomplete assessment. The blacklist is based on assessments by only 15 member states, each with their own criteria (see picture); effectively it is only 14 because Germany only applies a “weak” criterion and consequently does not consider any third country non-compliant. The other 13 member states have not produced their assessments. In addition to the 28 member states, 15 organisations (usually of accountants) are also members of the Platform – though they haven’t contributed to the blacklist assessment.

– Creating an official EU list based on opinions of only a half of member states is very unrepresentative. The selection of non-state members invited to the platform also seems very arbitrary – it includes purely national professional groups from three member states (FR, DE, NL), lobbying groups with an obvious agenda (e.g. CIDSE, Christian Aid), and somewhat bizarrely even the American (!) Chamber of Commerce. There is nothing wrong with listening to their voice, but giving them a permanent seat in EU policy-making is hardly democratic.

Political voting. IREF calculations show that there is a huge variance between individual member states’ assessment, as the chart shows. 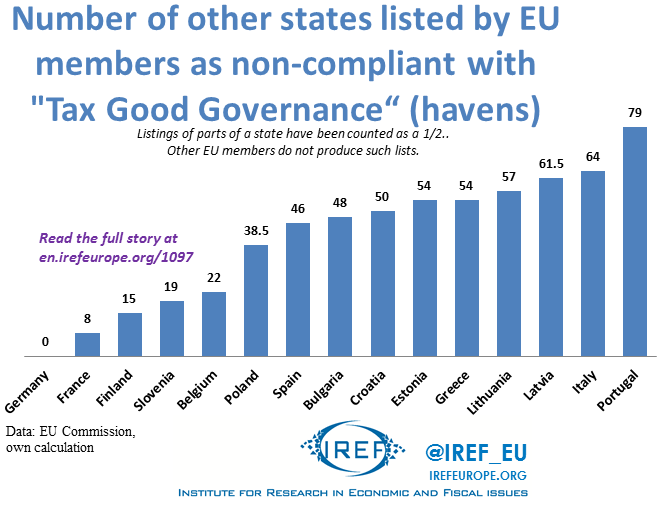 – Each member state uses different criteria for blacklisting and there is no limit to the number of proposals for the blacklist. For example, France lists 8 tax havens, Portugal almost 80. Clearly they must be judging by very different standards. There also seems to be a pattern emerging – with the possible exception of Spain, the most condemning member states are PIGS + post-Soviet Baltic states. In an objective assessment, we would not expect economic geography to play a role.

Arbitrary cut-off. A country is included on the blacklist if 10 or more member states (each with own criteria) list it as non-compliant.
– This still means that a country can be blacklisted by just over a third of member states. The strict cut-off point at 10 also leads to paradoxical results. Jersey is listed by only 9 countries so is not included, neighbouring “identical twin” Guernsey has 10 votes and so is included – but only because the Commission counted Poland’s half-vote (“Sark only”) as a full vote for Guernsey (which Guernsey now protests). More political in-fighting and murky lobbying can be expected if and when policy consequences are ascribed to the blacklist in July. Already, Spain is lobbying for a tenth “vote” to be cast on its hated Gibraltar (it currently has 9), and votes to be removed from its friendly Andorra (it currently has 11).

Why only non-EU? As it stands, member states can only list non-member states as non-compliant with “tax good governance”.
– There is no good reason why EU members should automatically be assumed to have “tax good governance”. To underline this point, at least one European Economic Area member (Liechtenstein) has made it on the list. If EEA is a legitimate target, why not other EU states? Strictly speaking, on criteria used by some member states, Luxembourg or the Netherlands should be “blacklisted”, too.

The blacklist hides behind a façade of positively sounding labels of promoting “good tax governance”. By that it means “transparency, exchange of information, and fair tax competition”. Informally, it is understood to be an official enemy in the “Battle against tax havens”. This battle is flawed, and the three promoted goals are bogus.
– Battle against tax havens is a symptom. Tax havens are not the problem – they are an answer to a problem. If there were no demand for their services, they would not exist. EU countries have gotten used to relying heavily during the post-war boom on taxing companies – it used to be difficult for them to run away. Slow communication technology meant that the link between a country and a company meaningfully existed. On a global marketplace with new technology it doesn’t – and yet governments still consider it an (unfair) tax loss when the old technological chain between a company seat and its production is broken.
– Transparency sounds like a sound principle of “tax good governance”: a tax authority should establish clear and generally known tax rules and then stick to them. Special undercover tax deals smack of corporatism. Yet in this respect it is precisely EU member states (and not just Juncker’s Luxembourg) that should be admonished. Yet member states are blacklisted from being included on this blacklist…
– Exchange of information is a codeword for the EU (and member states) wanting third countries to rat out to them the income of their tax payers so that the EU can also try to get a slice. It has nothing to do with “tax good governance”.
– Fair tax competition is a codeword for the principle “you are free to set any tax rate as long as it is higher than ours”. If it is lower, it is clearly “unfair”, usually “because you are just a small island and don’t have to build highways and social security” and such like. Clearly, such “tax competition” is no competition at all.

“Tax good governance” should primarily mean not driving taxed subjects away. And that’s a role for EU states themselves, not the blacklisted rest of the world. 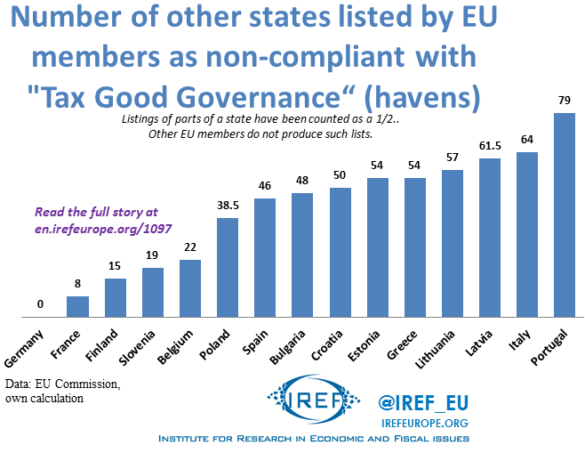 The “Other” European Banana Problem

Propaganda Wars: interest on Greek debt is not “profit”