Copyright 2022 IREF Europe
Home » EU should not encourage Nigeria to increase income taxes. (Or anyone else.)
Online Articles 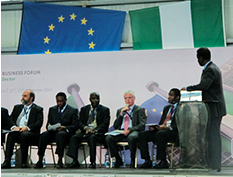 International institutions like IMF or World Bank do often give economic policy advice to poorer countries, but generally only after thorough analysis. EU does not specialise in such anaislys, and its diplomats should avoid dispensing such unfounded advice altogether.

EU Embassador to Nigeria Michel Arrion called upon the Nigerian government to increase taxes on “rich Nigerians in accordance with their earnings”. This will, according to him, “fast track the growth of the country’s economy”.

Some taxation is perhaps needed to finance basic government functions, and in Nigeria perhaps also some infrastructure investment. Under some circumstances, this may be financed from increased government revenue, especially if it reduces the country’s long-term reliance on foreign aid. But recommending an increase in income tax on the rich as a path to prosperity is wrong on many levels, politically as well as economically.

1) Already in place. Like most other countries, Nigeria currently charges progressive income tax rates, meaning that “rich Nigerians” already pay more than “in accordance with their earnings”.
2) Fiscal sovereignty. EU is not an organization of economic advisers. It stands on shaky grounds even dictating fiscal policy to its own member states. It has no ground to stand on advising other countries.
3) Economic nonsense. Increased taxation cannot “fast track the growth of an economy”. Economy grows when people can use their earnings on further consumption or investment. Increased taxation dilutes this and reduces growth.
4) Wrong causality. There is a way to increase earnings from income tax – but it would require lower, not higher rates. The greater economic growth from lower taxes would increase people’s incomes and more would be collected from given income tax. As people grow richer, their incomes would rise, and unless government redefines the income brackets for progressive tax rates, many people would become liable to pay a higher tax rate automatically. Progressivity even helps here since many people would fall into a higher income bracket and become liable to a higher tax rate.
5) Underground economy. Additionally, high tax rates encourage tax evasion. Further increases in rich people’s income tax would only encourage them, since rich people may find it easier to avoid taxation than the poor. The government may then find that the revenue from the rich will actually decrease, and it will be the poor who will have to “make up” the difference. And making the poor even poorer is never a “fast track to growth”.
6) Rich will run. Even if the rich don’t move to the black market and shadow economy, they are more likely than the poor to move to another economy – by emigrating. Brain drain is bad enough, a poor country needs to nurture their rich, not give them another reason to go.
7) No motivation. If the rich don’t go “underground”, increased taxation will reduce their motivation to work and produce. The demand for labour will drop, and the wage rate would follow.

Poor countries suffer not only from poverty, but also from large income inequalities. These may indeed pose some obstacle to growth. But as economists Bird and Zolt have shown, income tax reforms have been of limited use. Much more important are other reforms – like property rights reform giving the poor access to collateral for their personal development, better infrastructure for exchange and specialization, and better targeting of social programmes for the truly needy.

If the EU wants to help Africa, it could start by closing down the Common Agricultural Policy and allowing Africans make some money by feeding Europeans. Otherwise Mr. Arrion’s advice sounds like saying “we in Europe have made work very expensive and uncompetitive – so you better stop competing and do the same”. That would be a terrible message to send.