Corona bonuses for the public sector, mask vouchers for pensioners, and state-subsidized family vacations – feel-good policies are making a big comeback in the wake of the pandemic. However, the administrative, marketing, and procurement costs of these measures are far greater than the benefits. Yet, the German government is a now introducing a new and rather expensive initiative: the 9-euro ticket for public transportation. 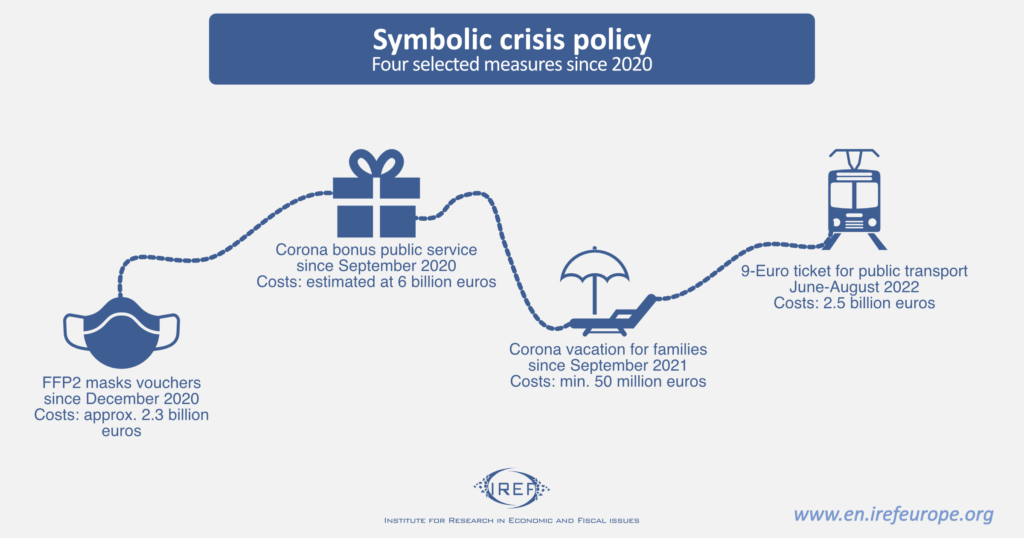 6-euro masks from the pharmacy

The now omnipresent FFP2 protective masks were a rare commodity at the beginning of pandemic. To protect vulnerable groups during the 2020/2021 winter, the then Minister of Health Spahn decided to send mask vouchers to the elderly, the chronically ill, and other at-risk groups. Vouchers for initially three, later six masks could be redeemed in pharmacies, which were rather generously compensated with taxpayers’ money. The Taxpayers’ Association estimates the cost at around 2.8 billion euros. According to the Federal Audit Office, the amount was “just” 2.3 billion euro, since part of the vouchers was not redeemed. The lion’s share of these funds went into the pockets of the pharmacists, while 10 million euros were spent on printing and mailing the vouchers.

Indeed, protecting vulnerable groups is important. However, a simple comparison shows that the health minister in charge was primarily concerned with media-effective symbols and hardly with a cost-efficient use of funds. At the time the vouchers were sent out, discounters and drugstores such as LIDL and dm were already selling the same protective masks at a third of the price, and were ready to offer the ministry even more favorable conditions.

Expensive bonuses for the public sector

In the wake of the Corona pandemic, the unfavorable working conditions in the medical and nursing sectoralso attracted nationwide attention. Instead of launching structural reforms, such as a reorganization of diagnosis-related payments and more flexible financing for hospitals, at the time the government preferred to follow the path of least resistance, and in September 2020 handed out to the nursing and medical staff a lump-sum bonus of up to 1,000 euros. A further payment followed in 2021, and a third round of bonuses is now in sight.

At the same time, the legislator extended the possibility of one-off special payments to employees in other sectors by resorting to suitably designed tax breaks. Germany’s public sector extensively benefited from this opportunity. In 2020, federal and municipal employees received a special payment. State and federal employees followed in 2021.

It is not clear why senior academic staff, members of the Bundestag and judges, whose jobs were neither endangered nor made particularly unpleasant by the pandemic, deserve a tax-free bonus payment. With around 5 million public sector employees and a bonus of up to 1,300 euros, the cost amounted to some 6 billion euros. Public authorities, public service providers and trade unions defend the policy by pointing out that wage settlements would have been correspondingly higher without bonuses.

Corona vacation: A lot of effort for just a few households

Three days before the federal election, in September 2021 the federal Family Affairs Minister announced the Corona vacation bonus for families. Families who receive social benefits, have low financial resources, or have a parent or child with a high degree of disability enjoy subsidies covering 90% of the accommodation costs for up to seven days. A total of 50 million euros has been made available to support this initiative.

The program was announced with some marketing effort and pictures of happy families, and the grand coalition probably hoped that it would boost its electoral fortunes. After the election, however, it quickly became clear that the hastily concocted Corona vacation programme had some weaknesses. Within a very short time, the most sought-after destinations were taken by those who knew first. Moreover, a large number of low-income families were unable to participate because travel costs are not part of the funding.

However, the most serious obstacle to the Corona vacation turns out to be the selection of eligible vacation destinations. The Ministry of Family Affairs handpicks the approximately 125 facilities eligible for Corona vacations. More facilities are added slowly, although cheap potential destinations in neighboring countries are excluded from the outset.

We may have overcome the worst effects of the Corona crisis. Yet, the fuel price shocks triggered by Russia’s invasion of Ukraine has now encouraged further rounds of subsidies. To counteract the higher cost of mobility, the German government is launching the 9-euro ticket. All citizens will be able to use Germany’s entire public transportation system for 90 days starting in June – for just 9 euros per month.

There’s no question about it: offering nearly free public transportation is very popular, especially during the vacation season. It is less clear that this is the best way of using billions of taxpayers’ money. For example, it is not obvious that the subsidy will lead to greater use of public transportation at the expense of cars. Moreover, the 9-euro ticket is likely to be used mainly for long-distance and vacation travel. This puts non-subsidized competitors of the railroads, such as privately operated long-distance buses, at a disadvantage. Be that as it may, the cost is going to be considerable: no less than 2.5 billion euro.