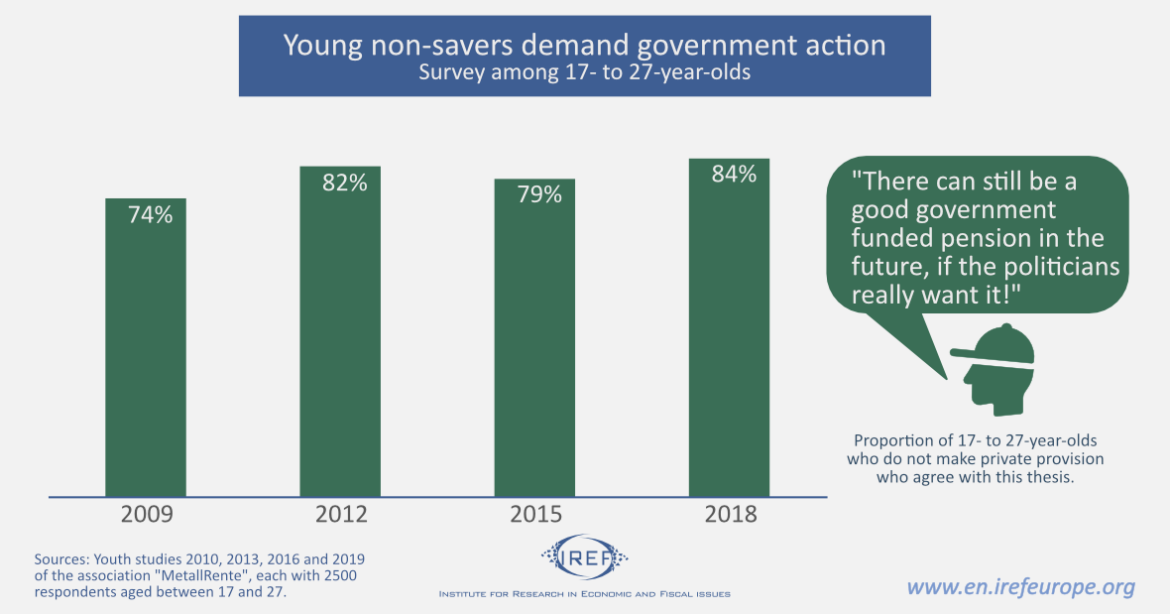 Young people’s attitudes towards retirement are contradictory: on the one hand, they don’t trust public pay-as-you-go pensions. According to recent surveys, around half of the respondents do not expect significant retirement income from this source. On the other hand, private efforts are insufficient to close the expected pensions gap.

Put differently, despite political promises of stabilisation, young people are clearly able to recognise the weakness of the public schemes. Yet, the debate still focuses on how to stabilise the unfunded state system, and neglects to examine the opportunities offered by the private sector.

Ever since reunification, the stabilisation of unfunded pensions has ranked high on the German political agendas. Governments have always tried to signal to younger generations that their pension is safe by raising the retirement age, increasing contributions, and decreasing benefits relative to wages. However, these reforms do not seem to bear significant results, and many young people fear that the unfunded scheme will collapse entirely. In a Deutsche Bank report from November 2019, 54% of the 20-65 year-old respondents claimed that they expect the system to break down “sooner or later”. A 2019 study by FORSA led to similar conclusions: 82% of the 18-29 year-old respondents deemed their pension “unsafe”. According to a recent YouGov survey, 40% of 25-34 year-olds do not expect to receive a pension out of the unfunded scheme. Such a pessimistic attitude is remarkable considering the generally high trust in public institutions.

As a matter of fact, a total “collapse” of the public unfunded system is unlikely, and the government will not eliminate all claims to the benefits. However, it is plausible to assume that in the next decades the benefits will be cut more than it is currently anticipated. In the end, public pension insurance will probably cover only basic needs.

The young generation has plenty of reasons for pessimism. Demographic change will ensure a steady decrease in the ratio of employees to retired people, and since the older generations make up an increasing amount of voters, politics will shy away from reforms that would hit those who are currently retired. Instead, the government will focus on cutting benefits for the young. Certainly, immigrants may pay into the fund today. Yet, they also acquire pension claims themselves. Likewise, civil servants and privately insured people may fill the gaps today, but they will require support tomorrow. The unfunded scheme, once designed for a young and growing society with strong productivity growth, reaches its limits in an ageing and slow growing country. These limits can be politically delayed, but can hardly be eliminated without drastic demographic changes.

Despite all problems and fears, the young Germans are not saving enough. According to MetallRente, only 48% of 17-27 year-olds made retirement provisions in 2018 – down from 55% in 2009. 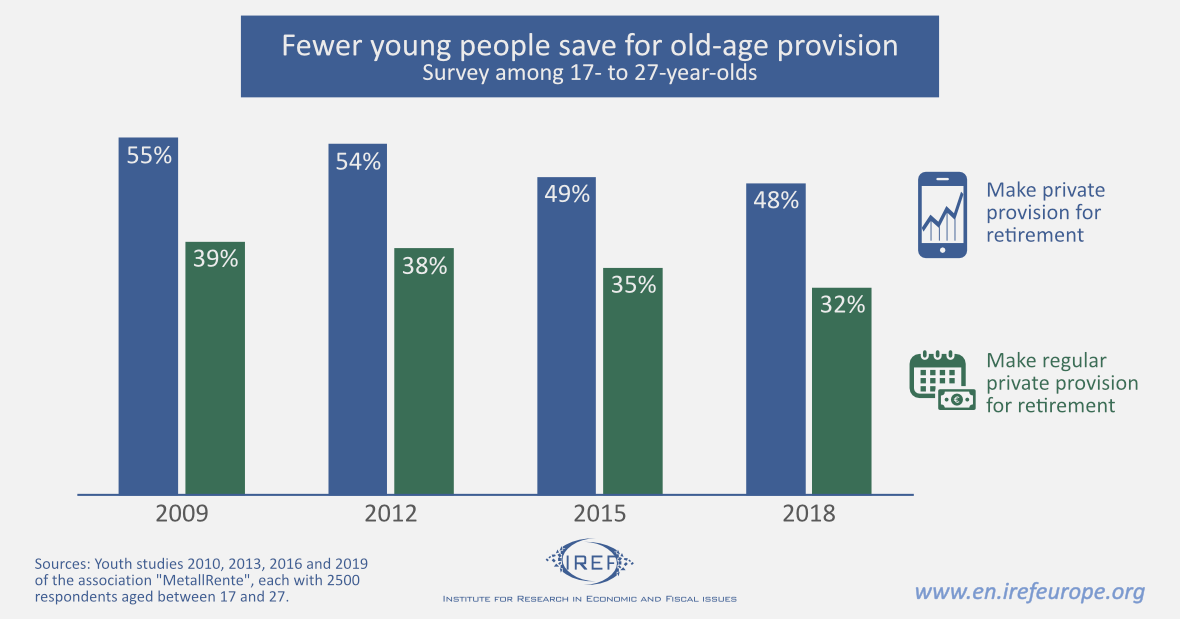 Moreover, the Youth Study by MetallRente shows that in 2018 only 28% decided to buy shares in view of future retirement. Conservative asset forms like savings accounts remain far more popular. 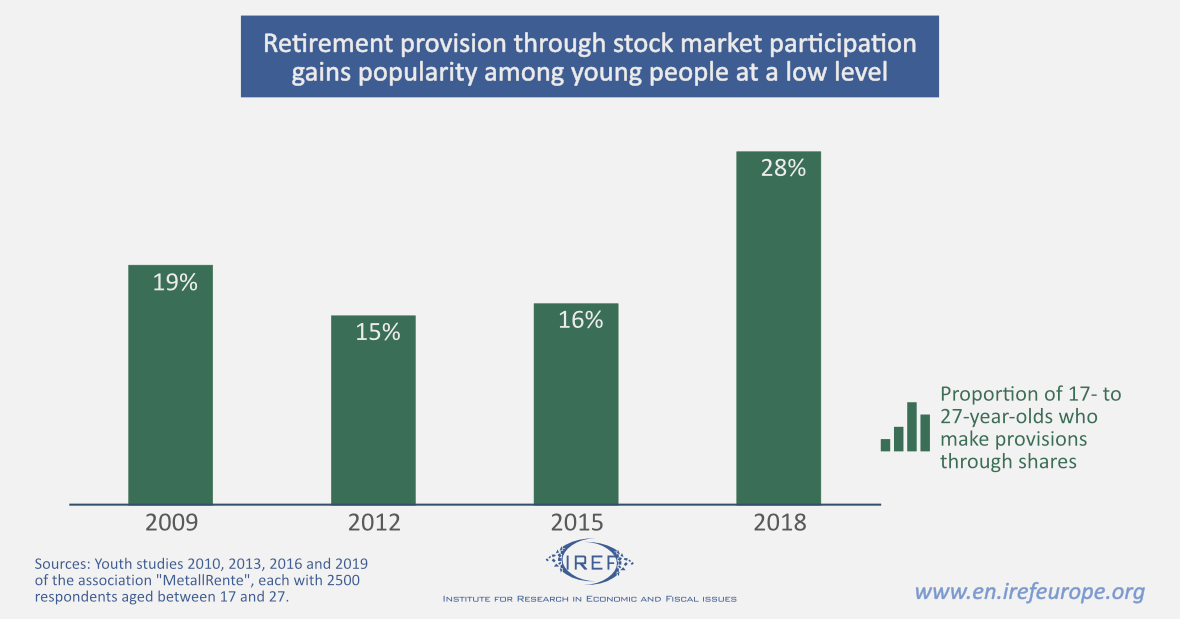 One frequent explanation for low private provision efforts is the lack of information about the alternatives. Surveys indicate, however, that the opportunities and benefits offered by private pension schemes are well-known. It has never been easier to invest even small amounts on the global capital market and profit from global economic growth.

A further explanation is that people are short-sighted, and systematically underestimate the savings necessary to secure the lifestyle they desire once they reach old age. This phenomenon is known as “time inconsistency”, and is often used to justify compulsory minimum saving rates by public or private retirement schemes. However, it is not clear whether systematic short-sightedness really plays a relevant role.

One may also conjecture that while young people mistrust the pay-as-you-go model, they believe that the government will eventually replace smaller pensions with other kinds of expenditure. In a MetallRente study from 2018, 84% of not privately insured young people claimed they trust that the state to fill in the gaps “if it really wants to”. 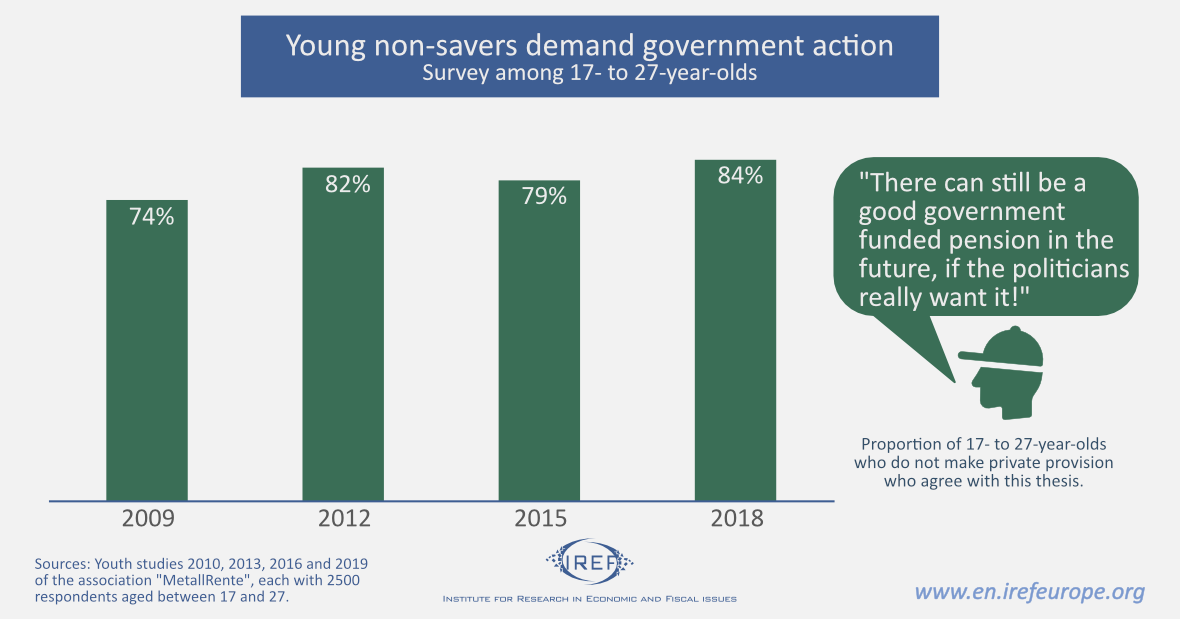 Precedents support these expectations. Germany has provided for an entire generation of pensioners both after the Second World War and after reunification without having had previous cash inflows.

Taxation is hardly a solution

A popular solution is to replace the pay-as-you-go model by taxation. Today, federal grants already make up about a quarter of pension payments. Of course, a completely tax-financed pension scheme would merely shift the current burden from social insurance contributions towards income tax and VAT. Niche taxes like a financial transaction tax, an inheritance tax, or a high-income tax are even less realistic. In a sentence, general taxation is hardly a reform or a solution.

In the end, by insisting on the foolish promise of a stable unfunded system, political discourse contributes to inflating the problem, distorting behaviour, and delaying viable solutions. Politics appears to present funded pension schemes as necessary evil, rather than as an opportunity. Transition towards a funded system with stronger individual capital stocks will be easier as soon as politics begins to change tack and stops creating illusions. 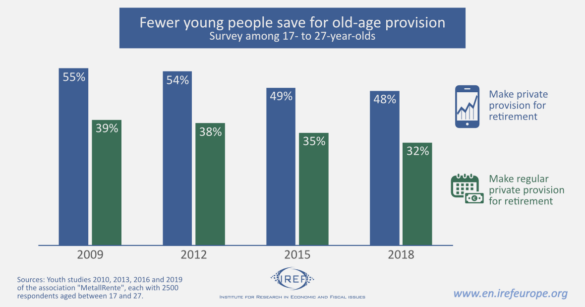 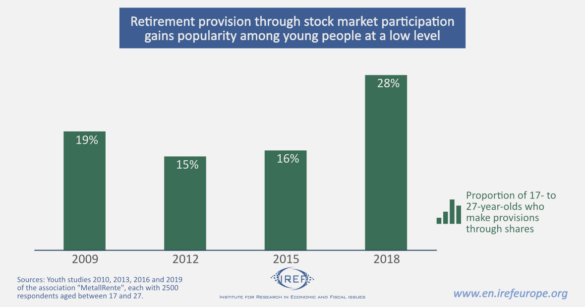 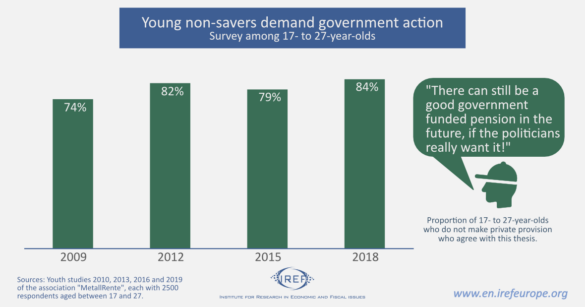