Fiscal assets and liabilities during a state divorce 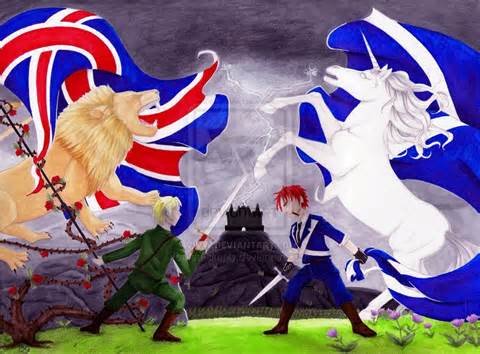 With the Scottish referendum around the corner and other ones looming on the horizon, IREF investigates the accounts of states thinking about a divorce. What are assets and liabilities to be split? Is the currency such asset, for example?

Thinking about a divorce…

A new argument has appeared in the British debate over the future of an independent Scotland’s currency: That the pound is an “asset” and therefore should be divided – and if indivisible, shared – among the inheritors. Although Alex Salmond, the champion of Scottish independence, has since been forced to retract some of the wording he used, the basic idea still hovers over the “Yes to independence” camp.

Let’s take the divorce simile as given (after all, the “peaceful modern breakoff” just over 20 years old that commentators invoke as a role model is called Czechoslovak “velvet divorce”) and before considering what are the national/governmental assets and liabilities to be divided up, let us in passing briefly consider how they should be split, in what proportion.

Splitting jurisdictions have generally favoured the “democratic” principle of per-capita share, although an “economic” principle based on ability to pay (in the future in case of liabilities and in the past in case of assets) is also thinkable. In case of Scotland this would mean that the rest of the UK should assume a greater-than-per-capita share of liabilities on account of its much richer South-East, but also a similarly overproportionate share of assets because it has traditionally been the English taxpayer that contributed a greater share, at least for the majority of the 20th century, with the exception of the period of rich North Sea fossil fuel “contribution” which is now rapidly dwindling anyway.

Fiscal liabilities to be divided.

Liabilities are a bit clearer to deal with. They all take the form of government’s “promises to pay”. Above all this involves the national debt, the sum of past government borrowings, with interest, still outstanding.

But there are also hidden fiscal liabilities that have not been converted into an explicit “promise to pay” but exist only implicitly, in the form of a government’s fiscal policy that entrenched certain expectations among the taxpayers. A classic case in point are old age pensions. Most contemporary European governments, and the UK is no exception, have discouraged people from saving for their retirement by “overtaxing” their income to pay current retirees and promising workers to do the same for them when they retire.

Because these payments will only be resolved after a potential independence, this is one potential thorn in negotiations of any fiscal authority trying to divide itself up. Any rule agreed to ex ante will produce one party gaining and the other losing from such agreement since economic and demographic circumstances 20 or 30 years down the line are unlikely to be predictable at the time of a divorce. It has, for example, been argued that Scotland should be especially careful in these negotiations since its life expectancy is quite considerably shorter than in the rest of the UK.

Real world divorces of the past also suggest that this is a complicated matter which is unlikely to avoid future challenge in the courts. Only recently a constitutional court had to re-examine the Czech-Slovak pensions settlement. And since it goes against an EU ruling, further cases can be expected.

Other implicit fiscal liabilities may be present, but the UK has the “advantage” of having already made large strides towards dividing them up. Take health-care, for example. The physical assets like the hospitals are an asset, not a liability, but the implicit promise to fund one of the world’s most generous healthcare provisions are definitely a fiscal liability. Especially in a country which has not, unlike most of the rest of the EU, adopted the pretence-game of paying for healthcare through a special tax called “insurance” and a healthcare “pseudo-fund” (which could be easily divided) but continues to pay the National Health Service out of the general taxation.

Fortunately, though, Scotland is already much in charge of its healthcare policy and is already endowed with sufficient freedom in fiscal policy to actually now boast of a “more generous health care system” than the rest of the UK. Indeed, wanting to continue to make more social(ist) fiscal policy also in other areas is quite openly one of the main reasons for wanting political independence.

Fiscal assets to be divided

Also here we can make the distinction between tangible (explicit) things that the government owns and things which it has an implicit “right to tax”.

In addition to hospitals, the government actually owns also embassies, some still nationalised industries, roads, museums, army barracks, etc. Most of these things would be easy to divide up, based on the soil principle of where it is located, one could predict some squabbling over which lucrative embassy locations will be handed over to Scotland in a 1:N sharing ratio. Fortunately there are no bridges between Scotland and England that would be difficult to divide in half (based on soil principle) or even 1:N (per capita), but a problem of (in)divisibility becomes real for example with nuclear warheads and their carriers (Trident submarines, in UK case) It has been argued that sharing those in a 1:N ratio will be both imprecise (because there so few of them and it’s a bad idea to cut up one submarine to “make the small change”) and strategically impractical. Scotland has vowed not to want any nuclear warheads, but it does have their only practical dock. Will England “hire” the facilities in Scotland, will it continue to own them, or will it seek a second-best location? Nobody knows, but fiscally this represents a substantial cost.

Among chief “intangible” assets that are taxed – and therefore sources of “implicit tax revenue” – we can safely include the North Sea deposits of fossil fuels. This is a complicated matter (as it was largely non-Scottish companies that developed the fields), but thankfully (for the UK) and unfortunately (for Scotland), the remaining stock is dwindling very fast indeed. As most of it is natural gas whose prices are plummeting world-wide with the onset of fracking, it may actually become a moot issue in terms of fiscal division (though the question of post-production liability for environmental scrapping will survive).

The one problematic issue is whether a central bank is a “governmental asset” to be divided, especially one with such complex history and status as the Bank of England.

Are currency and central bank an asset?

Presumably if the UK still had gold standard, it would merely divide up the gold (and the buildings) and voila, the currency would be split. The gold (and currency reserves) would still have to be split in case of independence (as they were in Czechoslovakia), but as there is no real link between those reserves and the currency, that by itself will not split the currency.

The process of splitting circulating cash is a fascinating one, but as it has little to do with fiscal issues, we will not consider it here.

But the pro-independence Scots argue that the pound itself is an asset, and therefore the currency with all its good name and reputation (as opposed to actual cash or bank deposits) may be declared “unsplittable” and continue to serve Scotland as well.
Of course, under normal circumstances a currency and its issuer are not a fiscal asset; central banks are clearly separated from governments and are formally independent (though they do buckle to political pressure at times).

But the Bank of England is arguably different, much more connected to fiscal policy and thus partly an “asset”.
• Compared to most other (European) central banks it has more fiscally-connected roots, having been originally established specifically to “service the sovereign’s debt”.
• In more modern history, right up to the event of New Labour, it was for all intents and purposes a “sub-branch” of the Chancellor’s office (Ministry of Finance) and at least informal gentlemanly influence continues.
• UK Banks purchase new notes from the Bank of England, Scottish banks even have to as much Sterling as the banknotes they issue! (There are special one-million-pound banknotes for that.) The Bank of England invests this money, and any profit made from it (less the cost of printing new notes) is handed over to the government. This is called seigniorage, effectively taxed at 100% by the Treasury.

So the Bank of England is at least to some extent indeed a “taxable asset”. In fiscal year 2012-3, for example, this amounted to £517 million. In other words, about one pound in one thousand of government revenue; perhaps a sufficiently small proportion not to pose a problem for potential negotiations.

But there is a larger point. Even though the Bank does yield some revenue to the Westminster government and parts of the Bank’s tangible assets may be given over to Scotland, the pound itself cannot be split. Furthermore, its reputation (something that the Scots are hoping for) is largely dictated not only by actions of its central bank, but especially nowadays also by the potential “fiscal backing” of its sovereign government. A pound partly co-backed by two independent fiscal policies is just not going to be the same pound that the Scots are now hoping for. Especially given the open plans of an independent Scottish government to pursue a much more generous and therefore potentially reckless fiscal policy.