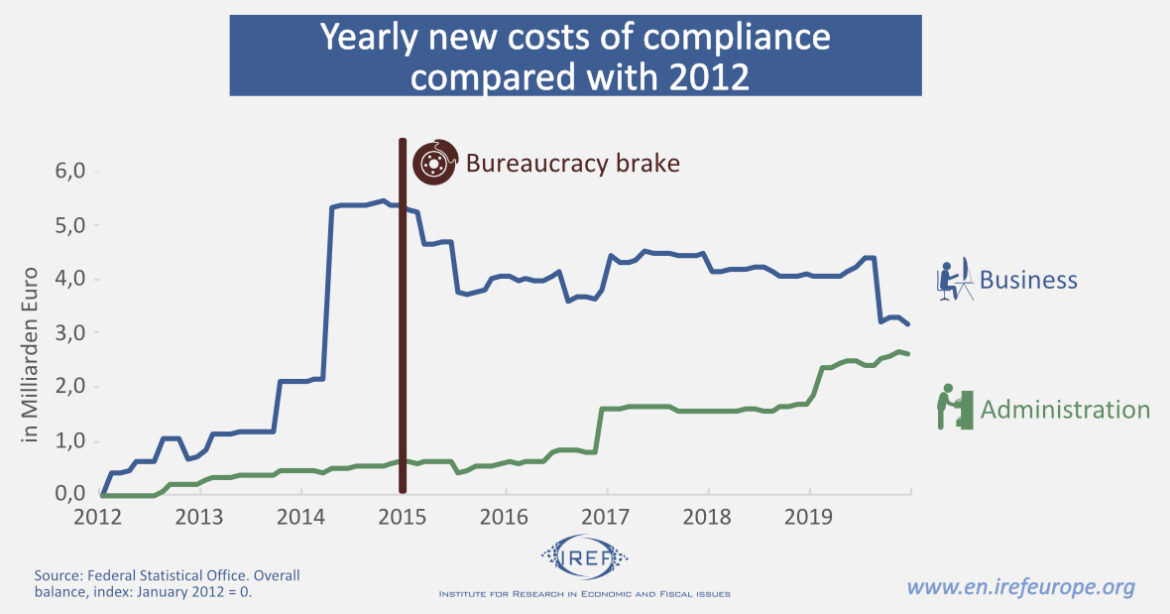 Germany introduced the so-called ‘bureaucracy brake’ in January 2015. Whenever new legislation is passed, the ‘one-in-one-out’ principle applies: it obliges the bureaucracy to eliminate old regulation whenever new rules are introduced, to avoid that that regulatory layers multiply and the burden for businesses increases. Since 2015, bureaucratic requirements actually decreased, and shows the German government does intend to cut red tape. Yet, it could do more. For example, the “bureaucracy brake” does not apply to EU guidelines and regulations; it ignores the cost of changing the rules; and leaves the size of the bureaucratic apparatus untouched.

The one-in-one-out rule means that all additional bureaucracy imposed by a new federal law has to be offset by deleting other rules. Businesses should not face a net increase in bureaucratic duties and costs due to federal legislation. As a result, when new laws are introduced, existing laws with similar bureaucratic burdens for businesses must be scrapped.

The bureaucratic burden is measured by what it takes to comply with bureaucratic requirements. It includes narrowly defined bureaucracy costs, such as disclosure and documentation duties, and also the expenses necessary to adjust to the new legislation — for example – in regard to the replacement of the equipment and the training of the labour force. Such measures do not include broader effects, such as the repercussion on growth, prices and competitiveness, and barriers to entry.

Bureaucratic costs have decreased since 2015

When assessing the bureaucratic changes, the ministry in charge estimates whether the expected cost is below €100,000. If the answer is in the positive, the proposal goes to the Federal Statistical Office for an exact calculation. The National Regulatory Control Council then reviews the first estimates and checks for methodological comprehensiveness and plausibility.
The National Regulatory Control Council reports the monthly changes in bureaucratic costs since 2011, and they are published by the Federal Statistical Office since 2012.

As shown in the figure below, annual bureaucratic costs increased steadily between 2012 and 2015, and reached €5.4 billion before the introduction of the bureaucratic brake. They have been falling ever since, down to €2.2 billion by the end of 2019. 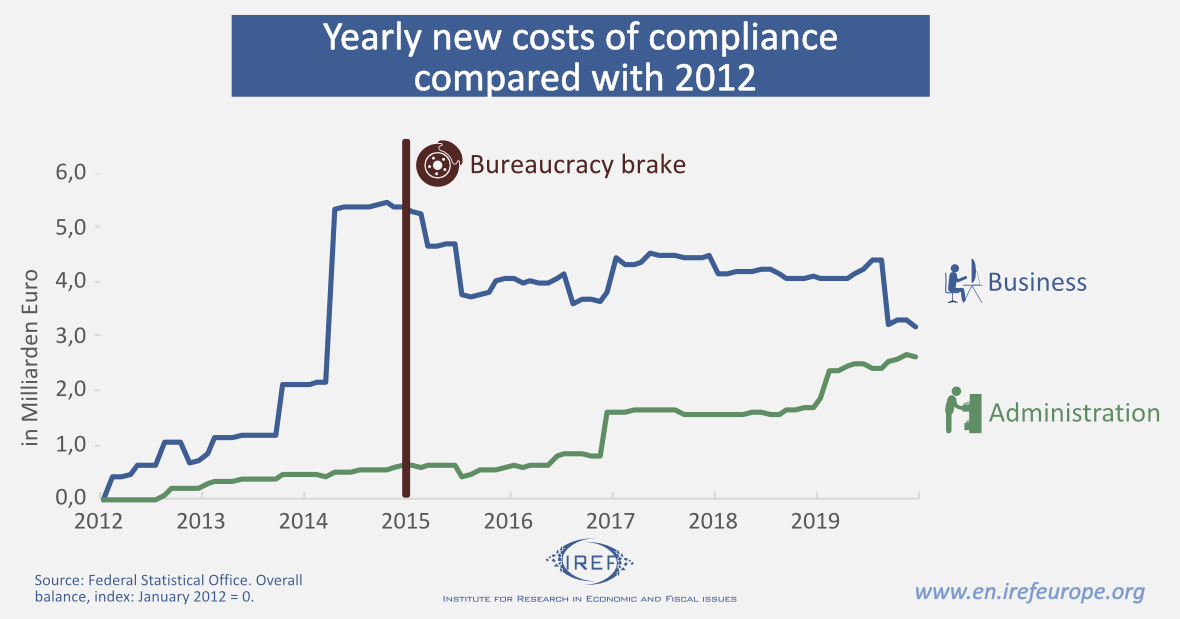 The bureaucracy brake has indeed had a mitigating impact on the bureaucracy burden of firms. However, between 2015 and 2019 the areas in which the bureaucracy is not subject to the one-in-one-out rule have caused an extra burden of about €2 billion. As mentioned earlier, these areas include the implementation of EU legislation, international treaties, and constitutional rulings. Legislation relating to safety, temporary measures and involving one-off costs are also excluded.

Since 2015, implementation of EU laws have caused an additional annual cost of more than €800 million for businesses, while the annual one-off costs have been about €1.2 billion. 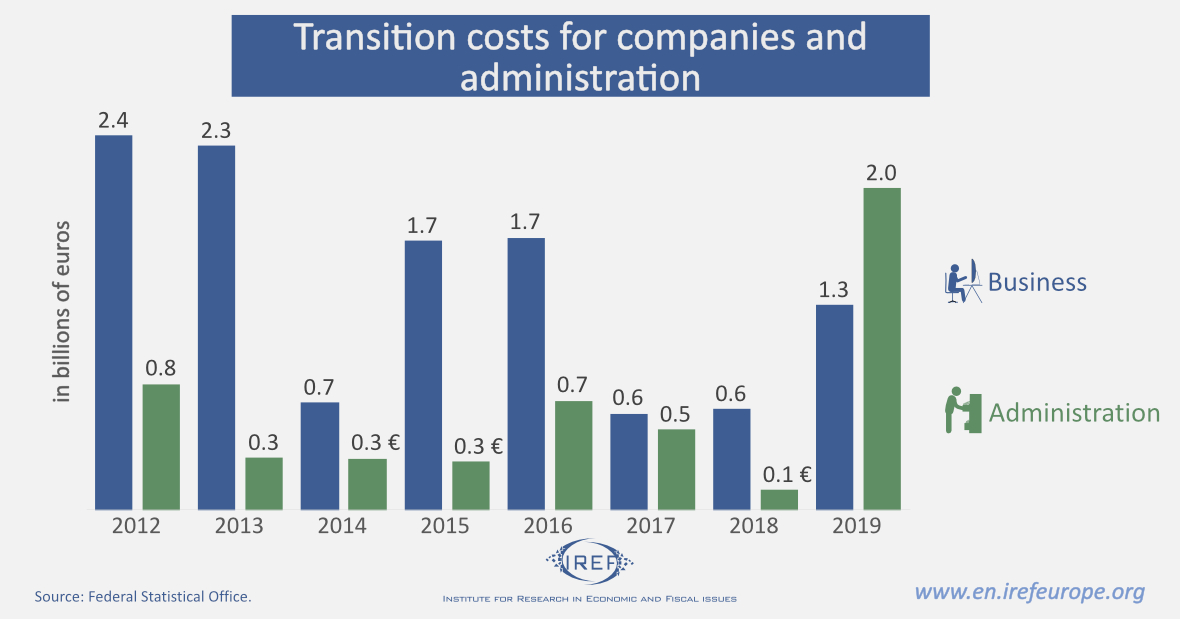 To conclude, not unlike what happened in other countries, the German one-in-one-out rule succeeded in containing the bureaucratic burden. However, significant exceptions limit its effectiveness. If the German government really wants to neutralise the “spontaneous” trend towards heavier and heavier bureaucratic costs, a more comprehensive application of the brake is desirable. Additional red tape caused by EU legislation or one-off compliance requirements should also be offset. The sooner, the better. 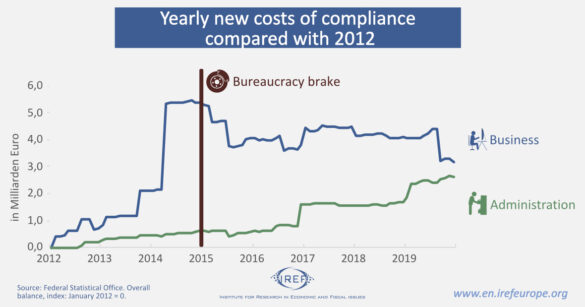 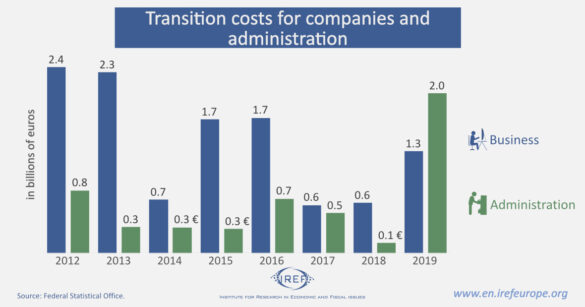