What defines a happy life is a very individual question. A look at the “World Happiness Report” still provides some clues on what makes humans happy: A long and healthy life, in relative wealth with family, reliable friends and self-determination. The conditions for this are again mainly given in countries which count as politically and economically free. Those are the countries in which people say they are happier with their lives.

Happiness in the World

For the “World Happiness Report” more than 1,000 people in over 150 countries were asked to gauge their living conditions on a scale from 1 to 10. Participants could award the highest score when they regarded their life as the best life possible. The average answer of the participants gives the index level for each country and is used as parameter for the aggregated satisfaction with their own lives. 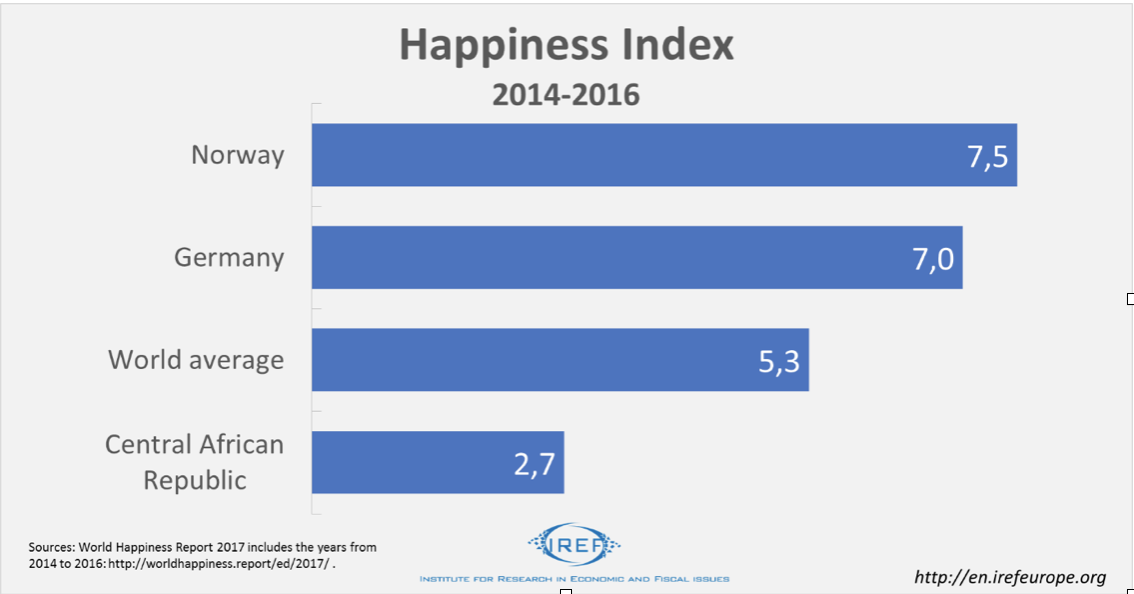 The unhappiest people are found to live in the Central African Republic. People living here give their living conditions just 3 points – more than 2 points less than the average world citizen. The study does not include all countries. Among those are countries such as North Korea, which would most likely far similarly bad or even worse.

Wealth and Friends: Crucial for Happiness

The scientists examined the impact of six key components on the level of happiness in the countries: Income, friends, health and life expectancy, self-determination, generosity and corruption. Among the included variables the results indicate that friends and a high income have the highest influence.

The reliability of Norwegian friends leads Norwegians to rate their life conditions at 1.5 points higher than people in the Central African Republic, who can count the least on their friends’ reliability worldwide.

To a similar extent the differences in the index values of countries can be explained by the different levels of income per capita. Among the analysed countries the Central African Republic exhibits the lowest GDP per capita. The happiest people, the Norwegians, rate their life conditions compared to the Central African Republic by 1.6 points higher just because of the significantly higher GDP per capita alone.

Economic wealth and good friends seem to be important elements for a happy life. Both cannot be directly induced by the state. Hence, attempts of states to make their citizens better people have regularly failed, just like attempts to create wealth by state-controlled economic activity.

However, by preserving economic and political freedom the state can create an environment that supports the creation of material wealth as well as the required trust. It is therefore not surprising that economic as well as political freedom of countries are positively correlated with the level of happiness of their citizens.

The Economic Freedom Index of the Canadian Fraser Institute captures how big of a role the state plays, how reliable the justice system works and how heavily state regulations limit the freedom of choice of the people. A higher value means more economic freedom.

The data of the Fraser institute and the World Happiness Report show a positive correlation of satisfaction with life conditions and the economic freedom of people. Hence, people in the happiest country in the world, Norway, experience very little regulations of their economic activities. On the other hand, people living in economically relatively unfree countries such as Venezuela or Burundi are also relatively unhappy.

Free elections, political pluralism and political participation, freedom of speech and religion, rule of law as well as individual rights form the political foundations of a functioning society. These aspects feed into the annual evaluation of political freedom in 195 countries by the think tank Freedomhouse. 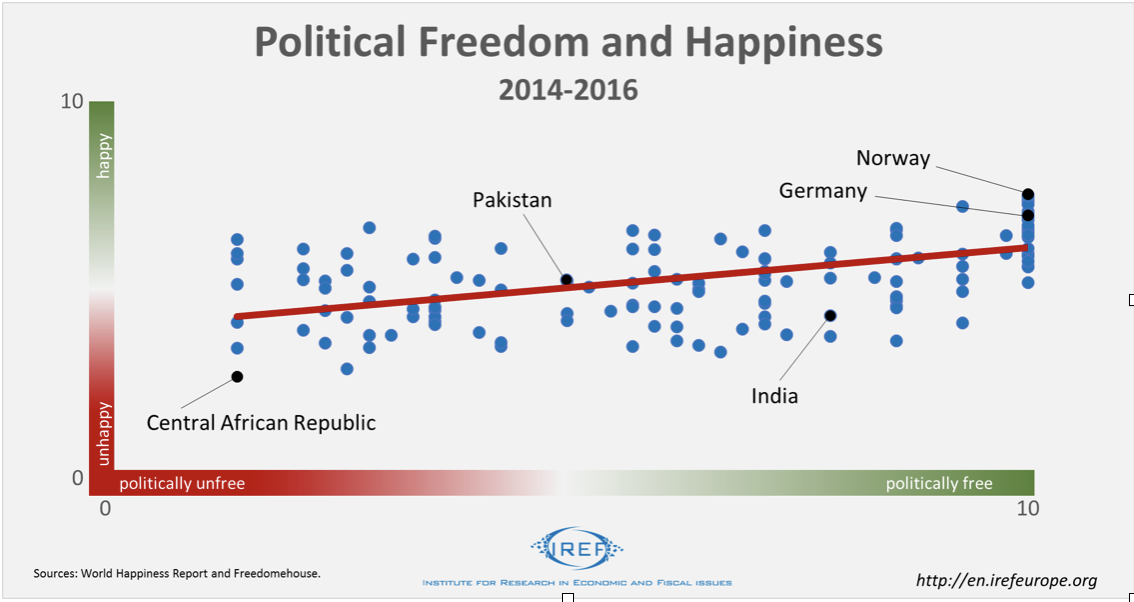 Data for the years 2014 to 2016 shows that people who leave in politically free countries are happier. Germany and Norway are both in the top group for both categories of this study. The middle range includes countries such as India and Pakistan. People in Sudan are relatively unhappy and heavily restricted in their political rights.

The presented results from the “World Happiness Report” are based on the latest data from the years of 2014 to 2016. The comparison with the previous survey from 2005 to 2007 gives rise to optimism: In more countries people got happier than unhappier. While the happiness index decreased in only 38 countries, it increased in 58 countries. In the other countries there was no significant change.

The largest “happiness decrease” is found in Venezuela. The biggest winners are mostly relatively poor countries.

In combination the market-oriented economy and democracy do not only form the most effective conditions for material wealth and political participation, but also for a happy life. A life in an open society, economically and politically free, offers people the opportunity to be the masters of their own fate. Fortunately, this is true for more people than ever before, even though there still many humans who have to suffer from the absence of freedom. 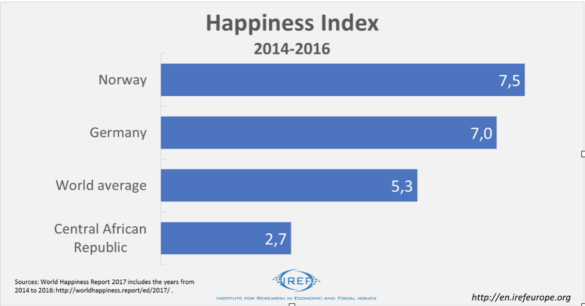 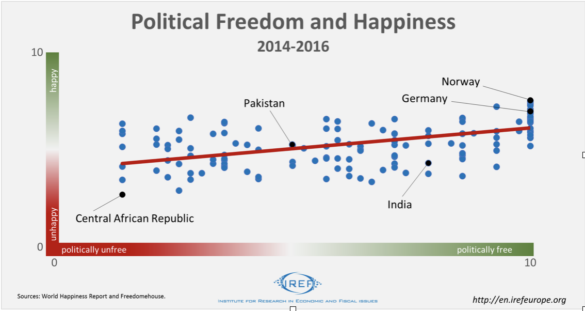