Copyright 2022 IREF Europe
Home » Freedom of the Press and the Rule of Law: A Necessary Marriage
Online Articles 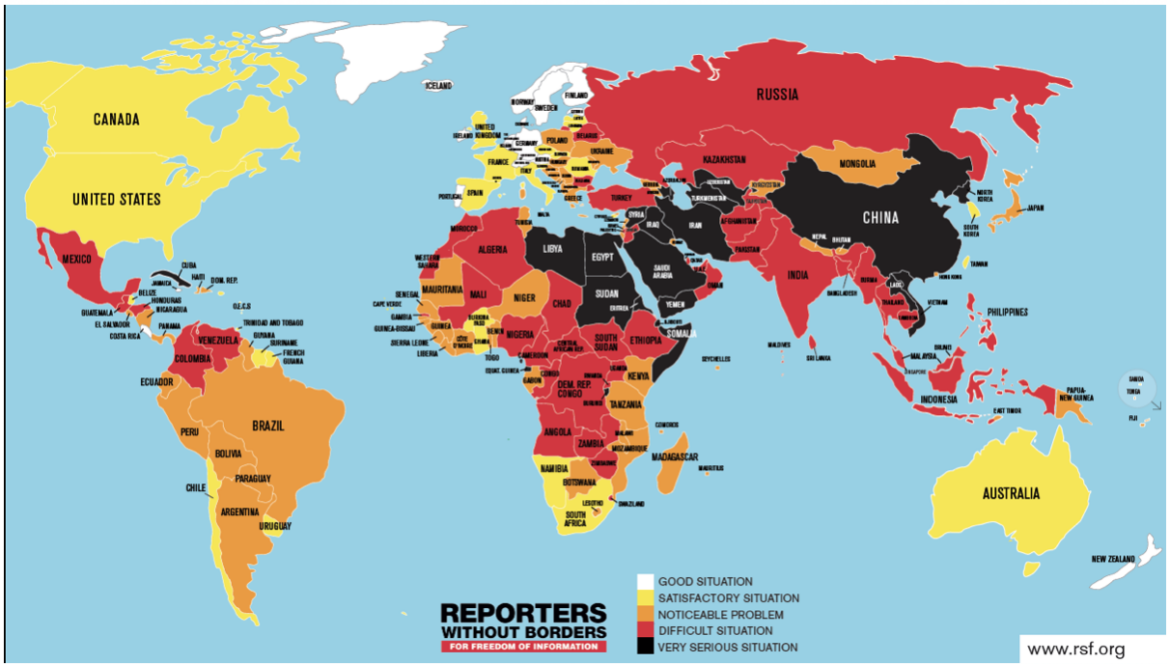 Press freedom in Europe is more fragile now than at any time since the end of the Cold War». This pessimistic and rather surprising statement appears at the beginning of the 2019 Annual Report published by the Council of Europe, which is the continent’s leading human rights organisation, including 47 member states (28 of which belong to the European Union).

According to the Report, journalists increasingly face obstruction, opposition and violence. In 2018, 140 serious accidents occurred in 32 Council of Europe member states: 35 accidents (25%) qualify as assaults on the physical safety and integrity of the journalists, 17 (12%) as detention and imprisonment, and 34 (24%) as harassment and intimidation. 51 cases (37%) are listed as acts having alarming effects on media freedom. Overall, the number of alerts concerning severe threats to the lives of journalists has dramatically increased since 2015, when the first Report was circulated. In addition, beside the extreme types of violence (in 2018, journalists were killed in Turkey, Bulgaria and the Russian Federation) a new tendency is emerging: elected officials engage in verbal aggression against individual journalists in many member states, especially when elections approach.

Besides providing an overview of the recent threats to the freedom of the press (and of the media in general), the Annual Report also focuses on specific countries. These include Turkey, where journalists frequently run the risk of being jailed; Russia and Hungary, where a large share of the media are owned or controlled by the government; and Italy, where complaints by the journalists have recently increased dramatically.

Figure 1 describes the freedom-of-the-press index worldwide, as summarised by “Reporters without Borders”, an independent NGO based in Paris. It operates as an advisor to the United Nations, UNESCO and the Council of Europe.

Reporters without Borders has branches in ten cities worldwide, and its network of correspondents in 130 countries enables it to conduct political advocacy on issues relating to freedom of information and freedom of the press, to mobilize support and to challenge governments. The index considers the level of pluralism, the independence of the media, the degree of transparency, the quality of the infrastructure that supports the production of news and information, and several other variables.

The figure is self-explanatory: the situation is rather satisfactory in the Western World (Continental Europe, North-America, Japan, S.Korea and Australia). It also shows that there are plenty of problematic areas. 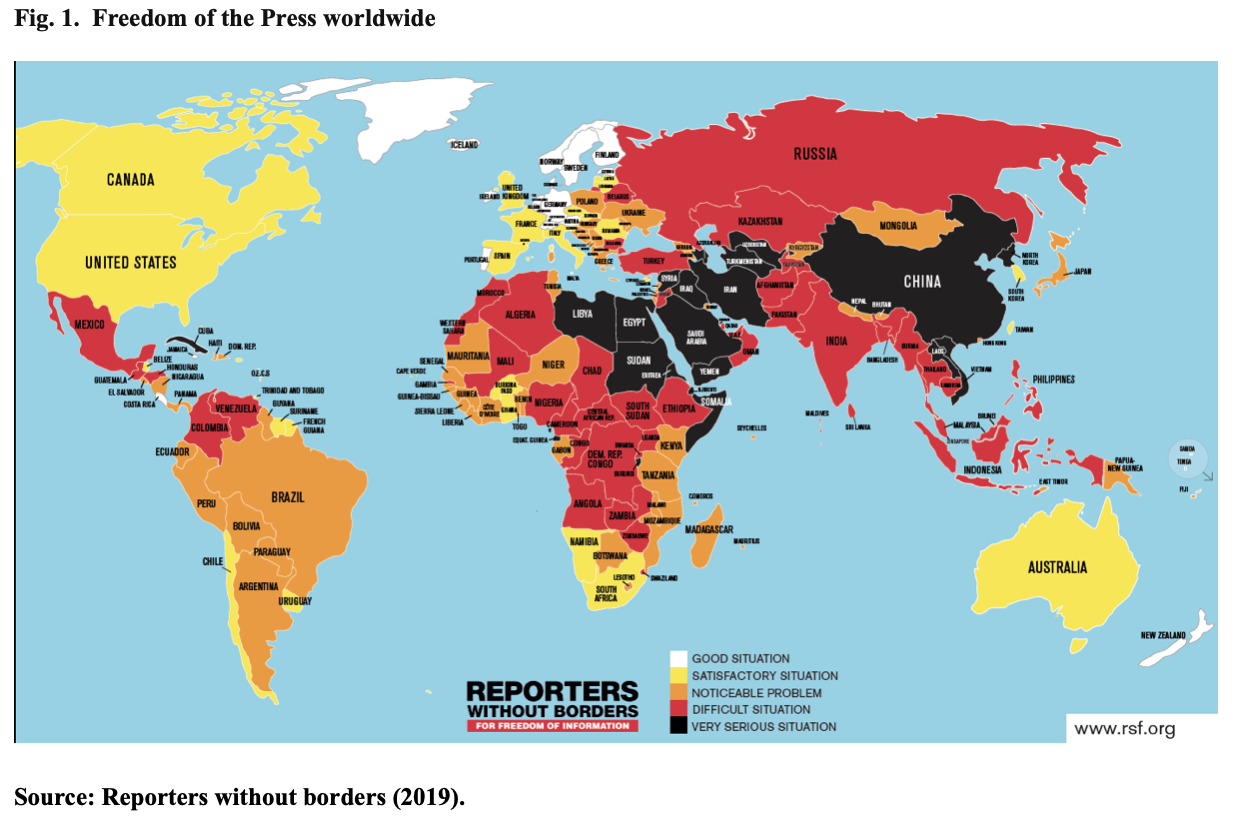 What Enhances Freedom of the Press?

In order to shed light on the variables that affect the freedom of the press, we have examined the relationship of this variable with some economic indicators and various indices that describe the quality of the institutional setting for each country. Our data come from the Council of Europe, Reporters without Borders, and the Heritage Foundation.

The data show that the freedom of the press is strongly correlated with the protection of property rights (Fig 2a), with the transparency of government (Fig. 2b), with the freedom to invest (Fig. 2c) and, more generally, with economic freedom (Fig. 2d). 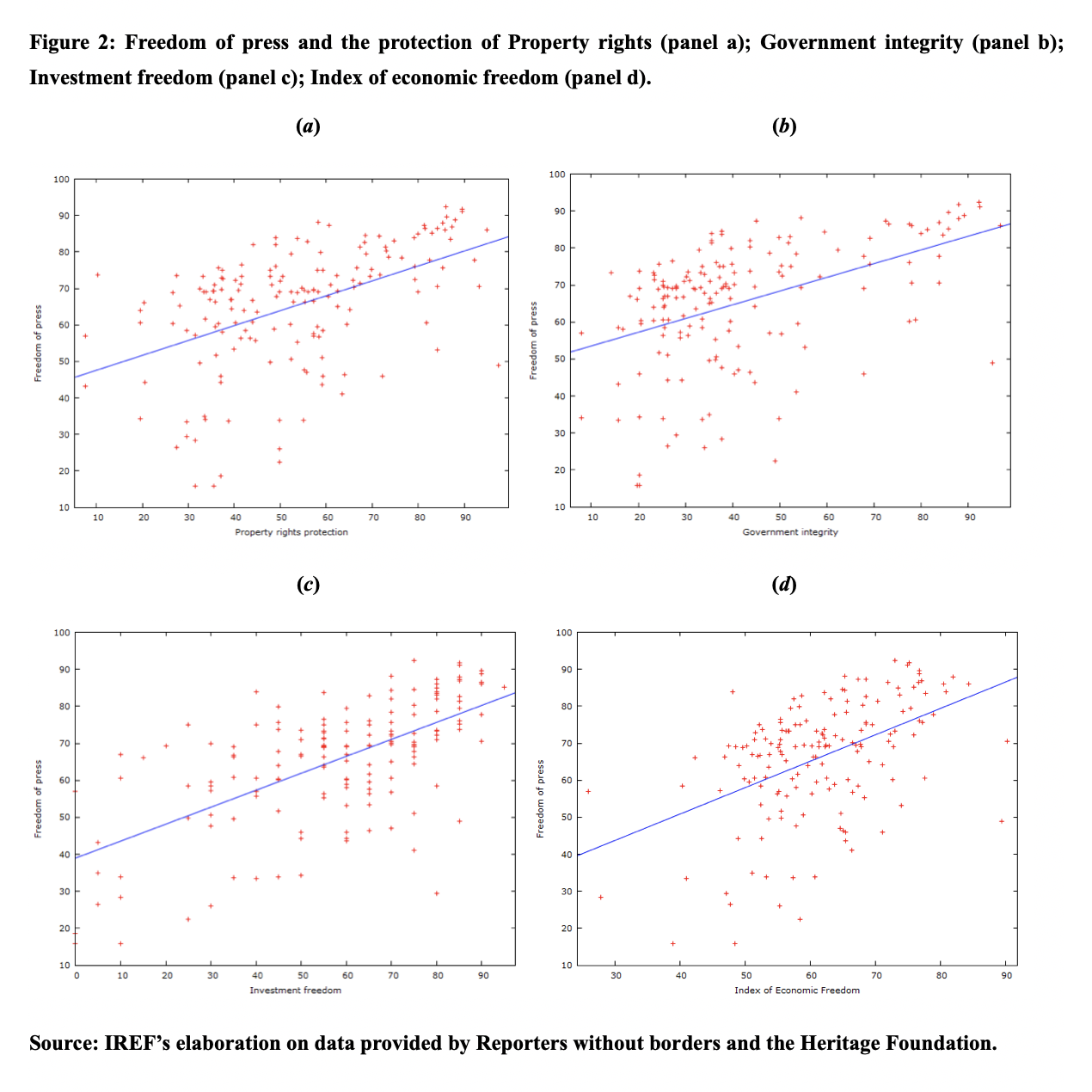 As the figure below shows (Fig 3), the Press Freedom Index is also positively (and weakly) correlated with GDP per capita. 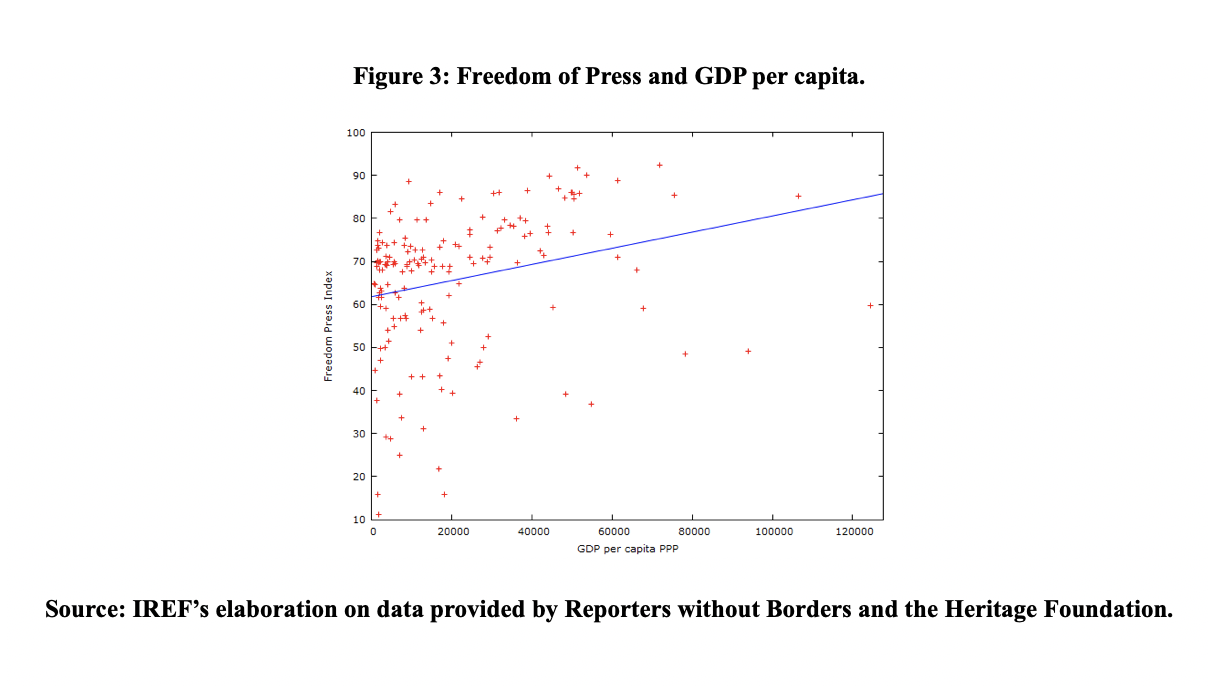 In particular, if one considers the correlations between the freedom of the press and all the relevant dimensions of the Index of Economic Freedom at the same time (using what is called multiple regression analysis), it turns out that Government Integrity is the main requirement for a free press, a requirement that is more easily respected in business oriented contexts.

At the same time, it appears that if one controls for the other variables that capture the quality of the institutional setting at the country level, GDP per capita does not significantly affect the freedom of the press. This is rather surprising, since we usually expect that economic development enhances political freedom and tolerance. This intuition is not actually wrong, for economic development usually goes hand in hand with government integrity, respect of property rights and the rule of law. Nonetheless, the data show that many dimensions related to economic freedom (as the respect of property rights for example) are actually key in predicting satisfactory levels of the freedom of the press, and that if these dimensions are taken into account explicitly, a change in GDP per capita makes no difference to the Press Freedom Index.

The upshot is that the emergence and persistence of the freedom of the press is more probable wherever people succeed in limiting the abuse of governmental power. Not surprisingly, a safer environment for journalists is also a more attractive world for entrepreneurs and investors. 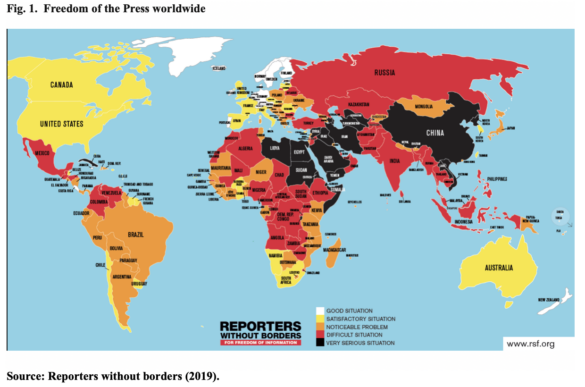 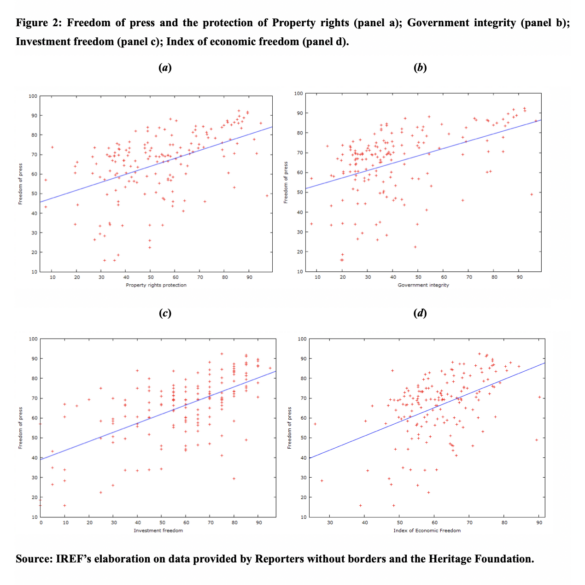 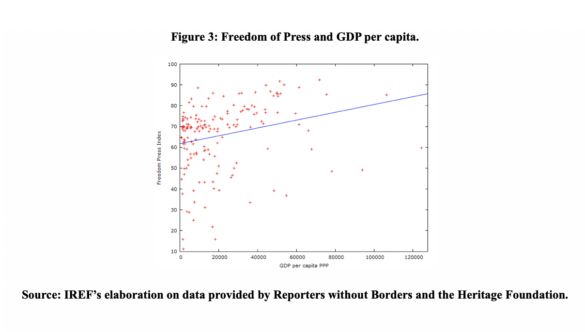