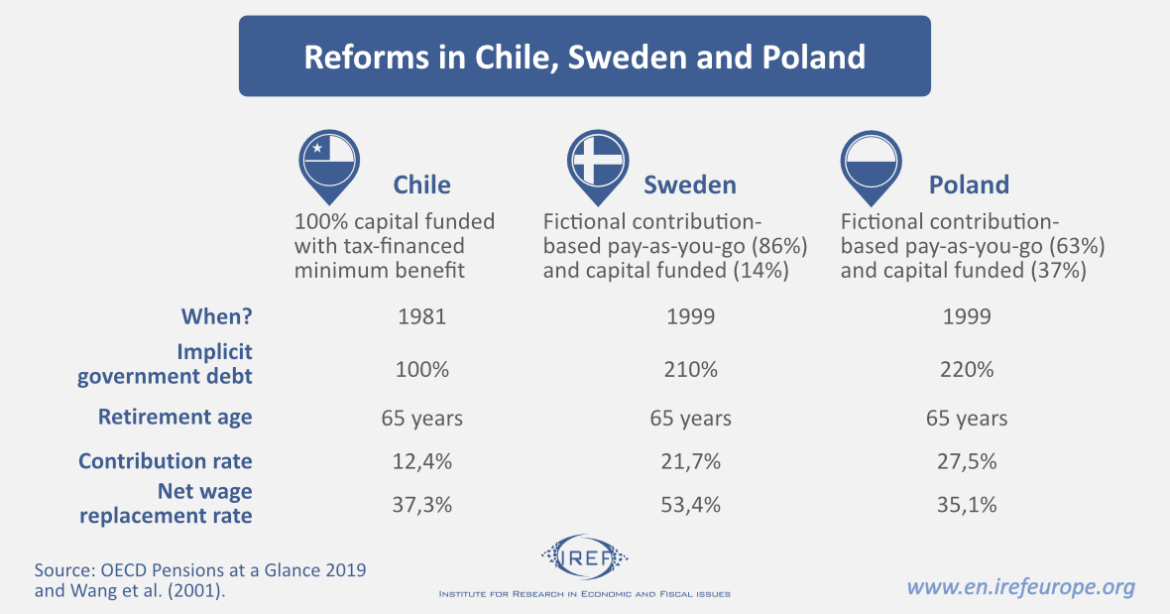 In many countries, pay-as-you-go pension systems are under increasing pressure due to demographic changes. This explains why more and more opinion makers recommend switching to a funded system on top of the current voluntary schemes. During the transition period, however, the existing unfunded pension entitlements would still have to be paid out, while employees already start building a capital stock. This is commonly known as the ‘double burden’, and explains why resistance to change remains significant.

It may thus be useful to consider what happened in countries that experienced transition in relatively recent times by resorting to debt (Chile), accumulated surplus (Sweden), and privatisation gains (Poland).

Although some countries have encouraged funded voluntary additional insurance while keeping pay-as-you-go schemes in place, numerous countries in Latin America, Eastern Europe, and Asia have been more ambitious, and moved towards fully funded systems. Chile began in 1981, and in 2008 30 countries had funded public pension schemes. Sweden, Poland and the UK were among them. 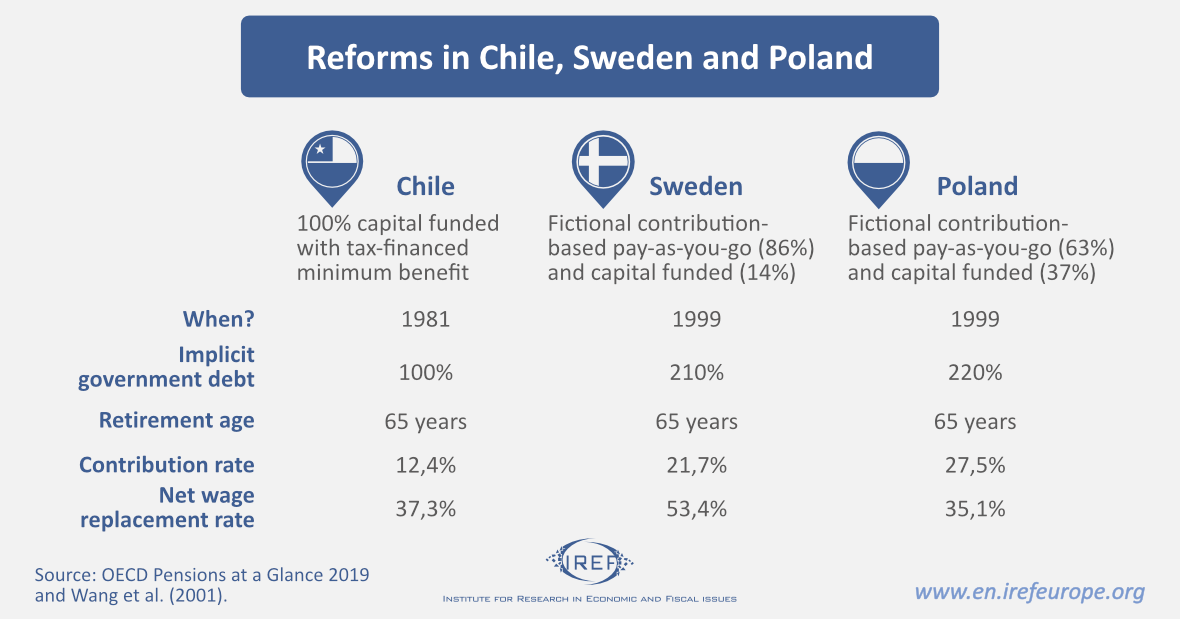 By and large, there are three ways of funding the additional cost of moving from unfunded to funded pension schemes. First, existing claims within the pay-as-you-go scheme can be cut, so as to reduce the amount of contributions. The resources made available are then devoted to building the stock of capital. Second, governments can resort to higher taxation or higher indebtedness. Third, one-off resources can be generated by privatisation programmes. Aside from the funding sources, the speed of transition also affects how costs are distributed among individuals and generations.

Reform content. Chile engaged in pension reform in 1981. The pre-1981 unfunded scheme was replaced by a system of individual accounts into which all employees were required to pay 10% (today: 12.4%) of their salaries. Until 2008, participation was voluntary for the self-employed. These accounts are managed by private, regulated, and freely selectable investment trusts. The accumulated assets are usually paid out on a monthly basis upon reaching pension age. After 2008, the system also offers a tax-funded guaranteed minimum pension for those unable to accumulate enough capital.

Transition costs. Citizens who had already accumulated claims within the unfunded system in 1981 were given the choice whether to switch to a funded scheme or remain in the pay-as-you-go scheme. The cost of transforming one’s implicit credit into real capital was covered by the government budget. Of course, the state kept funding the pensions of those who remained in the pay-as-you-go-system. In 1981, the implicit government debt due to the unfunded system amounted to about 100% of GDP. This burden is expected to go to zero in 2045.

Funding and responses. The Chilean government planned to fund the initial transition costs through privatisation gains and budgetary rigour. However, since 1982, the annual costs of transition – 5% of GDP — are funded predominantly through government debt. Despite some weaknesses – relatively high administrative costs, concentration of the insurance industry, low returns during the financial crisis and relatively low pension levels – Chile’s pension reform inspired similar approaches in Peru (1993), Columbia and Argentina (1994), Uruguay (1996), Bolivia and Mexico (1997) and El Salvador (1998).

Sweden: funding thanks to the budget surpluses collected over the previous decades

Reform content. Sweden reformed its pension system between 1994 and 1999. The pay-as-you-go system in place since 1913 was transformed into the first Notional Defined Contributions system (NDC) globally, to which employees pay 16% of their wages. While the NDC operates almost like the traditional unfunded system, claims now depend on the wage rate, interest rates and life expectancy. Sweden also established a funded pillar based on 2.5% of the employees’ wages. The individual accounts can be administrated through private investment trusts of one’s own choice. The Swedish government also provides a default portfolio.

Transition costs. Transition arrangements apply to citizens born between 1938 and 1954: their pensions are paid partly through the previous pay-as-you-go scheme and partly through the NDC scheme. The implicit government debt outstanding in the mid-Nineties was 210% of GDP, and the state funded the ‘double burden’ through the so-called “buffer fund”.

Funding and responses. The ‘buffer fund’ is responsible for the 3% difference between pension contributions and pension payments. The Swedish model is characterised by a consensus-oriented process, low administrative costs and a successful mix of basic coverage and private competition. It is often considered exemplary.

Reform content. Inspired by Chile and Sweden, Poland’s government initiated a profound transformation of the pension system in 1999. Like in Sweden, public pensions now consist of a pay-as-you-go component, NDC-oriented elements, and a funded pillar. The latter was initially fed by 7.3% of pre-tax earnings, while 12.2% went into the NDC scheme. As a result, the level of contributions (19.5%) remained the same. However, due to the weak performance of the funded public scheme and the rapidly growing government debt, in 2011 the funded pillar was reduced to 2.3%. It has grown slightly in recent times, but the Polish government continues to put more emphasis on a mix of public pay-as-you-go and voluntary private provisions.

Transition costs. When the reform was initiated, the implicit government debt resulting from the pay-as-you-go system amounted to about 220% of GDP. However, the mixed components that characterise the Polish context ensure that a much lower percentage will become explicit.

Funding and responses. Initially, the ‘double burden’ was supposed to be funded entirely through privatisations. Indeed, until 2010, roughly two thirds of the transition costs were paid this way. However, the Polish government did not expect any substantial revenue from privatisation in later years. To prevent debt from spiralling, therefore, the government decided to dismantle the funded pillar of the public system. A similar path was followed by Estonia, Latvia and Lithuania (2009), and also by other Eastern European countries. The bottom line is that the Polish experiment was not a success story: the Polish authorities overestimated the revenues from privatisation, ran into significant operational problems, and met high administrative costs. Moreover, they allowed access to only 14 private pension trusts. Heavy regulation regarding investments did the rest.

The experiences of Chile, Sweden and Poland offer three lessons. First, it is clear that gradual transition is a must. The partial failure of the Polish reform was due to the steep rise in public debt generated by the ill-timed programme. The success of Chile’s shock therapy approach can be traced back to Pinochet’s dictatorship and relatively low levels of contributions and coverage; these features are uncommon in the European environment.

Second, access to capital markets should not be constrained. Sweden’s citizens can invest their assets in over 100 competing pension trusts, including five public trusts which offer attractive and simple financial products. In Chile and Poland, the spectrum of public and private trusts is significantly narrower, which leads to high administrative costs and low returns.

Third, Chile, Sweden and Poland illustrate that a sound plan for funding the transition must be in place upon initiating the reforms. To prevent later backpedalling like in Poland, transition costs and funding sources should be calculated as transparently as possible. As opposed to Sweden, most European countries cannot count on previously accumulated surpluses. Hence, reforms must necessarily rely on government debt, possibly supplemented by the revenues generated by extensive privatisation programmes. 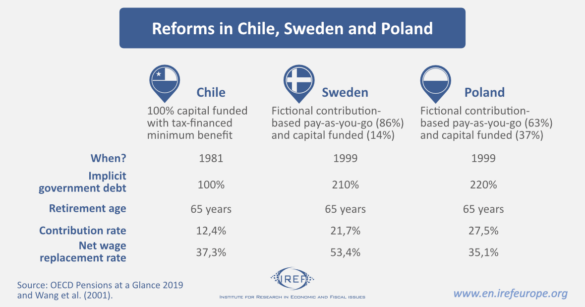 Is temperature adversely related to economic growth? Evidence on the short-run and the long-run links from sub-national data