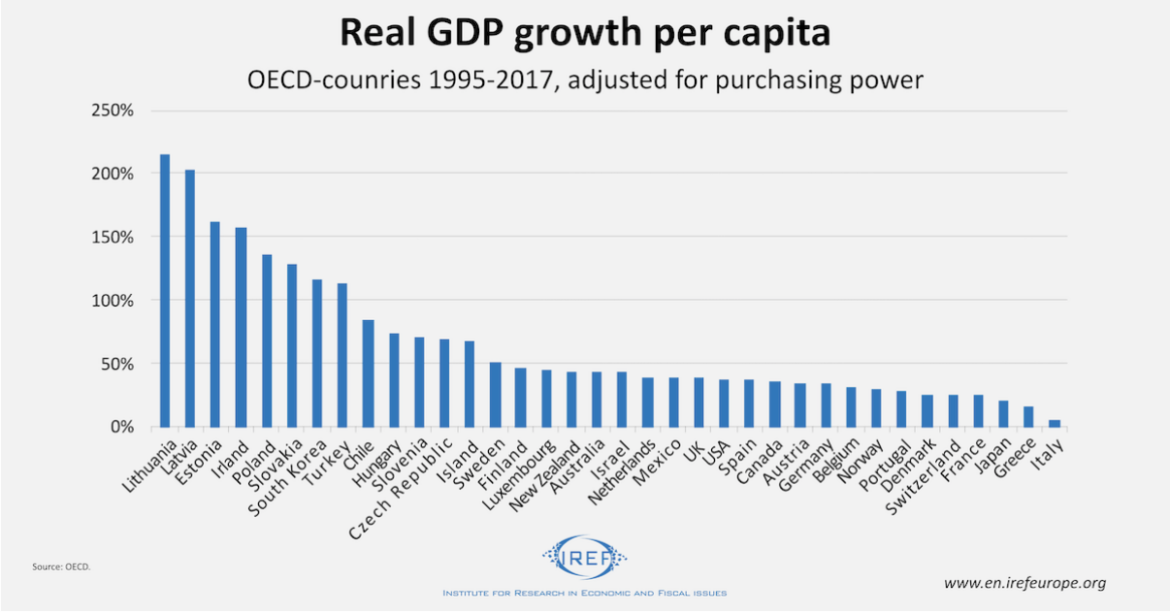 Crises, shortages, and bad news are often dominating daily politics and media coverage. Under the radar of politics and media, however, highly desirable developments have been taking place. Among those is growing GDP per capita across the OECD since the 1990s. The strong economic growth in the Eastern European countries is certainly good news. Despite the recent slowdown, growth in the advanced economies is not negligible. Despite questionable policymaking, there have been significant long-term economic developments.

We have a pessimistic tendency regarding the state of humankind. On the gapminder.org website everyone can form their own misperceptions.
In recent times, the media has emphasised events characterised by high emotional impact such as Brexit, recent American elections, the financial crisis, and mass migration. This is more than justified and understandable, however, this also distorts the view of the bigger picture. It has made us forget about the generally positive long-term economic developments that have taken place in the past 22 years. 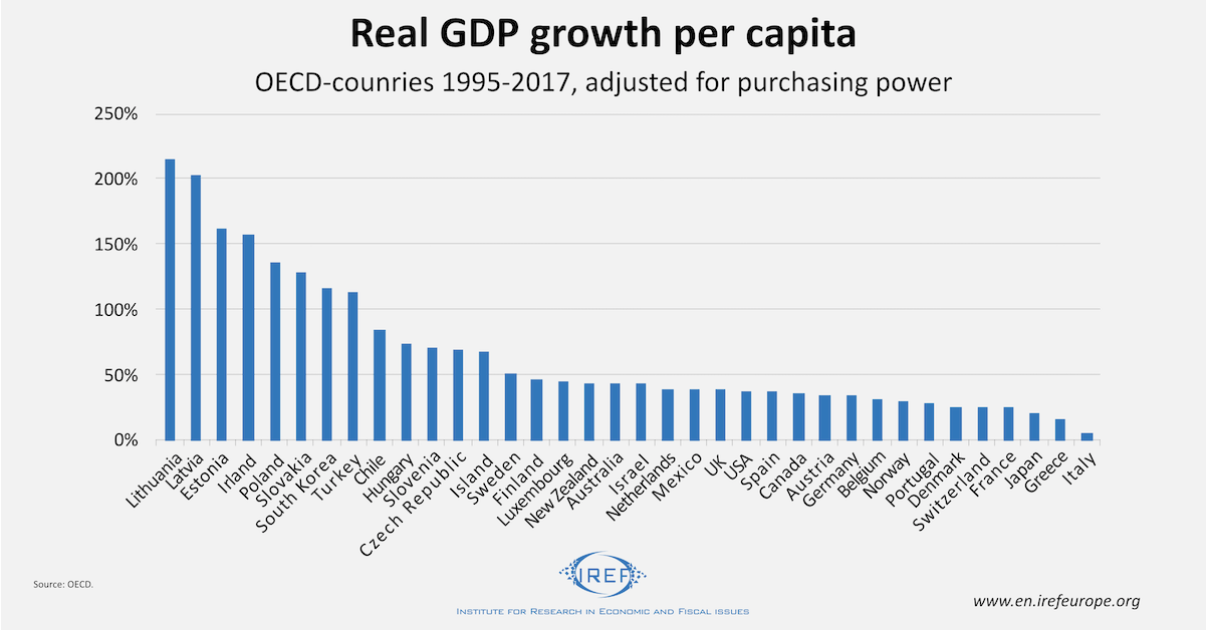 As the graph above shows, inflation and purchasing-power-adjusted GDP per capita in OECD countries increased on average by 66 percent between 1995 to 2017. The median growth rate is 44 percent. This means that half of the countries saw their GDP per capita rise by more than 44 percent, which corresponds to an average an annual growth rate of 1.7%.

None of the countries experienced a decrease in GDP per capita. All Eastern European countries grew particularly fast (GDP per capita grew by more than 150 percent), first and foremost Lithuania, Latvia and Estonia, all of which are ranked in the Top 20 of the Economic Freedom of the World Index. In Estonia and Lithuania, GDP per capita in 2017 was even higher than that of Greece, which in 1995 had a GDP per capita twice as high as that presented by the two Baltic countries. Poland, Slovakia, Hungary, Slovenia and the Czech Republic also featured considerably higher growth rates than most other OECD countries.

By contrast, the past two decades have been rather disappointing for Italy and Greece, still in critical conditions today. GDP per capita also grew little in Japan, and also in France, Switzerland or Denmark. In all these countries, however, GDP per capita in 2017 exceeded the level of 2008, when the Global Financial Crisis began.

Absolute GDP Per Capita: Eastern Europe is Catching Up

In absolute terms, the 2017 GDP per capita in the high growth countries of Latvia, Estonia and Lithuania were still at substantially lower levels than those in countries such as Japan, France, Germany or Denmark – not to mention Switzerland or Norway. 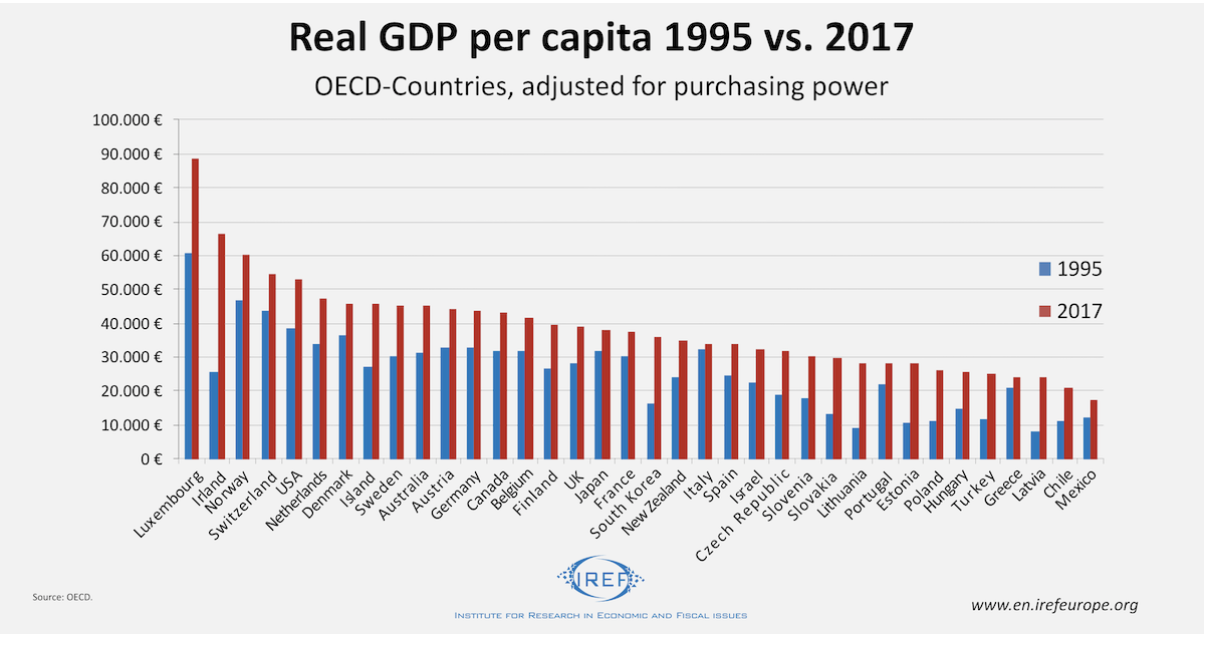 Yet, several countries belonging to the former communist bloc are indeed catching up. In the Czech Republic, Slovakia and Lithuania in 2017 GDP per capita was already higher than in Portugal and Greece. In face of the more positive outlook for Eastern Europe than in Southern Europe, it is possible that GDP per capita in some Eastern European countries will also overtake Italy or Spain before long. 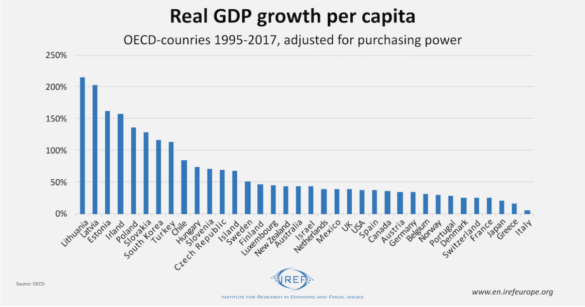 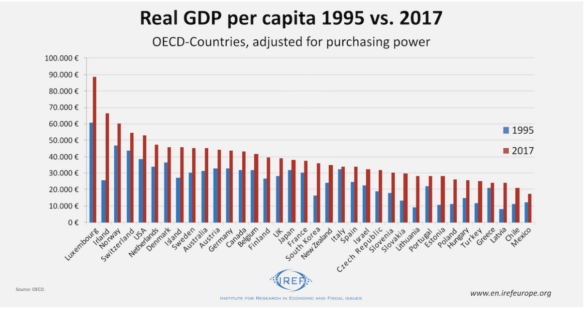