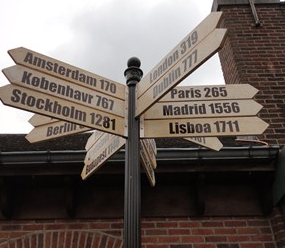 Voter turnout at the latest European Parliament election is much debated. Many countries saw further drops compared to last EP elections in 2009, fuelling concerns about widening democratic deficit. Beyond the general facade, IREF discovers an interesting geographic pattern in the turnout numbers.

As soon polling stations closed in Italy an hour before midnight CEST on Sunday 25th May, results of the latest European Parliament elections started to stream in from various parts of the continent. Some within minutes, some took until Tuesday. It was refreshing to see that the method of counting is not harmonized yet. Countries voted on different days throughout a four-day window. Some counted votes immediately on the election day and then kept the results secret until polls closed in Italy. Others kept uncounted European ballots under lock and key and only started counting them on after Sunday night.. The practice differed even within individual countries: in the UK, for instance, the following Monday was a holiday which some election commissions chose to observe (Northern Ireland, the Hebrides), postponing the declaration until the Tuesday.
Once the results started to come out, commentators started their talk of “earthquakes” of Eurosceptic votes. But before then there was a short window when the talk was of the low turnout rates experienced in some countries. (Unlike the results, turnout rates were legally reportable). While there was an overall slight increase in turnout overall, the Czech Republic’s 18% turnout, for example, usually earned more than just one exclamation mark. And it wasn’t even the lowest turnout in Europe!

IREF has analysed recently the gap between countries’ usual participation in national and European elections. On average the “European Turnout Deficit” has been steady for a long time at around 20 percentage points. (The average would be even higher were it not for a few countries with compulsory voting.)

There are two possibilities of the relationship between the European Parliament’s fiscal powers and low turnout:
• Either the European voters are hyper-rational and vote less precisely in appreciation of the marginal way in which the only European elected institution can affect their taxes and public spending.
• Or voters’ lack of interest is unrelated to lack of EP’s fiscal powers.

Which one it is will be increasingly important in the coming years, since it seems that the onward march towards fiscal harmonisation in Europe is unstoppable. If the first option is correct, at least there is hope that taxpayers’ representation will become more representative when it starts to matter. If the latter is the case and fiscal powers increase just as turnout continues to decrease, we could be in for serious trouble.

So how did turnout turn out in the latest elections in individual countries? Just as in the past, turnout rates differed greatly from country to country. Turnout rates by themselves say little. The best comparison we can make is to the previous European election of 2009, which was already taking place amid the financial turmoil.
IREF has calculated the relative increase or decrease in current voter turnout since the last election However, unlike most media which simply subtract one turnout from the other, we look at the proportional movements of the participating electorate. We ask what proportion of the 2009 voting electorate stayed now at home, or what proportion came now that hadn’t come then. This gives a clearer picture since media’s reported 13 percentage point difference would mean a doubling of turnout in Slovakia but in France it would be almost unnoticeable. 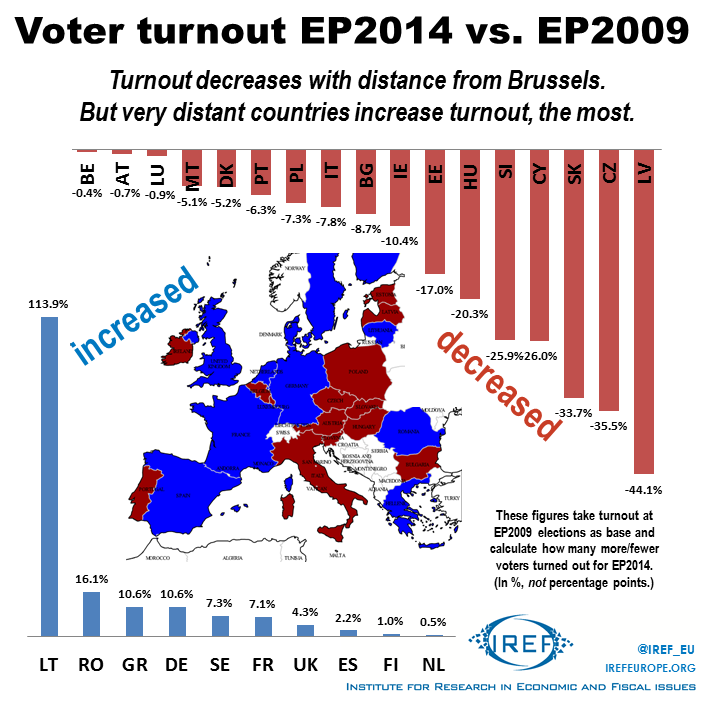 Firstly, we notice that turnout decrease was much more frequent than increase.

Secondly, the rates of increase are relatively small and completely overshadowed by the one outlier of Lithuania. The rates of decrease, on the other hand, are over 20% in half a dozen countries.

Thirdly, and perhaps most interestingly, the geographic distribution of increases and decreases seems far from random. As if the further you are from Brussels, the more likely you are to have decreased your turnout since the last EP election (unless you are Belgium itself, of course, but Belgium does not really count since it has compulsory voting and the decrease was statistically insignificant). This seems to work in both easterly and westerly direction (PT, IE). The only exceptions to this rule are Greece, Romania and the aforementioned Lithuania. But these are very important exceptions since these three countries experienced the greatest increases in turnout. Nevertheless, a cheap interpretation lends itself – that the low turnout is dictated by the lack of interest in European issues, which the physical distance from “the capital” cannot help. That seems to be certainly the mainstream media interpretation.

There is of course another way of interpreting the geography. Perhaps what we are seeing in the red field is not the distant countries but the recipients of most of EU’s non-agricultural aid: structural funds in most post-communist countries, bank bailouts in Italy, Portugal and Ireland. The story fits almost too perfectly (safe for the three exceptions mentioned).

It’s as if those who are, according to the official EU rhetoric, supposed to benefit the most show the least interest in the EU project. That would certainly be surprising to most casual observers. 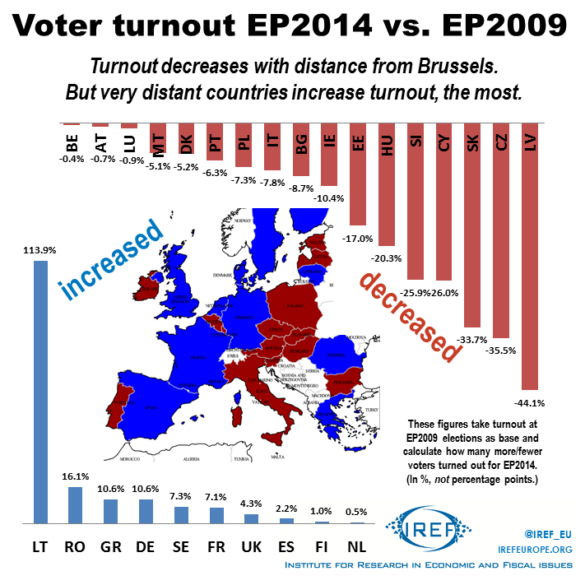