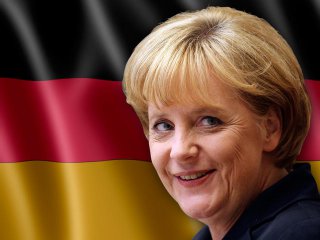 Reforming is a path for reelection: German Chancellor Angela Merkel privatized, deregulated, capitalized. She did not reflate nor accepted deficits : she reduced taxes. For sure, there are some lessons to learn for France.

In which country are voters against the rise of social allowances and taxes on wealth? Well it is a country just next to the French border. There, the less Big Government, the more chance to win elections.

German chancellor Angela Merkel has just won a historical election: she gained 8 points compare to the last election 4 years ago, and got the best CDU’s results in the last 20 years. And she did not make « wonderful » promises. On the contrary she was getting rid of the welfare state.

Germany Resisted To The Crisis

Let’s give a glimpse on what the German economy has become.

First of all, Germany has never really been hit by the crisis. In 2010, the German GDP growth reached 4%. If unemployment exploded in the Euro zone, it decreased in Germany and fell under 5%. The reason of this success: certainly not « public reflation.» Between 2008 and 2012, investments in infrastructures fell from 0.7% to 0.6% of GDP whereas they grew in OECD countries from 0.8% to 0.9%.

Actually, dismantling the Welfare State has lead to these good results. Since Germany has less civil servants (50 civil servants for 1000 inhabitants in Germany, 90/1000 in France), the German Federal Goverment make a yearly saving of 135 billion euros that France cannot do.

Concerning pensions, in 2001 Germany has begun to establish a per capita system thanks to tax incentives. Workers can save up to 4% of their gross salary in mutual funds. Per capita pensions amount to almost 15% of all pensions.

Hospitals that were loss-making were reorganized, even shut down and replaced by private hospitals.

In 2007, Angela Merkel has even inscreased competition between insurers by forcing them to have more accountability and budget control. This competition has lowered the costs (-3% per year) of a health system that is one of the best in the world.

Angela Merkel’s victory is more than a mere reelection. It is a living lesson for those who are fearful to reform when they get into the executive power.

Legitimacy and The Cost of Government

A comparative study of training in the private and public sectors: Evidence from the UK and the USA