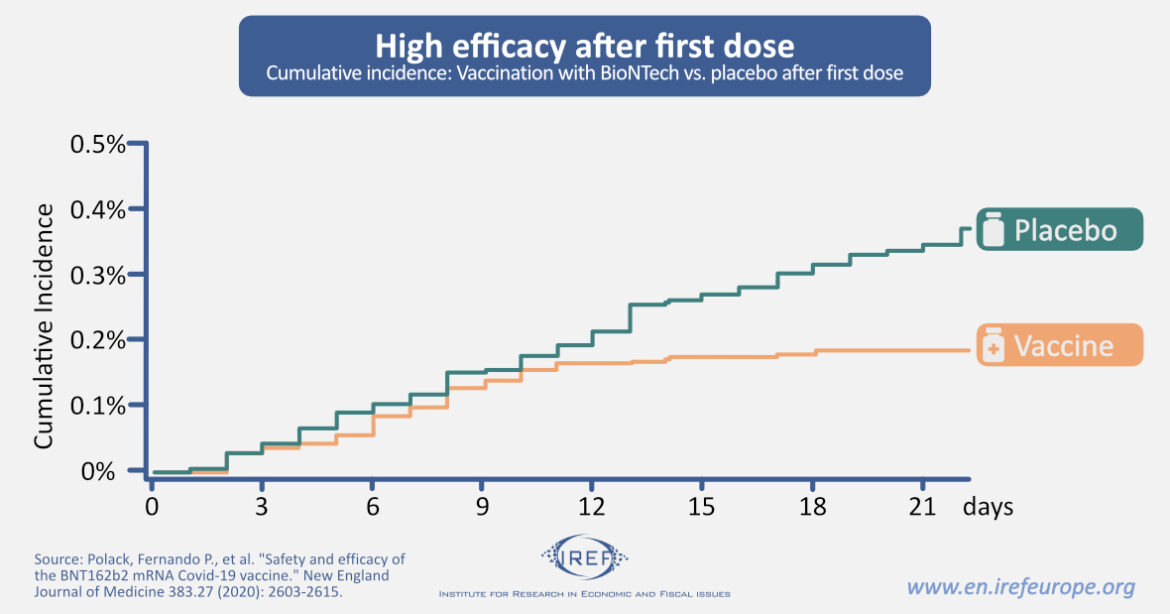 Jabs are the way out of the COVID-19 pandemic. The UK, US, and Israel have made much progress with their vaccination programmes. In continental Europe, however, life-saving vaccine doses are scarce – partly due to the EU’s unfortunate purchasing policy. In light of the scarce vaccines and of the suffering caused by the virus, it is necessary to distribute the existing doses efficiently. It is becoming increasingly evident that the first shot already offers high protection against serious illness and frequently avoids fatal consequences. All existing doses should thus be used to distribute first shots and provide basic protection to as many people as possible.

The effects of the first dose

Except for the vaccine by Johnson & Johnson, all COVID-19 vaccines permitted in the EU need two doses to obtain full protection. The timing of the approval procedure largely affected which vaccines were first available. Approval came faster for vaccines that present a shorter interval between the two shots. BioNTech/Pfizer was the winner: according to the UK Government’s data analysis, protection starts building up around ten days after the first dose and reaches 89% protection in two weeks. It gives 95% protection seven days after the second shot, which is due three weeks after the first. 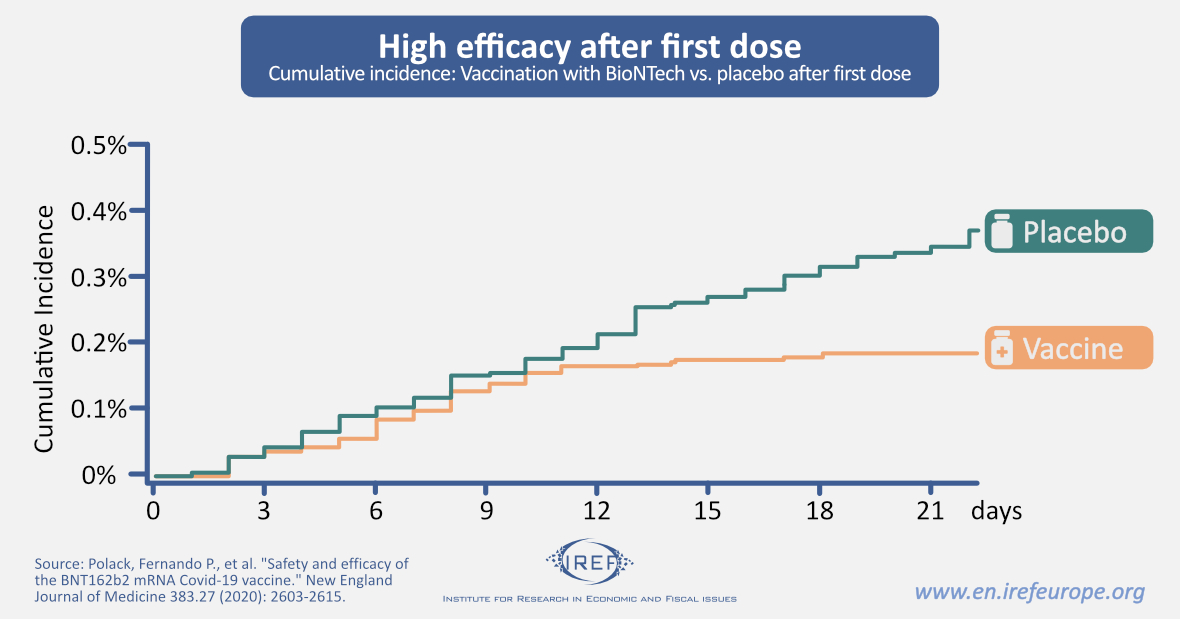 AstraZeneca initially reported 70% efficacy after evaluating their study based on two doses. The company had to admit, however, that in some cases efficacy is lower. AstraZeneca varied the interval between first and second dose between four and twelve weeks. The authorities therefore also resorted to recommending a time span of up to twelve weeks when approving the vaccine.

Moderna’s mRNA vaccine exhibits 95% efficacy with an interval of four weeks between first and second shot. Yet, the US approval authority FDA certified that the first shot already offers protection greater than 80%.

Johnson & Johnson: only one shot

The fourth vaccine approved by the EU is a special case. The vaccine by Janssen Pharmaceuticals, a subsidiary company of Johnson & Johnson, involves only one dose. This is not due to any particular attributes of the. Rather, the relevant approval tests were successfully conducted by inoculating just one shot to participants.

Johnson & Johnson’s study began in early September 2020 and was completed successfully in January 2021. The vaccine reaches 85% efficacy 28 days after vaccination, a level similar to what the British authorities have estimated for BioNTech/Pfizer in the third week after receiving the first shot. The company already started a study using two doses in November 2020 while the study using one dose was still in progress.

Prioritising first doses is not revolutionary

Considering the all the vaccines approved by the EU appear to be highly effective after the first shot, one wonders why some vaccination programmes refuse to inoculate the first dose to the largest possible number of people and extend the interval between first and second shot. This is actually what the UK has been doing. Since the end of January, the UK distributes second shots of both AstraZeneca and BioNTech/Pfizer only after twelve weeks. After extensive data analysis, the Canadian authorities also started to prioritise first shots and delay second doses.

Evidence from the field

Recent UK data reveals that the AstraZeneca vaccine is more effective if more time passes between the first and the second shots. An interval of less than six weeks results in 55,1% protection, while an interval of more than twelve weeks results in 81,3% coverage. Evidence from Israel shows that the BioNTech/Pfizer vaccine reduces the rate infection rate by 85% between the 15th and 28th day after the first shot. In other words, delaying the second dose could make sense for countries that struggle with a vaccine shortage and would allow them to obtain broader population coverage by focusing on the first shot.

Experts do not ignore variants. However, mutations with serious consequences have so far mainly happened in populations with high incidence rates. Refusing to prioritise first shots could lead to higher incidences and thereby increase the probability of mutations.

Maximising the number of first vaccinations

To summarise, the present COVID-19 vaccines are surprisingly effective, and the first shots offer significant protection from severe illness and death. The benefit of every additional first shot is greater than those associated to the second shots. Given the current vaccine shortage and the low risk of mutations, it would be best to use all doses currently available for primary vaccinations and increase BioNTech/Pfizer’s and Moderna’s intervals to twelve weeks. 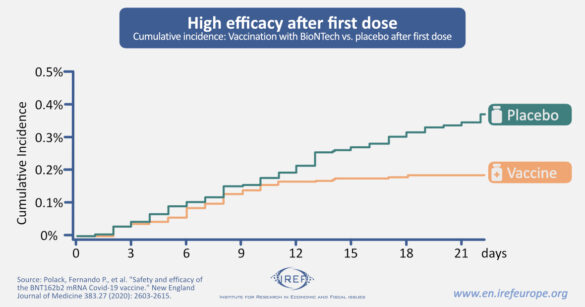