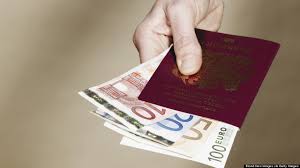 European nations’ fiscal authorities must be doing an excellent job if people are willing to pay hundreds of thousands of euros for the privilege to pay taxes to them… Or is there something else behind the new market for EU citizenship?

The best possible product with which to enter a market is one whose (marginal) production costs are zero and yet somehow competition is prevented from producing it and charging a lower price. Unfortunately, not many products like this exist, at least in the medium and long run. In the short run you could try to get a patent (or copyright) and prevent competition by decree. But enforcing such protection costs a lot of effort and even then all patents eventually expire. (And one hopes that so do also copyrights, although due to strong lobbying, many copyrights might never expire). But today at least one such wonderproduct does exist – but don’t get your hopes up, only European nation states can produce it. (If you are a European nation state and are reading this, please contact our marketing department if you are already not in the game.)

European nation states started to be born at around the time when Europeans invented new use for Chinese import of gunpowder. Instead of scaring enemies with big bangs, Europeans used it to mow down enemies more efficiently than a flexible small group of armoured knights could – provided you had enough musketeers to man the imprecise muskets. So you had to be very big. (Or very rich and hire Swiss mercenaries. But only few could match Vatican’s purchasing power, so size it generally was.) To pay for the first standing armies, the ruler would start selling something, whose (marginal) production costs were zero and only he could produce it: a monopoly right. (True, long-run costs of creating monopolies were astonishingly high, not just in terms of lost productivity but also in tax income foregone by the ruler, but as one popular economist once put it, “in the long run we’re all dead”.)

Today the story continues. The wave of deregulation that hit most European states at some point in the latter half of 20th century has eroded the state’s ability to grant monopolies in the “traditional” sectors, but licensing – a monopoly by any other name that smells as rotten – is alive and kicking. And such is the progress-securing power of human imagination that nowadays we are witnessing a new product: sale of European citizenships.

From fiscal point of view, European citizenship (or, to be precise, a citizenship of an EU country – any EU country) is a strange beast. Revenue (from future tax collection) is high for the ruler, while costs (such as using public services when travelling around the EU, claiming welfare or when retiring in its southern sunny belt) are spread out and off-loaded onto others. Demand for this product is very high – many are even willing to pay the highest price as they board a rickety boat somewhere in southern Mediterranean. As it has been inefficient to pay for anything with one’s life since the invention of money, surviving the boat ride and the subsequent detention camp is no longer the only ticket. And as the supply of rulers willing to sell citizenship increases, so falls its market price. Elementary economics, dear Watson. As recently as a year ago the price tag was around 10 million euros. But then Cyprus reduced the price of citizenship it was offering to anyone from whom it had previously shaven such sum from their deposits in Cypriot banks. New price tag? 3 million euros. About 8 months later the competition responded and Malta started to sell EU passports for 650 thousand. And then there is Austria. Country which fills international news with reports about difficulties of ordinary labour to obtain citizenship even with direct blood relations with Austrians and lifetime of legally working and paying taxes in the country, and yet country which has a special provision in Article 10 Section 6 of the Citizenship Act to grant citizenship outright to anyone who “who has already made and is expected to make extraordinary achievements in the interest of the republic”. No price tag. In 2011, for example, 23 people were given their EU passport under this clause. 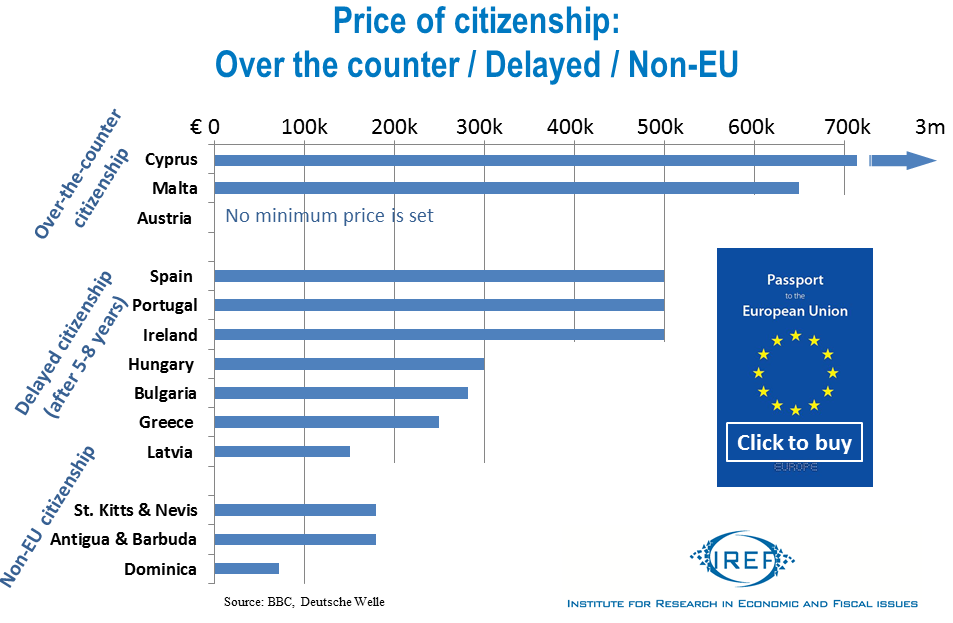 Naturally, there are now also other ways to buy EU citizenship. Depending on what the issuer has a problem with, you can get the passport by buying government bonds (Hungary, Spain) or by investing in the country’s post-bubble real estate (Portugal, Spain, Greece). But in all these cases the arrival of a passport is delayed by a couple of years (usually between 5 and 8) in which “anything can happen”. To lessen the uncertainty and wait, many countries also offer shorter “fast track” to citizenship – UK citizenship in 3 years for £10m investment, Bulgarian in 2 years for 282k euros, etc.?Name your combination of time and money and some European passport is on the menu.

Such “Golden visa” have fascinating fiscal implications themselves and we’ll return to them in a future piece. This article has only considered direct full citizenships for immediate sale. Their existence highlights the increased inability of EU member states to pursue independent fiscal policy. In effect, Cypriot or Maltese government is co-deciding on the level of German or Italian government expenditure since it is giving access to their social services by the sale of full citizenship over which the German or Italian voter has no say. If high spending is the result of voters’ preferences, at least it can be said to be fully legitimate within the democratic one-person-one-vote tradition. But free-riding backdoor-opening individual “cartel-breakers” passport sales are in effect violating the “No taxation without representation” tradition. Wars have been known to be fought over this, so this bodes badly for loving coexistence of European nations.

As long as the price tag stays at hundreds of thousands of euros for a passport, perhaps the danger of the new Europeans draining other taxpayers’ resources will remain low. But competition is very bad at keeping prices up. And what is perhaps the worst on the whole saga is the motivation for the sale: drained budgets of EU members. There are many better reasons for selling work permits. As for example the Nobel laureate Gary Becker shows, in our bizarre world where we charge people for the opportunity to sell us something cheaper than competition, a reasonable (and adjusting!) price tag for such “privilege” may actually insure against migration motivated not by prices but by hand-outs (which we seem generally unable to get rid of). However, the future of governments’ social policies cohabiting with a market for migration is also something we’ll have to return to in the future. Meanwhile, let us relax in the comfort that given the fine tradition of government bureaucracy, at least the private sector is benefitting from this scheme, too, presumably lowering the high transaction costs and reducing waste. 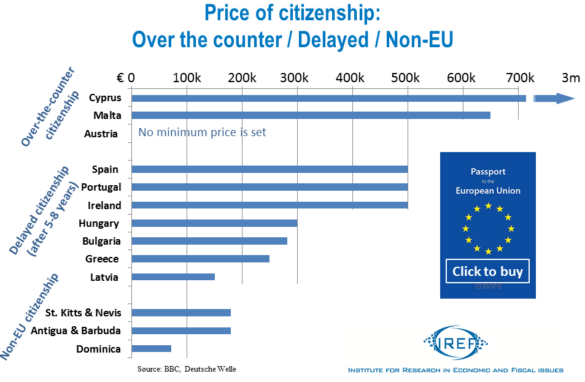