Copyright 2022 IREF Europe
Home » Grab on African resources deepens. Not by China, but by the EU.
Online Articles

Grab on African resources deepens. Not by China, but by the EU. 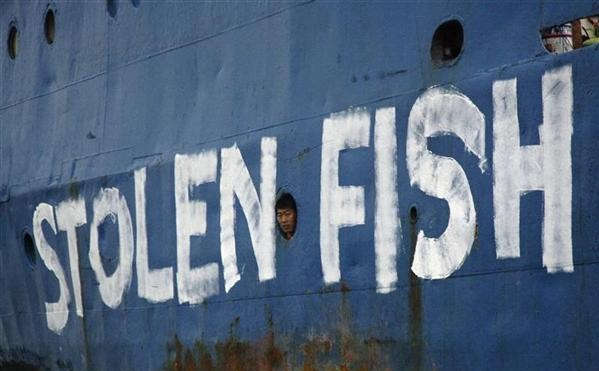 The best way how rich countries can help the poorer ones has always been to teach them how to fish. Not giving them fish. And certainly not taking fish away from them.
Yet this is what the EU has been doing since the 1970s, and in September it has renewed three multi-year greatly underpriced leases of fishing grounds off Africa, to the detriment of poor African fishermen and for the benefit of rich European ones.
This is wrong and there are better alternatives.

The European Union has been finalising in September the conditions under which EU vessels have an essentially exclusive right to fish in sovereign waters of three African nations. It has renegotiated the terms with Madagascar and Cape Verde and is resuming a deal with Guinea-Bissau, previously suspended by a coup d’état in the country. Fiscally, these agreements will cost the EU respectively 1.5, 0.5 and 9.2 million Euros annually for the next three years (two for Guinea-Bissau).

However, the economic costs borne by the African countries, the rest of the world and future generations are much bigger. This policy is not about free trade – EU is still generally closed for African business. The programme’s conditions and their execution resemble a colonial dogma replete with protectionism and environmental irresponsibility. The EU should reconsider these “agreements”.

EU programme to not teach poor countries how to fish

The three agreements are a part of a host of other bilateral agreements between the EU and altogether 14 African states (plus Greenland and Kiribati) as part of its “Fisheries Partnership Programme” (FPP), a sub-branch of the Common Agricultural Policy. Through it the EU pays local governments for the right of EU member states (almost exclusively Spain, Portugal, Italy and sometimes France) to fish in the countries’ sovereign waters.

The EU spends annually about €113 million on these “ocean leases” in Africa. Most have been in place since the 1970s and have generally openly admitted they wanted to secure food, food security for the EU and employment for its fishermen. After decades of criticism their terms now do include special provisions for human rights, resource conservation and environmental sustainability. However, these are generally flouted.

Damage done by poor execution of the system

However well-intentioned the goals may be, their execution makes them unattainable.

• Monitoring failure. In theory, there is a maximum annual quota for each species. However, these are generally flouted (in about 90% of cases). Local observers are denied access on board and vessels do not come to local ports for inspection. Therefore, not even the “excess fees” (of mere 20 Euros per tonne) are paid to host countries. 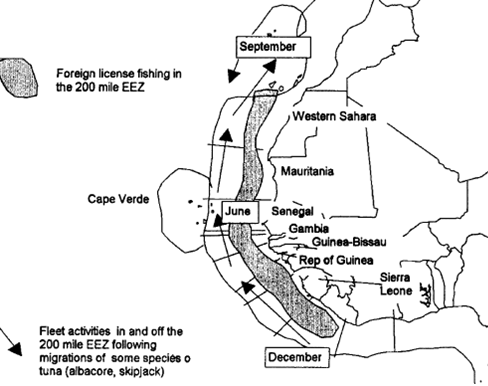 • Timing adjustment. As marine biologists point out, quotas would only work if they were evenly spread across the year. However, since the EU has agreements with essentially all Northwest African states, vessels can concentrate on a season, follow tuna (for example) on their annual migration along the coast and essentially wipe out entire troups in the several days they are passing through a country’s waters.

• Species adjustment. In spite of hi-tech, fish are naturally caught “unsorted”. For example, shrimp are usually mixed with cephalophods. The quotas usually do not set limitations on “unintended by-catch” limitations – so regulated fishermen adjust and move their activity to unregulated territory. Italian vessels with a shrimp license, for example, end up with only 8% of their total haul in shrimp. The remaining 92% are cephalophod “by-catch”. Cephalophod license owners can similarly circumvent the shrimp quotas.

Damage done by poor principles of the system

Even if the quota problems were resolved, the whole subsidy programme would still end up hurting the poor and benefiting the rich, besides reducing the planet’s fish stocks and other economic damage.

• Bad form of foreign aid. Since the host nations are all “less developed countries”, the EU records these payments as part (about a quarter) of its “Development Aid”. This money, however, does little for development. Most of it goes straight to national governments to do with as they see fit; only a smaller part is earmarked for “developing domestic fishery industry” (and again, through the government). If modern history has taught us anything about development aid distributed through governments, it is that it does not work. 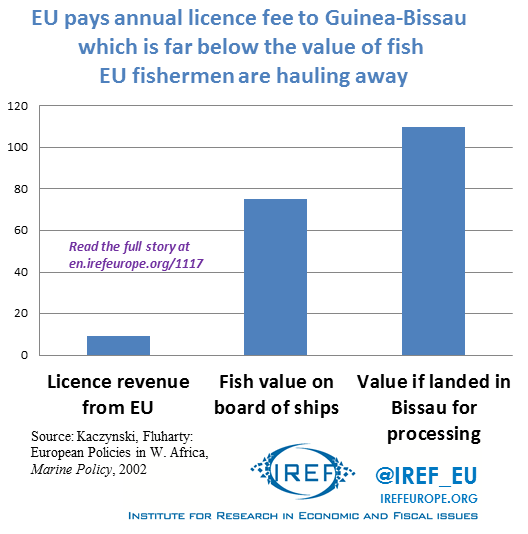 • Stifling domestic development. The programme actually damages African economies. It stifles (artisan) fishermen whose catch has dwindled as a result of EU-funded overfishing (resulting in increased fish prices in the poor countries). Domestic industrial fishing is kept undeveloped too, it cannot compete with the subsidies. If the EU wants to help, it should fund know-how and technology transfer, not pay for its own fishermen to take the catch away. As a second best, it could mandate the EU-caught fish to be processed locally to encourage at least that part of the production chain. But no. EU payments to Guinea-Bissau, for example, are estimated at only 7% of the port value of the fish in Guinea-Bissau.

• Encouraging overconsumption. On a functioning market, any fisherman could of course lease the sea from its guardian (say, a foreign government), who should/would charge a market price (which would include any over-fishing costs). But even if African governments did charge the EU such full price (which they don’t), it would still be borne not by the fishermen (and fish consumers) but by the general EU taxpayer. This increases EU fishermen’s profits (creating more fishermen), and reduces EU fish prices (creating more consumers). Jointly these two effects produce even greater strain on world fish stocks, overexploited since price signals are missing.

• Preventing “African Union”. The whole EU is predicated on the idea that freeing up barriers to local trade is a good thing. Yet its strategy of negotiating individually with each state ensures that the EU can exploit their local rivalry and pay less for sea access than if the small nations formed a unified (since they form essentially one fish habitat). Exclusivity of the EU deal also means that they cannot realistically lease from each other (as happens in Europe) and therefore even intra-African fish market is kept underdeveloped. This further unfairly benefits EU fisheries who can re-sell their processed fish there.

• Encouraging short-termism. EU encourages African governments to take the short term view. Instead of waiting for greater tax revenue from encouraging domestic population to move to higher value manufacturing from a domestic resource, they sell the resource for a quick Euro. This is what economists have termed “resource curse”.

• Promoting centralisation. Migratory issues aside, local fish stocks still suffer from a “tragedy of the commons” – local (as opposed to global) overfishing. As Nobel-laureate Elinor Ostrom demonstrated, the best solutions (especially in poor governance states) come from the interested fishermen themselves. These are now precluded by the EU dealing with national governments and rationalising their dominion over local fishing grounds.

A better directed EU “aid” should encourage local production, not take it away. Yes, it would be building competition for EU fishermen, but they can find jobs in other high-value sectors more easily than poor nations’ fishermen. But trade is the best aid. It’s time EU opened its agricultural market (including fish) to foreign competition.