Greece cannot save itself by taxing exports 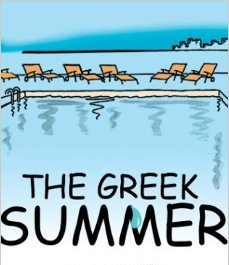 In all epochs, exports were almost always considered good for an economy. That’s why modern governments have generally stayed away from trying to tax exports. Not so the current Greek government, however. By increasing the tax rate on a vital component of Greek exports it is hoping to raise some “free revenue”. It won’t work.

Yet another Greek default now seems inevitable. The government owes so much relative to its shrinking economy that it is essentially unthinkable that it could ever repay the loans from tax revenue – the only real source of its income. (Admittedly, the Greek government is still also running some profitable state firms such as water companies and other utilities, but their annual profits are in the millions at best. Greece needs to pay back billions this year alone.)

In an attempt to show that “it is trying everything”, the Greek government has just announced a drastic increase in the tax levied on international tourism – from 6.5% to 18% (as VAT on hotels and restaurants). Just as the summer tourist season is about to start…

This plan cannot work. International tourism is too important for the Greek economy, and taxing “foreigners” does not actually raise extra “free money”.

Tourism taxes are often surrounded by a myth of free money. A tax on foreigners’ economic activity in the domestic economy sometimes seems to politicians (and to large parts of the public) as a costless source of revenue. If Greek government taxes a domestic transaction, it (hopefully) realizes that it has made a Greek (or two) poorer. Greek government cannot tax (rich) Germans directly, but when the Germans come for a holiday, it can – by making them subject to not only the VAT, but also various special taxes tied to hotels and restaurants. And since “it is foreigners who are paying”, such taxes are portrayed as harmless to the domestic economy.

This is truly only a myth. The damages to the Greek economy – and Greeks – are numerous.

Taxing tourists: what is seen and what is not seen

When a tax is imposed on international tourists, this has two main effects:

– On those who actually make it to Greece. It is theoretically possible that an increased tax rate may actually increase government revenue. International tourists are in a “captive market” and have to eat locally just like checked-in passengers at an airport cannot easily go out of the transit zone for cheaper coffee (that’s why airport refreshments are so expensive). It “helps”, of course, if the government can surprise the travelers with the tax hike.

– On those who will choose not to make it to Greece. The flow of tourists to Greece is already below its pre-crisis levels. Greek suppliers compete with each other for their business even more ferociously than before so it’s unlikely they would be able to drop their prices to compensate the increased taxes. With their stay in Greece now being made more expensive by the tax, even more international tourists will opt for a different destination. Especially in such generally uncertain times for the Greek economy and currency. This will unambiguously decrease government’s revenue.
Crucially, these two effects are perceived differently by analysts. The first one is much more readily “seen”. Governments often claim success for their tax increasing policies when more is collected from each member of the taxed group. However, the second, damaging effect is often “not seen”. People who are priced out by the higher taxes do not even enter the statistics, and therefore the revenue they would have been contributing at the previous, lower tax rate is not recorded as lost.

(And as with any other tax, higher tax rate makes tax evasion more likely than when taxes are reasonably low.)

Research by the Greek Central Bank calculates that the second effect is dominant in the Greek tourist industry. Even at the most conservative estimates, a recent increase in VAT on certain restaurants from 13% to 23% resulted in about €100 million annual net loss in tax revenue as a result of fewer international tourists coming to Greece.

Taxing tourism is an especially bad idea for Greece

How serious is it for Greece to get its tourism taxation wrong?
The importance of tourism revenue differs across EU countries’ exports. As the table below suggests, for countries like Romania, Slovakia or indeed Germany tourism is only a negligible component of export revenues. In the Mediterranean, however, things are different. About a quarter of all Greek exports is tourism. It may be less than Croatia’s 39%, but Croatia is much more careful not to tax itself out of the tourism industry. 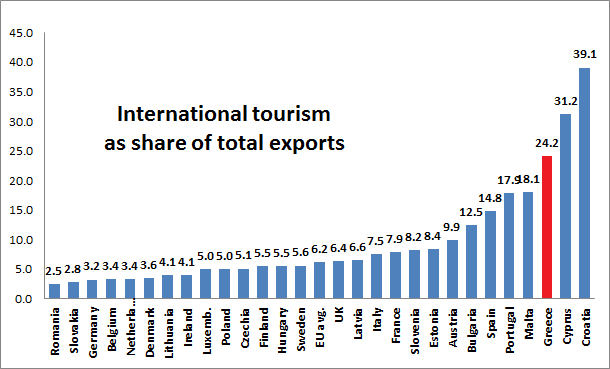 The tourism industry is not just a large component of exports. Overall it accounts for some 15% of total Greek GDP.

Frequent tax changes are themselves bad

Over the last three years alone, Greece has seen the following tourism tax changes: tax on hotels fell from 11% to 6.5%, only to increase to 13% for a while. VAT on restaurants changed from 13% to 18%, to 23% for some and 6.5% for others, and changed again to 13 %. Both hotel and restaurant taxes are now scheduled to climb to 18%.
Incoming tourism is an industry dominated by long-term planning. It takes time to build capacity for accommodation and nourishment. These will only be undertaken by Greeks in an environment where the rules of the game (including tax rates) have some permanence.
The current tax hike is therefore hurting doubly: not only does it undermine Greek economy’s vital sector, but by increasing the uncertainty it damages also its long-run viability even under less draconian tax rates. 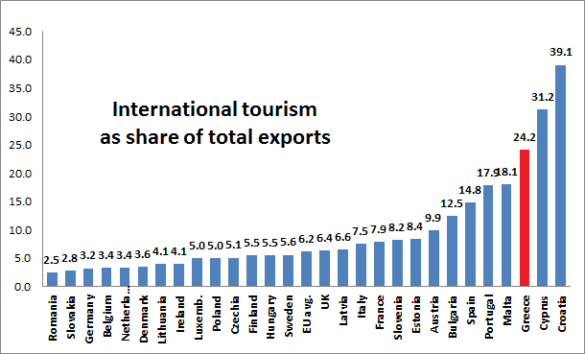