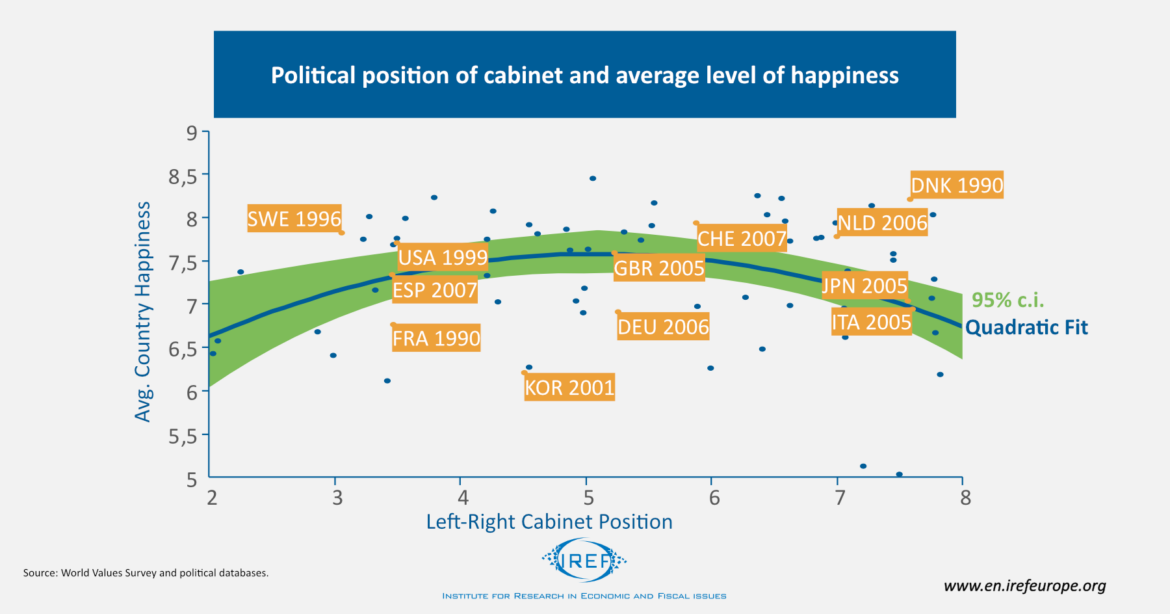 Recently, a new “specter” has been haunting Europe: populist parties (left or right, here we have the full menu) appear to gain more and more approval at the polls. In some cases, they also manage to win the elections and enter the cabinet. From Hungary to Poland, Spain, Italy (and, according to some observers, the UK as well) we are spoiled for choice. Yet, observers sometimes fail to notice that the very existence of ideologically radical governments, as often cabinets involving populist parties are (such parties are usually rather extreme from an ideological point of view), can also have a significant impact on citizens’ happiness.

This emerges from an analysis conducted on 46 countries and 180 thousand voters over 20 years. The results confirms the ancient locution “in medio stat virtus”. If compared with situations characterized by the presence of radical governments, it appears that moderate governments are more likely to enhance residents’ overall happiness. This remains true also after controlling for a whole series of other possible explanatory factors, both at individual and country levels.

In this light, the figure below shows the curvilinear relationship between the average ideological position of cabinets on a 0 to 10 (left-to-right) scale and the average level of happiness in different countries. This latter variable is estimated along a 1 to 10 scale (where 10 is the maximum amount of happiness) according to the respondents’ answers over different waves of the World Values Surveys. 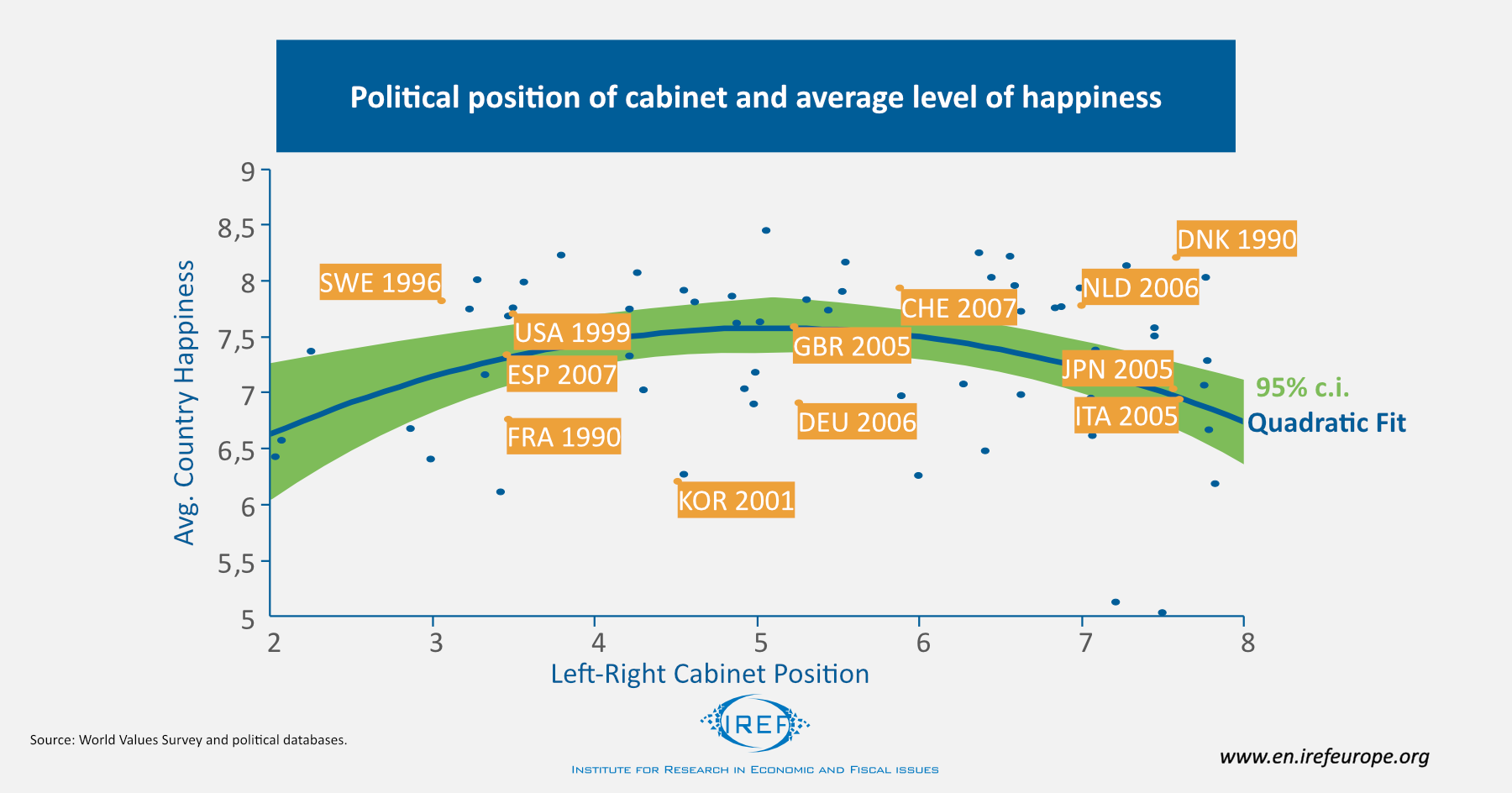 As one can notice, the average happiness of citizens is rather low for leftist/rightist cabinets, while it increases for centrist ones. To give an idea about the magnitude of such relationship, let’s compare it with the one emerging between happiness and economic indicators. For example, the literature has repeatedly highlighted the role played by a country’s economic growth on happiness: the higher the former, the brighter the expectations of residents about their future and, as a result, the higher their average happiness. In this respect, moving a government’s position from a moderate to a radical position (says from 5 to 2 along the left-to-right scale) produces an expected negative impact on happiness roughly equivalent to the impact of 1.4 percentage points slower GDP growth over five years of a given country. This is far from being negligible as a result.

Why such result? What is the mechanism behind this finding? If we assume that ideology plays a role in motivating governments’ choice of policies, citizens’ happiness does depend on where a government is located along the left-right spectrum, and consequently what policy measures it seeks to carry out. In particular, from the viewpoint of individual citizens, what matters is the relationship between their own preferences and those of their government. To the extent that a government’s policies are predicated on its ideological stance, outputs may depend on which party is in power, ceteris paribus, and citizens would be happier with a government that pursues policies closer to their own preferences. Accordingly, a moderate government tends to please citizens, who are themselves moderate and usually represent the majority in each country.

It is interesting to point out, however, that according to the data, even the most ideologically radical voters appear to be “happier” when moderate governments are at the helm. Two different, but interlinked, dynamics explain this puzzle. On one side, a centrist government does not prevent radical voters from feeling (eternally) different from all the others. As the Italian movie director Nanni Moretti reminds in “Caro Diario“: ‘Do you know what I was thinking about?…that even by living in a society better than this one, I would always agree with a minority…I believe in people, I just do not believe in the majority of people. I suspect that I will always feel myself more in my place, and be in agreement, with a minority.’ This sense of diversity is obviously threatened when a “friendly” government is in power. As a result, a radical cabinet will certainly disappoint the moderates. Yet, it will also hurt those closer to that (radical) government.

The role of (great) expectations and their possible (later) disappointments is a factor that reinforces the previous dynamic. Compared with moderate governments, a (relatively) radical cabinet faces much greater external and internal constraints when it tries to alter the status quo. As a consequence, radical/populist supporters are more likely to feel frustrated. The Greek cabinets led by Tsipras are perhaps a fitting example in this regard. By contrast, moderate citizens never expects that the government for which they voted carries out deep changes. If anything, the exact opposite is true. Accordingly, the odds of seeing their expectations disappointed, and thus experiencing a negative impact on their overall level of happiness, are reduced.

In short, if we follow Bentham’s utilitarian axiom that social welfare is measured by the greatest happiness for the greatest number of people, then the key implication of the results reported above is clear: go with the moderate cabinet! After all, isn’t happiness the ultimate goal of every citizen? The problem, of course, is that voters around Europe seem to have forgotten the great classics. 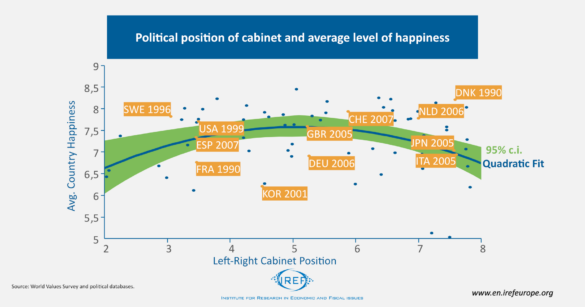