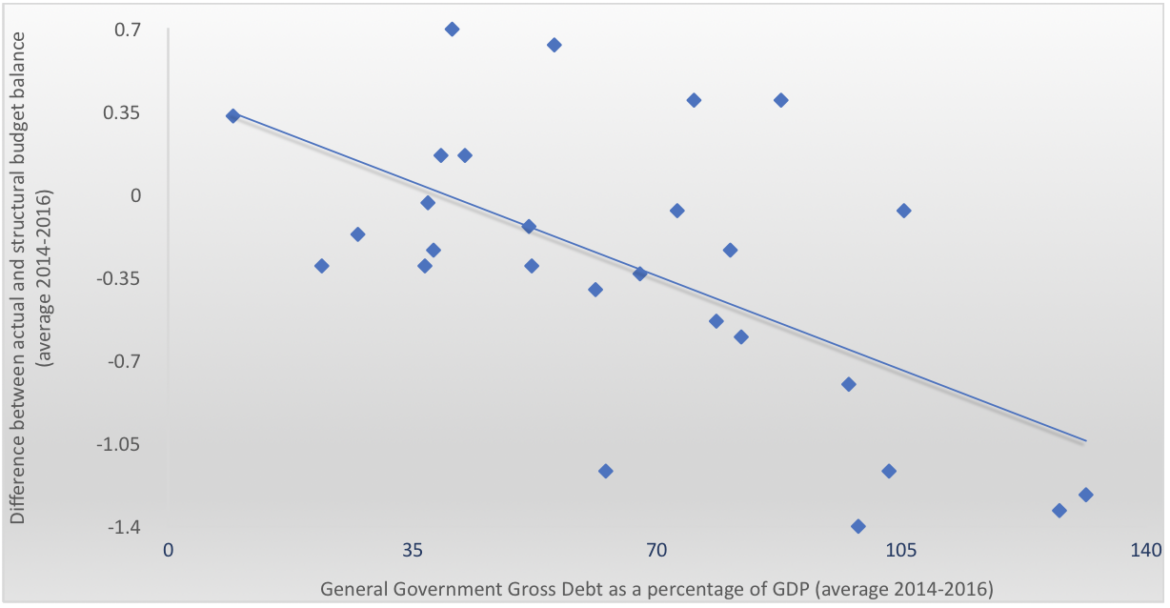 The European Fiscal Board (EFB) – an agency established in 2015 by the European Commission to evaluate the implementation of EU fiscal rules and to advise the Commission on fiscal policies suitable to the euro area – has published its second annual Report (10th October 2018). The Report reviews the EU fiscal context in 2017 and comes at a delicate moment, when the dispute between the European institutions and the Italian government has become critical, and many observers argue for new approaches to fiscal discipline.

The Stability and Growth Pact – the cornerstone for keeping budget deficits under control in the Eurozone – has become tremendously complex. The vade mecum with which fiscal policymakers should comply exceeds 220 pages. Yet, EFB predicts that initiatives to simplify the Pact are not enough and are unlikely to succeed. Incremental reforms have reached their limit, and a more fundamental overhaul is needed.

In brief, the EFB suggests a rigid control of government expenditure when public debt exceeds 60% of the gross domestic product (GDP), and ample flexibility when the weight of public debt is below the 60% threshold. Interestingly enough, the EFB proposal emphasises the need to control expenditure (which implies reductions in the size of government), rather than budgetary discipline (which would allow for increases in taxation).

Today, member states that are not subject to an Excessive Deficit Procedure must comply with the provisions of the so-called preventive arm of the Stability and Growth Pact. This arm requires that each member state aim at a structurally balanced public budget. Deviations are allowed only in the presence of an output gap, i.e. when actual GDP is lower than its potential level. However, how does one define potential GDP? Do value judgements influence the assessment? Can politicians affect the outcome? These questions are critical, since by overestimating the difference between potential and actual GDP, it is always possible to claim that economic performance is burdened by a cyclical component, and that more public deficit is unavoidable, and perhaps even necessary. Put differently, the size of the output gap affects a country’s eligibility for flexibility clauses and, therefore, the criterion with which the country’s public deficit is evaluated.

In March 2016, the Ministers of Finance of eight member states (Italy, Latvia, Lithuania, Luxembourg, Portugal, Slovakia, Slovenia and Spain) sent a letter to the Commission voicing their concerns about the commonly agreed method for estimating potential GDP and the output gap. In their view, the method in use at the time neglected country-specific differences. A similar request was repeated a month later at the informal ECOFIN meeting in Amsterdam. In March 2017, the Ministers of Finance of France, Italy, Portugal and Spain sent a new letter to the Commission. In that letter, they repeated their doubts over the reliability of the commonly agreed method. In March 2018, the Economic Policy Committee – a body set up by the European Council in 1974 – eventually recognised the need to amend the agreed method for estimating potential output and to take into account country-specific features. Yet, these changes introduced further elements of discretion, and unleashed waves of bilateral negotiations between the Commission and single member states, each of them asking for ad hoc provisions.

Figure 1 below shows the impact of the revisions when applied to the 2017 data. Notice that the case of Ireland is very peculiar, for GDP growth in 2015 (25.1% in real terms) was three times greater than the previous estimate, due to the fact that overseas companies were included in value of corporate sector. 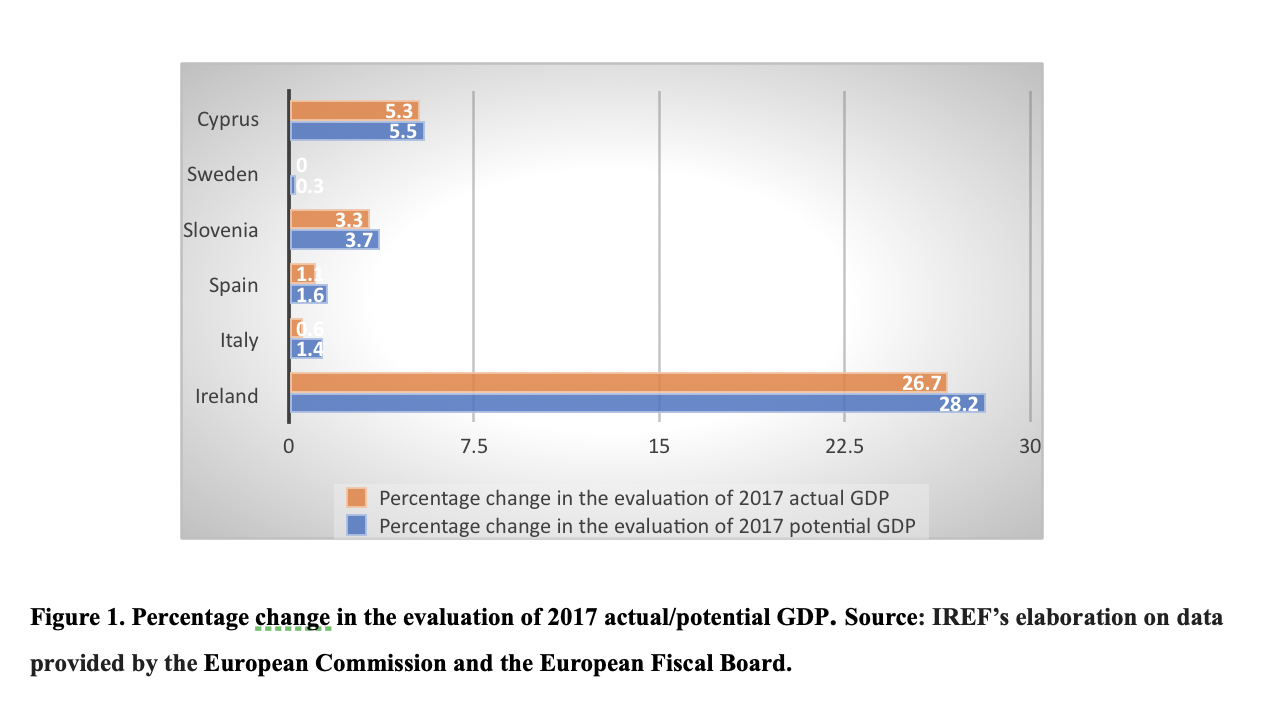 In six countries, Italy is one of them, the revised assessment of potential GDP for 2017 was greater than that of actual GDP. Since potential GDP is the denominator of the structural budget balance ratio, its upward revision entails a reduction of the weight of the structural deficit. The upshot is that more fiscal slack is tolerated.

Indeed, as IREF’s own elaborations show (Fig. 2a and 2b below), if one looks at the six EU countries considered above, there is some correlation between the average public debt over the 2014-2016 period and the difference between the percentage change of potential versus actual 2017 GDP. This evidence – although only suggestive, given the very small size of the sample – agrees with the presumption that more indebted countries have an interest in overestimating potential GDP. Remarkably, if one considers all the EU countries (Fig. 2b below), gross public debt is negatively correlated with the gap between the actual and the structural budget ratios. In other words, the greater a country’s debt, the greater is the difference between the actual and the structural deficits. One may note that only a fraction of these differences is explained by differences in the business cycle. Most of them are due to how the potential GDPs are computed. 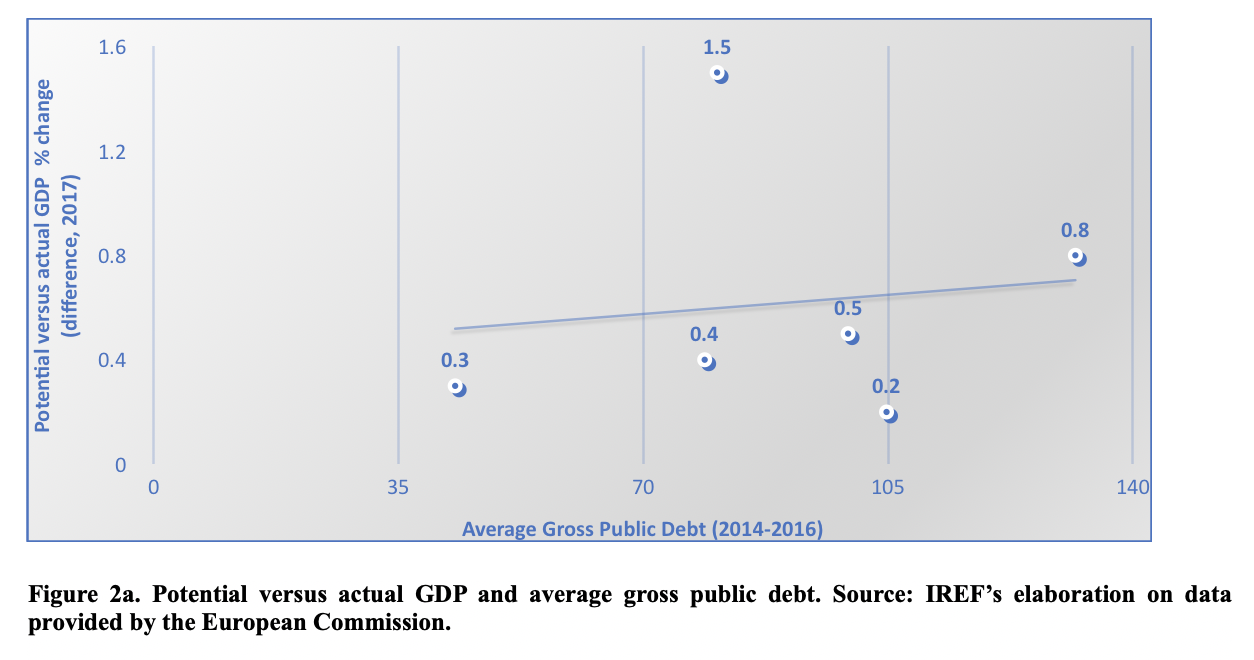 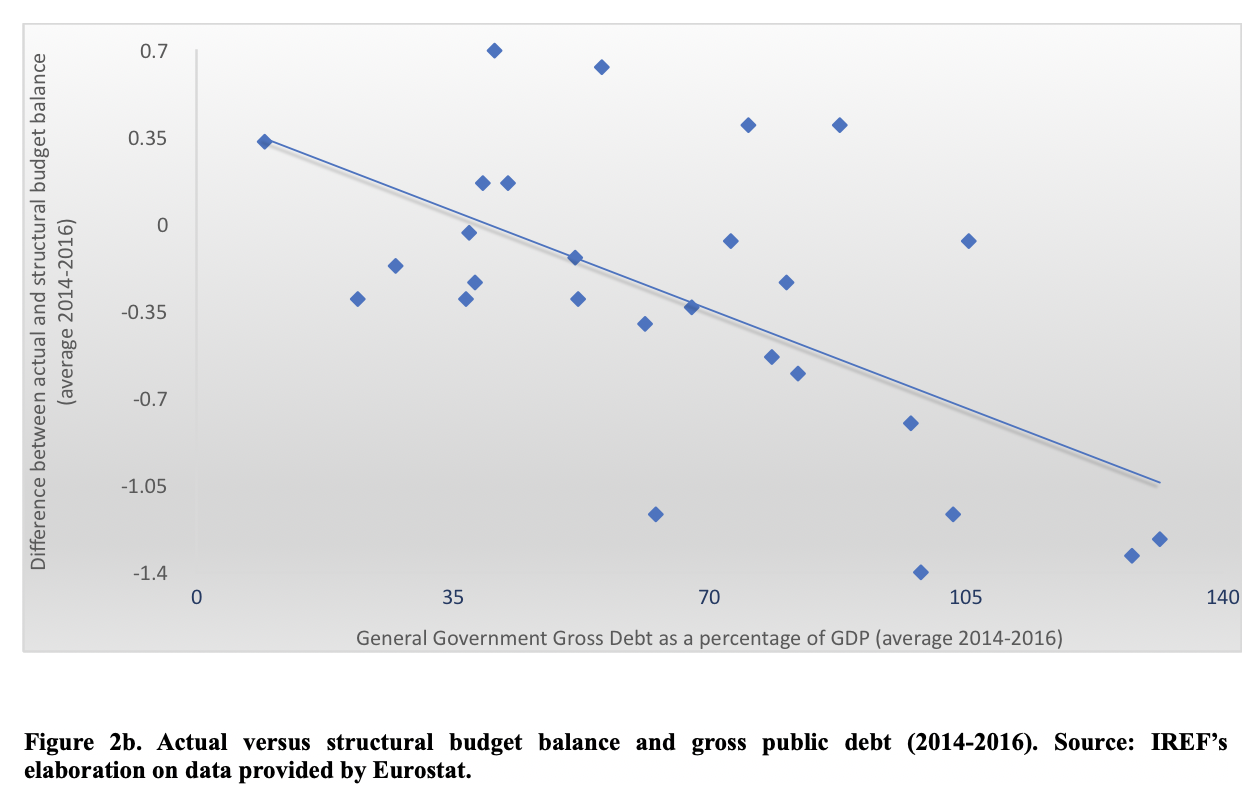 Proposed Amendment to the Stability and Growth Pact

The recent amendments to the EU fiscal rules have certainly helped EU governments to bargain with the European Institutions for more fiscal leeway, but some of them have missed an opportunity to bring about fiscal adjustments.

What does the future hold? As emphasized earlier, the EFB suggests the adoption of one single rule: control of government expenditure when debt exceeds 60% of GDP, and budgetary flexibility in the opposite case. EFB also suggests the introduction of escape clauses, to be applied parsimoniously, and only under exceptional circumstances.

Of course, it is not evident that the EFB proposal will be accepted with enthusiasm by all the actors involved. Moreover, one fears that governments will find ways to circumvent even the simple 60% rule. It happened in the past, and it might happen again in the future, perhaps by taking advantage of a loose interpretation of the escape clauses. In fact, Europe lacks a culture of fiscal responsibility and good administration – the only thing that can really enforce discipline over governments’ choices. 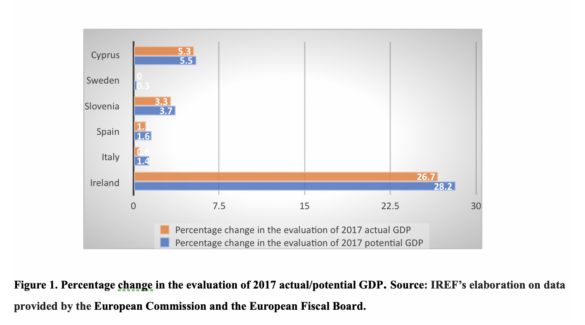 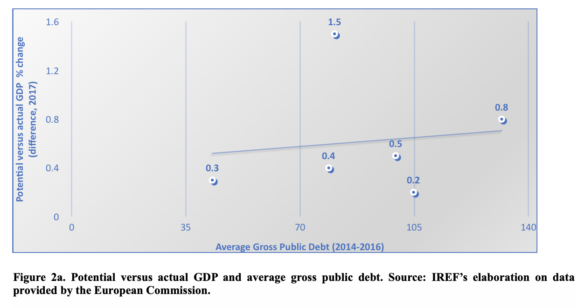 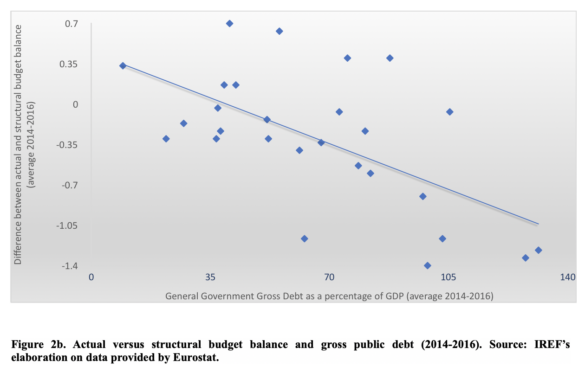