How taxes have created the cheating Volkswagen 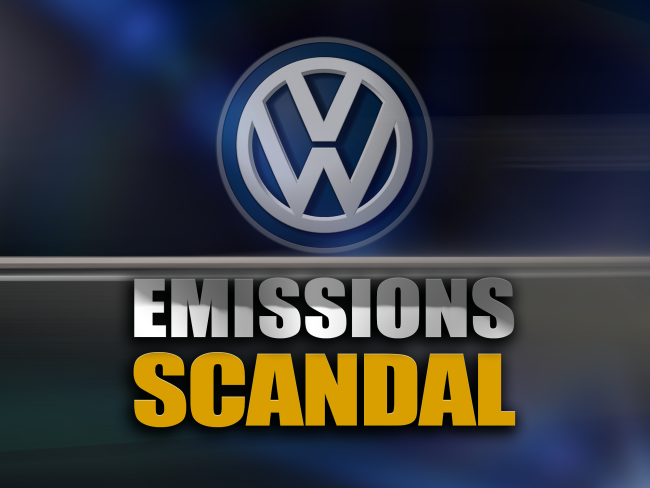 Strange behaviours are often caused by strange taxes or subsidies. The strange behaviour of Volkswagen believing it could cheat and not get found out was motivated partly by the strange tax/subsidy policies in Europe which subsidised diesel at the cost of petrol cars.

Behind every strange behaviour, there usually looms a strange tax. (Or subsidy.)

Volkswagen managers and controllers certainly behaved strangely if they thought that their cheating on emissions tests would never get found out. Is there a strange tax/subsidy at work here? There is, and its continued existence is very topical for the current negotiations at the climate conference in Paris. VW’s deception was wrong, but it was a wrong reaction to a wrongly designed environmental policy in EU countries.

At the beginning was a European wish to reduce air pollutants, especially after a series of international conferences in late 20th century. That wish is actually not unreasonable. 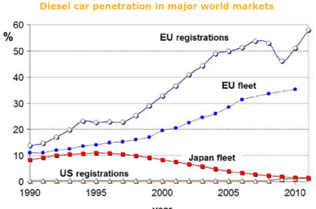 The real problem was not the declared goal but the route chosen to reach it. On the choice of petrol vs. diesel powered cars, Europe decided to prefer diesel, mostly because that option was promising to reduce CO2 emissions more. This produced a significant boom of diesel cars on European roads. USA and Japan with no specific preference either way saw either no boom or even a retraction.

Trying to reduce overall fossil fuel and concentrating on CO2 emissions, European governments skewed their tax/subsidy policies in favour of diesel. They neglected the fact that compared to petrol engines, diesel may emit less CO2, but also emits more of other pollutants, especially particulate matter and NOx (about 14 times more assuming the diesel car is in top condition; much worse in some new EU entrant countries where owners often remove and sell the catalytic converters).

European love with diesel expressed itself in several tax ways.

1. Lower purchase/registration tax. Many countries (at least for a while) reduced taxes for registering or buying a diesel car. (This is what Volkswagen now fears it may have to repay).

2. Diesel tax rebates. Today, 8 EU countries offer a (partial) rebate of diesel tax paid by professional drivers. In Spain it may “only” be 2.7 cents per litre, but in Italy it is much higher. Italy has also had these tax rebates the longest, since 1999, five years longer than the second oldest diesel rebate programme (Belgium). Overall, about €4.5 billion was reclaimed. These 8 countries’ rebates alone make diesel 4 cents per litre cheaper than petrol on EU-wide average.

3. Tax preference at the pump. The largest tax favour afforded to diesel over petrol, however, is the lower tax rate paid directly at the pump. On sales-weighted EU average, tax on diesel is 14 cents/litre lower than on petrol. The highest relative gap is in the Netherlands (28 cents/litre); only the UK is aiming to tax diesel and petrol in the same way. These lower taxes add up to roughly €2,600 per average EU diesel car’s lifetime.

To be completely fair, commercial truck drivers should be excluded when we try to calculate how much tax have policies skewed consumers’ choices towards diesel. Unlike cars, trucks/lorries generally cannot choose the fuel type. Excluding them yields the following distribution of implicit annual subsidies to diesel over petrol. 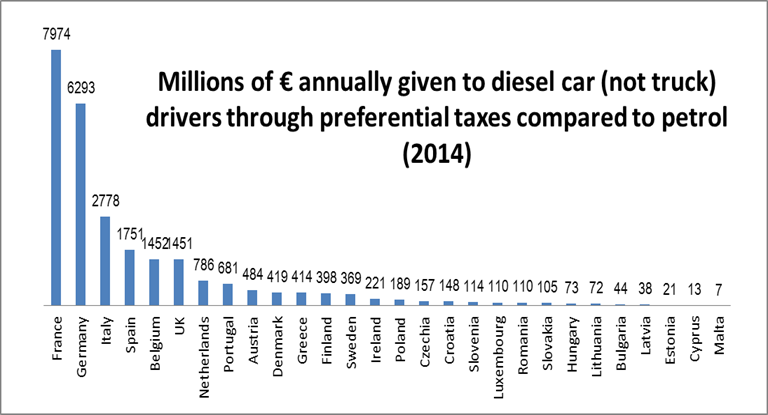 The total sum of about €26.7 billion (per year) is roughly the total revenue governments are giving up through the diesel discount. This money could have been used to lower other taxes or to pay off government debt.

The chart is naturally dominated by larger countries, so the following picture recalculates this implicit annual subsidy on per capita basis. 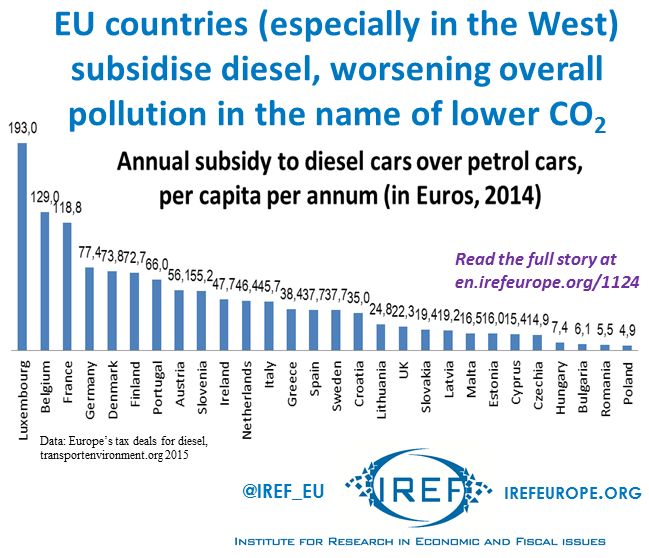 Northwest Europe generally subsidises more heavily than the Mediterranean and also more than Eastern Europe (where, however, lower subsidies mean more due to lower wages).

Effectively, European governments are paying diesel drivers to pollute more (particulates and NOx) than petrol cars. (It is true that diesel cars often have better mileage/litre, but diesel cars are also more expensive to produce and maintain, i.e. using more of other resources.) 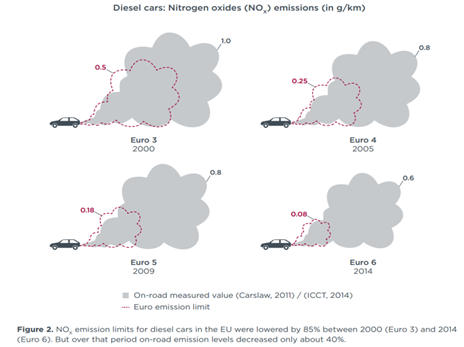 Instead of getting rid of the diesel pollution problem by removing the subsidy, European countries tried to offset one regulation by another. Various standards of “Euro 1-6” set out explicitly serial reductions in NOx emissions to be achieved by diesel cars. Manufacturers had to show that their cars achieved them under very unrealistic laboratory conditions. Manufacturers taped over the chassis to make it hyper-aerodynamic (but unusable in normal life), and the “driving profile” (speed changes) were very different from the way people use their cars in reality. In fact, they were so different (and always the same) that they actually enabled the “VW loophole”: the software recognised that given this strange driving behaviour, the car must be actually undergoing a test, and adjusted the motor operation to “pass the test”. (If the central computer continued such “special mode” also in actual driving conditions, it would have quickly ruined the motor.).

This government regulation failed on at least two interrelated counts:

1) The targets were unrealistic from the point of view of technological development and laws of physics.

2) It was increasingly clear that not just Volkswagen, all cars exhibited much higher emissions in the real world. Even the IPCC (whom EU governments generally trust) was openly criticizing this discrepancy.

The cloud’s silver lining will come if the Volkswagen scandal helps to reveal the misguided fiscal preference of diesel in Europe (uncopied elsewhere in the world). If Europe had not increased the pollution problem by the tax policy, Euro standards for diesel would matter much less because there would be now be fewer diesel cars in Europe. 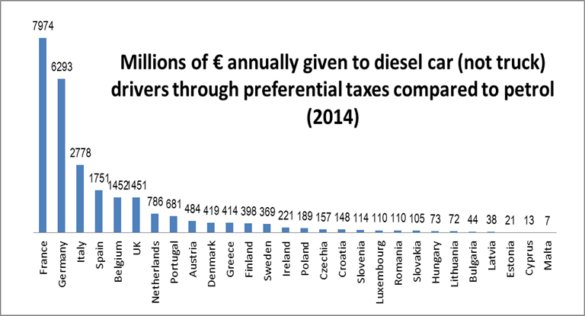 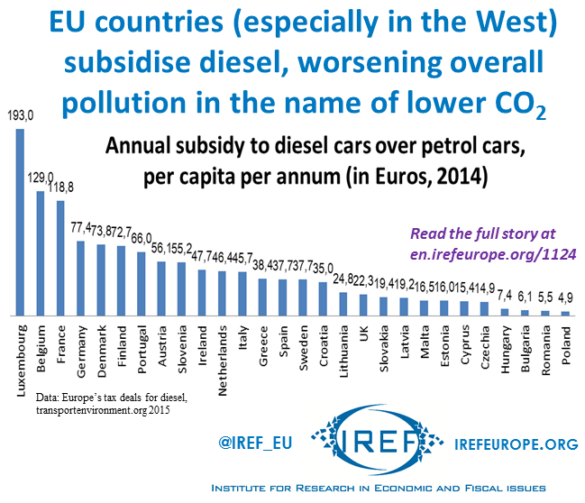