Copyright 2022 IREF Europe
Home » Improving the environment in the EU: taxation does not work, property rights do.
Online Articles

Improving the environment in the EU: taxation does not work, property rights do. 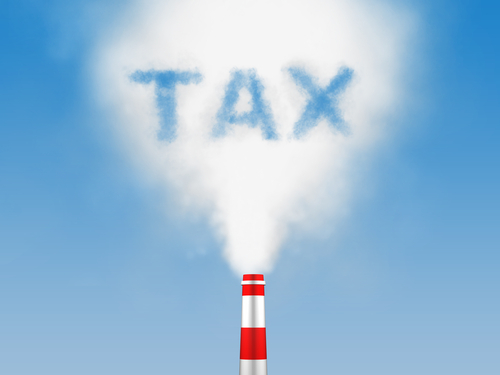 Two routes exist in theory towards making people behave more environmentally: through taxation, and through better defining and upholding of property rights. Empirical evidence suggests that at least in the EU, environmental taxation does not seem to work. Greater reliance on property rights should be the guiding principle during any environmental negotiations.

The 21st annual United Nations Climate Change Conference has started in Paris. It is the most media-covered one since Copenhagen 2009, because unlike in the intervening years, it has set out to achieve some legally binding agreements on the environment. Only the future will tell how legally binding can anything be in international law (Kyoto Protocol and others offer little hope).

Even if some quantity “limits” on pollution are agreed, the question will remain just how those (per country) limits are to be achieved. And that will be a question for national governments.

Other than outright orders to specific companies and households “not to pollute”, public policy has two basic tools of influencing behaviour towards “better environment”. They are usually associated with the names of two English economists: Arthur Cecil Pigou and Ronald Harry Coase. In short, pollution can be discouraged either by taxation or by turning it into a property right with a price-tag.

Do environmental taxes work in the EU?

The European Commission certainly hopes so. In its Europe 2020 strategy it has committed itself to achieving its environmental and energy targets by increasing environmental taxation to 10% of total tax revenue in the EU. Member states already employ many different kinds of taxes that can be classified as environmental, mostly on energy. According to Eurostat’s latest figures (for 2013, published only last week!), they total some €330 bn over the whole EU, or 6.3% of total tax revenue. This is actually lower than 10 years earlier (6.9%), mostly because other taxes have been rising faster, so the prospects of reaching the target are slim at the moment.

But there is, of course, an easy way of achieving the 10% target: keep environmental taxes as they are and reduce other kinds of taxes. It wouldn’t be a mere gimmick: being eco-friendly would become a relatively more important way of saving some money for both companies and ordinary people, compared to today.

The more likely scenario, however, will be increased pressure to increase environmental taxes. Do such tax increases improve the environment in member states? As the following chart shows, countries differ a lot in how heavily they rely on environmental taxation today (in red) and ten years ago (blue). 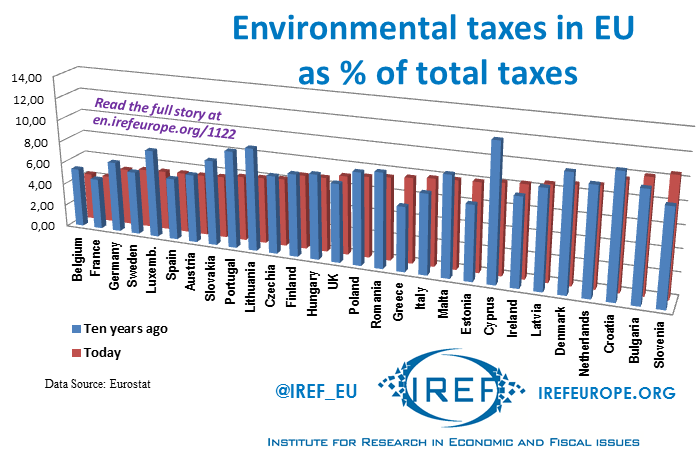 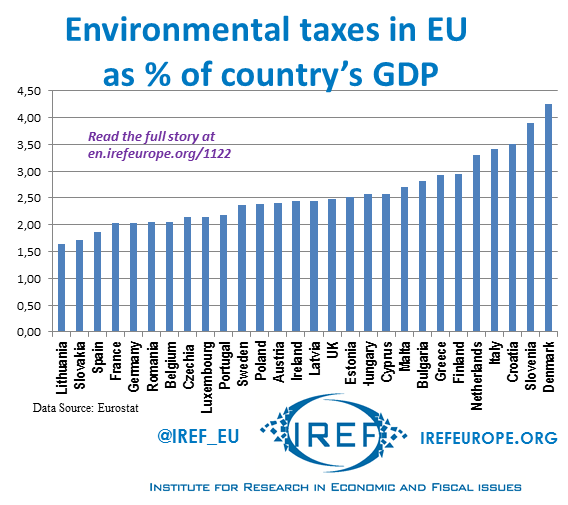 Using these lens, many large and important EU economies suddenly shift towards the more heavily taxing end of the spectrum: Spain, Belgium, Denmark, and especially Italy.

In order to assess whether environmental taxation works, we should look whether they have an impact, over time, on the country’s environment. Measuring purely one kind of emissions would always give us a distorted picture. One of the most reputable multi-faceted indexes is the Environmental Performance Index (EPI) by Yale and Columbia Universities which scores (0-100) countries on a compound measure of environmental health and ecosystem vitality. If taxes do work, we should expect that a country which increases its reliance on environmental taxation should also see an increase in its EPI score; at least over a decade, say. The following chart shows how countries changed their emphasis on environmental taxation over the last decade, and whether it had an impact on their EPI score. 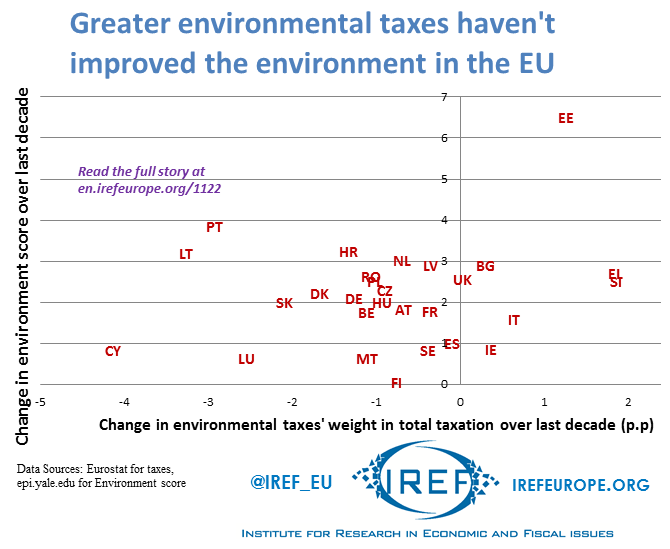 It is clear that there is no observable relationship. If anything, if we exclude the “outlier” of Estonia (top right), the (insignificant) relationship is actually slightly negative (higher taxes worsen the EPI score). Using environmental taxes as share of GDP rather than share of total taxes produces similar jumble with no relationship. At least in the EU, therefore, taxation policy does not seem to influence country’s Environmental Performance.

Do property rights improve the environment in the EU?

As we said above, there is alternative to the “Pigouvian” tax method. Ronald Coase showed that if allowed to negotiate and bargain (cheaply), people will allocate (and price) resources efficiently, to maximum overall benefit. The problem with clean air is that nobody owns it, and therefore nobody bargains over it. However, governments have increasingly started to at least mimic the property right approach to cleaner environment. Specific people or groups have been put in charge of rivers, lakes and whole biotopes. Pollution permit trading schemes have been introduced which do establish a form of property right to (clean) air and allow for bargaining.

A good measure of how countries uphold and protect property rights (in general) is the International Property Rights Index (IPRI). Unfortunately its data do not go back far enough for a dynamic study, but at least we can take a snapshot of whether EU countries with a higher IPRI index (1-10) today also score better on the environment. To be fair, better property rights tend to also improve the country’s GDP, and richer countries also tend to have better environment. Therefore the chart plots environmental performance against adjusted property rights index after the effect via income has been removed (technically, these are predicted values of regression of PPP p.c. GDP on IPRI). 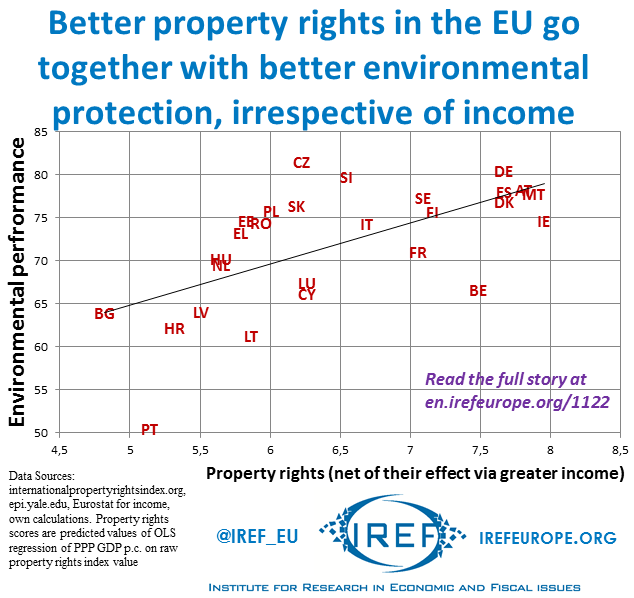 The relatively strong positive relationship suggests that instead of relying on current modes of environmental taxes, EU countries should concentrate on improving their care of property rights. This will likely prove a better way towards better environment (with higher wealth as a bonus).

Politicians in Paris are likely promote more environmental taxes. It may sound good, but they need to check the evidence. 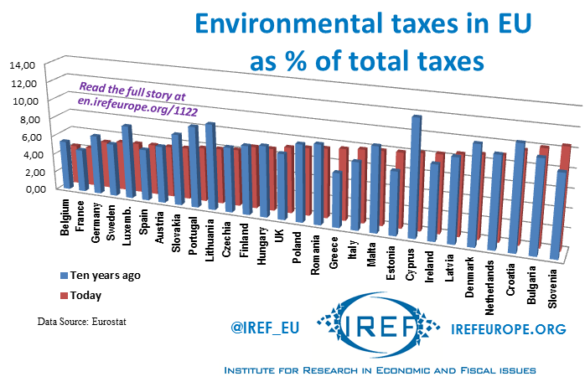 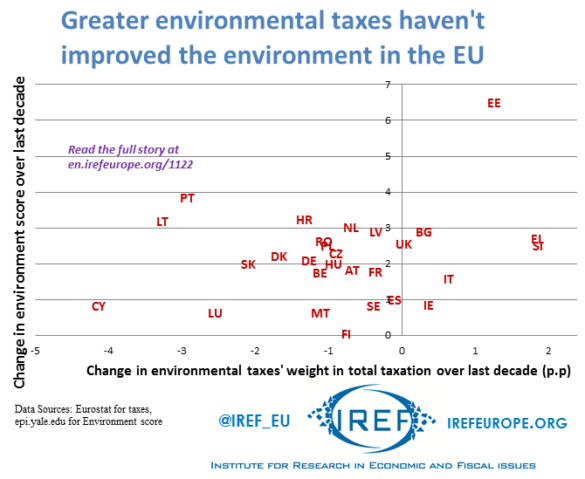 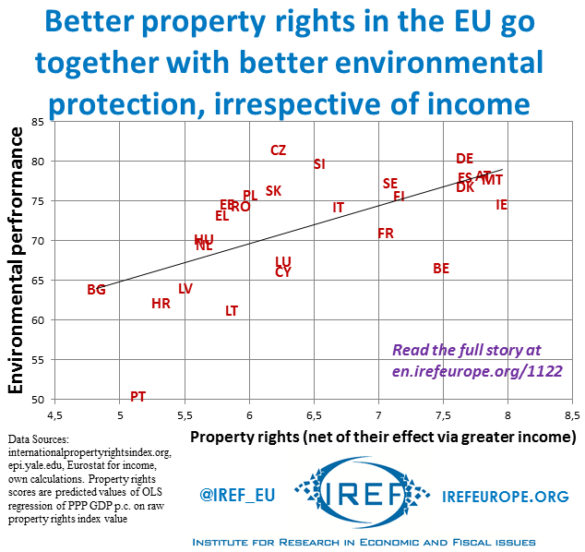