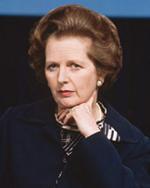 „We reform firmly, gradually and effectively” said Poland’s Finance Minister, refuting accusations that his government is postponing important reforms to public finances until after the next parliamentary elections, expected for 2011. And yet these reforms can be summed up in only in one way: they are poor.

To justify an increase in the rate of Value Added Tax (VAT), the Finance Ministry referred to the tax increases introduced by Margaret Thatcher’s government from 1979 to 1981. The British Iron Lady’s reforms were however, more comprehensive than Prime Minister Donald Tusk’s proposals. Except for the tax increase suggested by the Finance Minister, Thatcher’s government introduced other reforms regarding expenditure. For example:

– in 1980 the obligatory indexation of long-term welfare benefits (retirement pensions, disability pensions) based on inflation or the average wage (depending on which one is higher) was abolished. The new rule was introduced so that welfare benefits could only follow the price index. A 1975 law that saw indexation having to be introduced regularly every twelve months was abolished too. The possibility of indexing short-term welfare benefits to the rate of inflation – 5 percent points was introduced as well. A 1980 act of law, taking effect in 1982, abolished supplementary unemployment and sickness benefits connected to earnings, which had discouraged people from working. These were initially introduced in the mid-1960s. The benefit amounted to 1/3 of a worker’s last salary and the contribution was only 0.5% of this salary. Furthermore, benefits for striking people and their families were reduced. The criteria of receiving the sickness benefits were sharpened.

– employment in the civil service was decreased by almost 58,000 people (an almost 8% decrease in 3 years). In Poland, despite the announcement of a reduction of the number of positions, employment in the civil service and the whole public administration has been constantly increasing. In 2008-2009, the number of new posts in the public service grew by 5,000 (an increase of 5%).

These reforms reversed the course of post-war social policy, as Thatcher’s government introduced changes which no other government dared to in the postwar period. For example, benefits to which citizens had become entitled to (i.e. supplementary benefits connected to earnings) were abolished. Moreover, some reforms had long-term consequences, for example the aforementioned new indexation rule, which resulted in the limitation of an increase in social-related expenditures over the long-term.

In Poland, according to the proposed 2011 budget, the funeral grant (to help meet part of the funeral costs) will be cut by 1/3. However, despite this reduction the benefit will be high compared with the other European countries. For example, they will still be higher than those in Lithuania or the Czech Republic where they are symbolic, or as is the case in Ireland, where they do not exist at all. Furthermore, the government is planning to freeze wages for public sector employees, except for teachers, whose salaries will rise by 7%. However the savings following form these cuts are the drop in the ocean.

Above all however, in the years 1979-1981, the Thatcher government maintained budget discipline in a much more consistent way than the coalition has been able to in Poland. During these years, the public sector’s deficit in UK increased from 2.9 to 3.7 % of GDP. By comparison, in Poland it was 3.7% of GDP in 2008, and 7.1 % in 2009. According to the European Commission it will be even higher in 2010. The increase in deficit in UK during the first years of Thatcher’s government was lower than Poland’s in relation to GDP in 2008-2009, despite the fact, that the fall in GDP dynamic in UK was more significant than it currently is in Poland. The consequence of the excessive deficit in our country is a growing public sector deficit. In 2008 it amounted to 47.2% of GDP. The European Commission predicts it is going to reach almost 54% in 2010. Meanwhile, as Thatcher’s government was in power the public sector debt was gradually falling: in the 1979-1980 financial year it amounted to 54% of GDP, and two years later had fallen to 52% of GDP.

From 1982 onwards, when UK came back to the path of growth, the Tories’ reforms were sped up. Margaret Thatcher did not waste this prosperous time, unlike the coalition headed by the Law and Justice did between 2005 and 2007 in Poland. Between 1982 and 1990 she cut the Personal Income Tax (PIT) and Corporate Income Tax (CIT), introduced a reduction to the healthcare premium from workers’ contributions, and:

– she reformed the welfare state. In 1982 she shifted the responsibility to pay out the salaries for the first eight weeks of employee’s sickness onto the employer.

Additionally between 1986-1991, as a result of tax incentives approximately 5 million people changed to private pension funds. New social benefits maximised the incentives to work. That same year, instead of a normal family welfare benefit, a welfare benefit for low income families was introduced. It was paid on the condition that at least one of the parents worked 24 hours a week. Finally, as the result of these reforms, and others starting in 1980, between 1982 and 1990 the pace of social-related expenditure growth in real terms could be maintained under the GDP dynamic. Therefore the share of social service expenditure as a share of GDP decreased by approximately 2.5 percent points, from 24.2% in the 1982-1983 financial year, down to 21.7 in the 1989-1990 financial year.

This was only a part of the Iron Lady’s reforms. In total, the share of public expenditure as a percentage proportion of GDP fell between 1982 and 1990 by over 8 percent points, from 47.3% to 38.9 %. Furthermore, despite such a broad program of reforms, support for the Conservatives was not significantly diminished: in the 1983 election they received 13 million votes, only 700,000 fewer than in 1979; and thanks to the collapse of the Opposition, they gained an additional 58 seats in the House of Commons. After a further four years of reforms, support for the Tories grew even higher. As can be seen, the reformers do not necessarily have to lose power, if their reforms are strategic, decisive and effective. Gradual reforms are like cutting off your own arm piece by piece, in the false hope that each cut will hurt less.

Rafal Osinski, PhD student at the Warsaw School of Economics

We would like to thank Mr. Konrad Mazurkiewicz for linguistic consultation.

The article contains the personal opinions reflecting the views of the authors, not institutions they represent.

A polish version of this article was published in Rzeczpospolita (Poland) on 27th September.

The Past and Future of Biofuels

To mention about high children poverty rate, unemployment and “There is no such thing as society”.

In contemporary Europe immigration is much easier, people show what they think just leaving the country.

More remarks on article
[I regret for any errors in english , I’m not a native speaker]

Some notes on the context

I was encouraged to develop my concerns about text above and add some context both waiting long for authors response and reading the reaction of one of common friends of mine and secondary author about the lack of exact arguments against the Thatcher economist policy : mostly, the lack of scientific publications on social policy etc. As the person who works only in a technical staff of a polish economic institute only for a few years and has academic degree in natural science I regret for my lack of deep knowledge of economics and politics and unavoidable cliche and errors then.

I do not consider the article above (published before in polish highly circulated newspaper ) as an strictly economic one. It’s really sounds to me more like a sentimental politics declaration. And I do not share known to me from the social networks discussions the right conservative point of view of the second author. I’m a sympathizer of democratic-liberal organizations like http://www.liberte.pl/ and supporter of ideas like open government or e-government.

This missing context appears to me a key to interpretation of this political text and its critique and whether authors do not want to be considered as a politics but as academics then the avoidance of discussion is inexcusable.

As a part of cold war and policy of ‘Airstrip One’ the Thatcher’s policy could be understood and estimated with its successes and faults.

But it could not be forgotten that : “Margaret Thatcher made two significant contributions to poverty in the UK. She massively increased it, leaving at the end of the Conservative tenure one in three children living in households with less than half the average income (the official definition of poverty). Then she said it did not exist.” http://news.bbc.co.uk/2/hi/special_report/1999/04/99/thatcher_anniversary/334316.stm