Mario Draghi’s government is about to approve an eight-billion euro tax cut – about 1.5% of the estimated 2021 tax revenues. Is this a credible a promise or just an illusion?
The restrictions that followed Covid-19 have taken a heavy toll. Last year, GDP dropped about 9%, tax revenues decreased, and government expenditure soared. As a result, the budget deficit reached around 9.5% of GDP. The 2021 figure should be about the same. Of course, public debt has also risen and is expected to reach 150% of GDP by the end of this year (see Fig. 1). 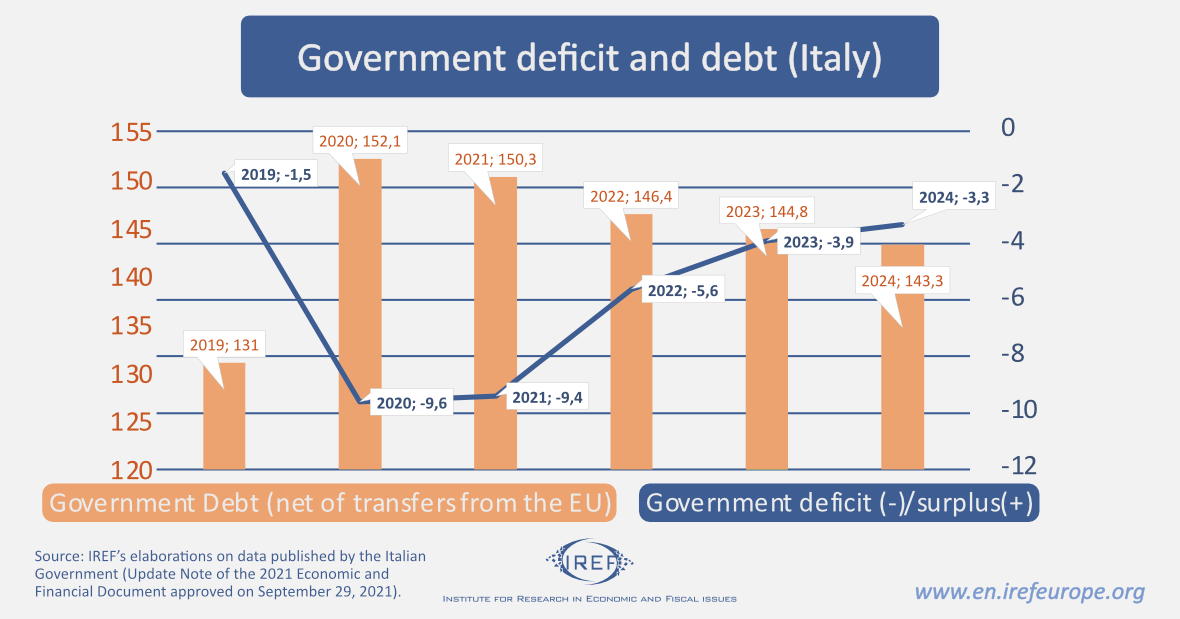 Yet, Italy is not bankrupt. The European Central Bank came to the rescue by buying large quantities of Italian Government Bonds. In 2021, the ECB purchased bonds for a value of 159 billion euros (equivalent to about 95% of the expected public deficit), and further resources are being injected through the so-called Next Generation plan.

Of course, most parties are now focusing on how to share the Next-Generation pie and pander to their constituencies. Certainly, cutting tax pressure is one of the options that would make potential voters happy. Under such circumstances, is the announced tax cut realistic?

Lower taxes when the budget is unbalanced

Of course, lower taxation is sustainable only if expenditure is also lower. This requirement is particularly stringent when the budget is unbalanced. Yet, cutting expenditure is not what Italian politicians have in mind. Public opinion strongly opposes all plans in that direction, while politicians believe they can keep handing out all sorts of gifts, regardless of the fact that the budget deficit widens and corruption rises.

Certainly, the Italian Tax System must be overhauled and the tax burden eased. However, there is not much room for maneuvering. Eight billion euros are a drop in the ocean and demands for tax cuts intensify. Trade unions and center-left parties ask for tax cuts on low to middle incomes workers and retirees. By contrast, right-wing parties (e.g., the Lega) argue that lighter corporate taxation should have priority.

Comprehensive reform of the fiscal system and tax cut

According to standard economic theory, an income tax should follow two principles. People with the same (or different) ability to pay should be treated equally (differently). Moreover, income taxation should not affect one’s position in the income ladder. The Italian tax system violates all these principles. Hence, people perceive the system as unjust and are encouraged to evade. Not surprisingly, some 50% of the Italian taxpayers pay no or very little income tax, while half of the income-tax revenues comes from the richest 20% of the population. 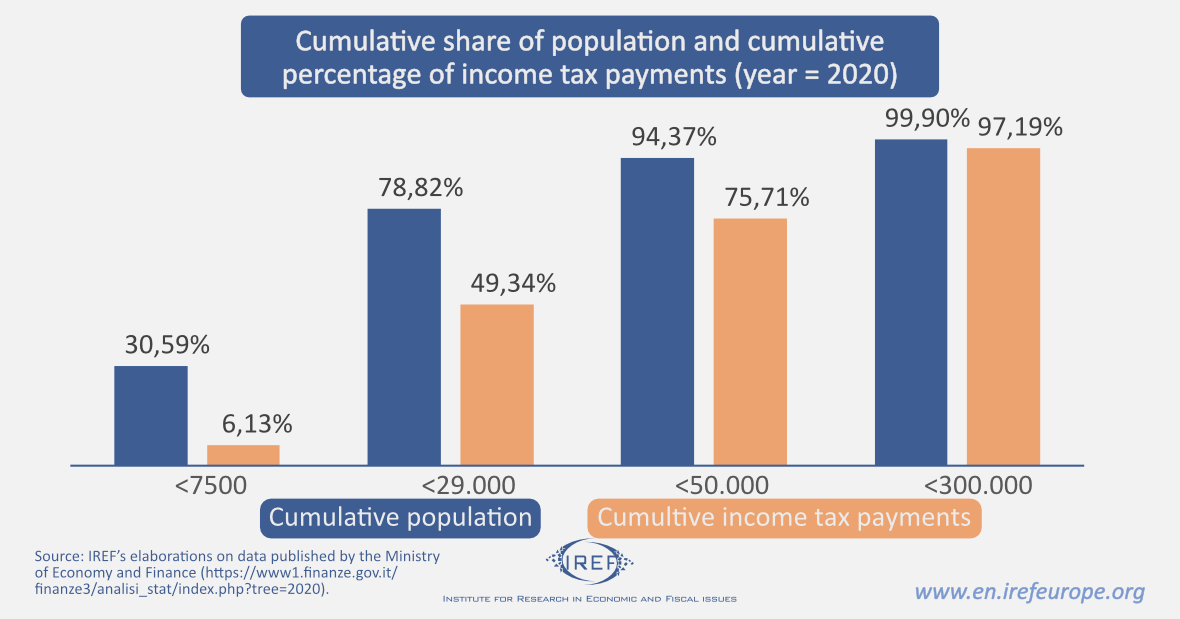 As mentioned earlier, an eight-billion tax cut is a drop in the ocean. Rather, the reform consists in reducing the marginal income tax (two or three percentage points) on those who make 15-50,000 euro, and increasing the burden (two marginal-tax points) on those making more than 50,000 euro. The eight-billion tax cut will not deliver the same advantage to all the taxpayers. According to the estimates, those with a yearly income around 50,000 euro will benefit from a 1,000 tax cut (on average), while the others have much less to celebrate (Fig. 3). 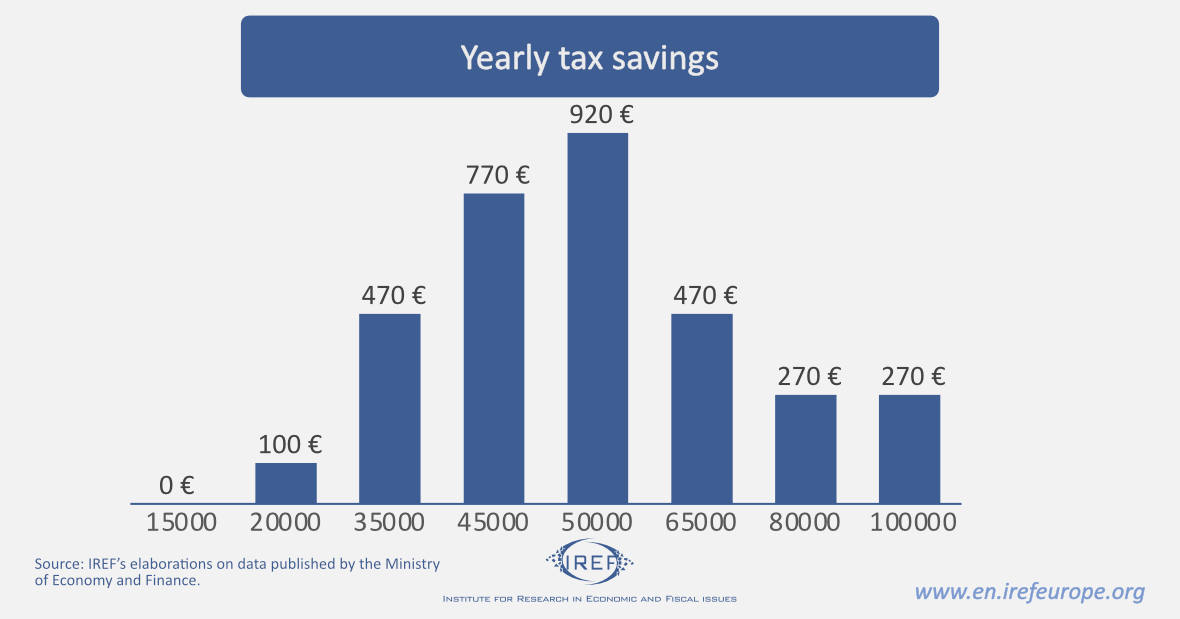 Indeed, one wonders whether such tax cuts will make a difference, and many believe that Draghi is missing an opportunity for deeper and more comprehensive reform.

Italian Puzzles: will the announced tax cut be real?
You judge the proposed income tax reform on the basis of the difference of the fiscal + benefits wedge as a function of income, but in my opinion that information is misleading and inappropriate for the scope, because of the giant flaws of the current fiscal wedge that the reform only partially attenuates, in the correct direction.

The study provided to the Italian Parliament (https://www.senato.it/application/xmanager/projects/leg17/attachments/documento/files/000/028/516/Focus_Ame_DEF_26.7_rev.pdf) shows that in Italy as of 2021 the marginal taxation is 90% around 20 KEur of annual income, 61% in the range 28-40 KEur, and _lower_ from 40 Keuro onward (order 54% until 100 KEur, then below 50%). In other words, Italy’s marginal taxation vs. income is mostly regressive and contrary to the Constitution.

To judge the current reform, you should compare marginal taxation vs. income before and after with the marginal taxation for a country with a decent overall tax+benefit system, such as UK, Germany or Sweden. If you do so you will see that the post-reform taxation is not equivalent but at least more close to any decent taxation system in any reasonable country.